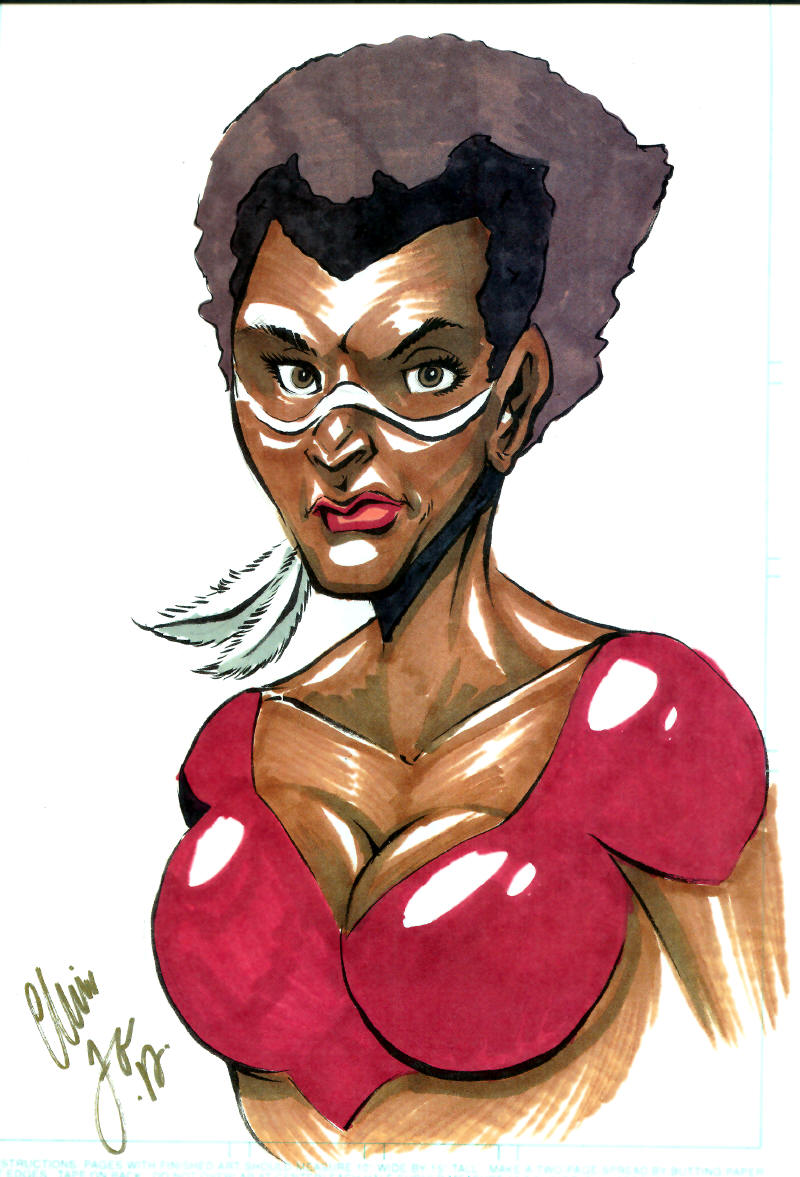 Chris Foreman has been on the local convention circuit for a while now, and does good trade on custom art cards. I wondered how he might like to handle something with greater dimensions though, and was happy to finally see the Blue Line pages I'd had mothballed since the '90s see some action. Looking through Foreman's CAF gallery, the images I liked best involved an unidentified African-American female (although I'm sure I found her name out at some point, but forgot where.) The pics aren't 100% safe for work, you can scope them here and here. I've wanted to increase focus on the Martian Manhunter's supporting cast this year, so she brought to mind Kishana Lewis from the underappreciated JLA: Scary Monsters mini-series. It seemed to me like Chris Claremont had a backdoor pilot in mind, so Lewis got a disproportionate amount of "screen time" as J'Onn J'Onzz's love interest and the salvation of the earth. After reading Joe Kelly's run on JLA, I can say with confidence that it would have been improved by both Faith and Scorch having been replaced with Kishana Lewis, but the neophyte heroine instead vanished at the end of her mini-series. Not all artists have a good handle on drawing black characters, but Foreman had shown that he did and could combine that with sex appeal and the more cartoony qualities of Lewis' co-creator, Joshua Hood. Seemed like a love connection to me.

The result was the above $50 full color 11 x 17" bust, emphasis on bust, as in stacked and packed with a fresh coat of wax. Those were some busy markers, and there's a funny demonic negative version on the back from bleeding through the paper. Kishana looks unusually pissy, like you're about to light a cigarette in the woods. Only you can prevent forest fires! Foreman pulled it together inside of a few hours on Saturday (if I recall correctly.) If you're bummed about missing out on his Martian Manhunter, don't be, because here's a 2010 Sketch Card, and there's plenty more to see at Chris Foreman's deviantART page!
Posted by Diabolu Frank at 1:26 AM

Kishana Lewis would have been more interesting than Faith and Scorch. My hope is that she can make an appearance in the new continuity.

Probably not, but I'd be happy to be proven wrong.