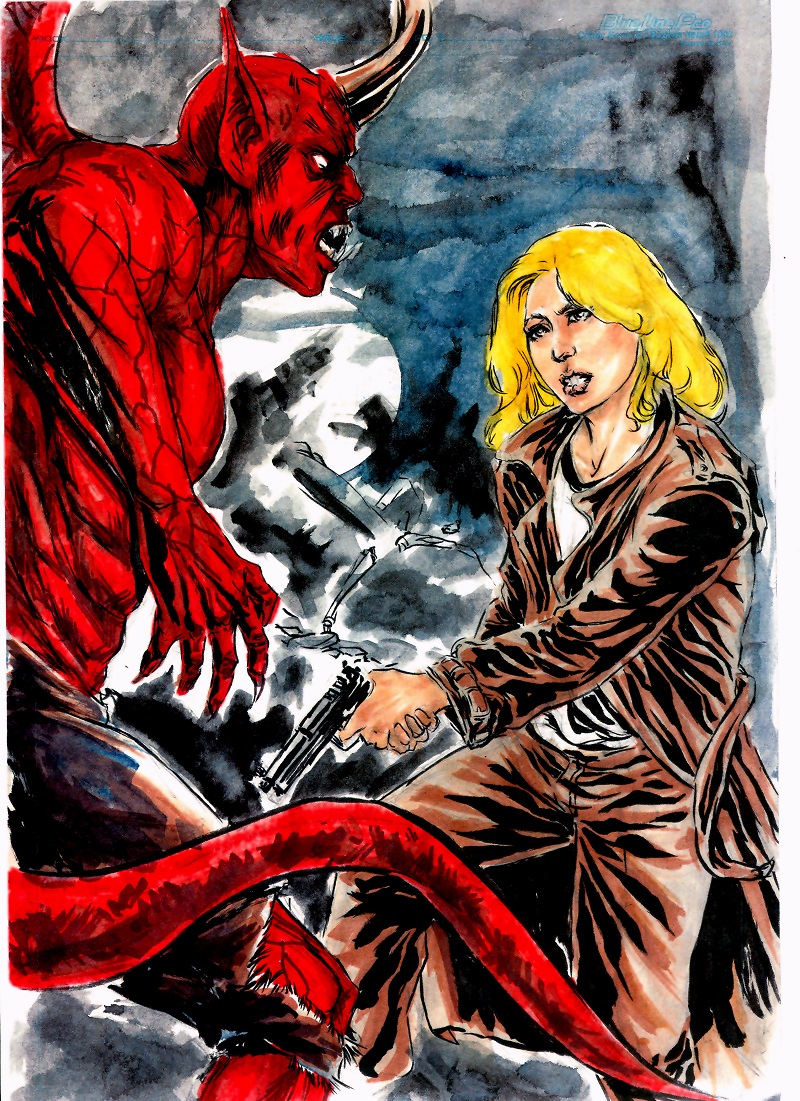 One of the great things about Space City Con coming after Comicpalooza is that it gave me a second chance to amend some oversights in my commission list. At a con, it's easy to get caught up in the heat of the moment. I didn't realize until after the weekend was done and I surveyed the artwork that in an anniversary year meant to spotlight the Martian Manhunter's supporting cast, "good guys" were poorly represented. Part of the joke was that this would be a "Happy Zook Year," and I hadn't gotten anyone to do the other-dimensional pet, so who better that Art Adams? Not only could I get it done, but I could get it done up mighty nice.

Cameron Chase starred in her own short-lived series in 1998 by Dan Curtis "D.C." Johnson (who unjustifiably faded out of the industry) and J.H. Williams III (who has since become a modern idol.) Chase was the daughter of a deceased minor super-hero who grew up to become a private investigator before being recruited by Mister Bones for the DEO. As an agent of the Department of Extra-normal Operations, Chase investigated metahumans in the DC Universe, as basically the F.B.I. of the cape set. If that sounds a lot like the more successful creator-owned Powers series that started a couple of years later, yeah, it sure does. DC only gave the book nine issues, and Johnson got to continue with the property for a few years as short filler material in their Secret Files & Origins books. Johnson wore a John Ostrander influence on his sleeve, and even before Chase ended, Ostrander began appropriating aspects of the book for his new Martian Manhunter series. Johnson was both flattered and flustered, since Ostrander revealed that a contemporary of Chase's dad was the Martian Manhunter in disguise (where Johnson had other plans for the Bronze Wraith,) turned Mister Bones into an adversarial presence (instead of a penitent ex-villain,) and penned the confrontation between Chase and her father's murderer Doctor Trap as part of his single issue wrap-up of Martian Manhunter. Cameron Chase appeared in nearly as many issues of Martian Manhunter as her own book, and had a major impact on the series, so she rates inclusion here. It's worth noting that Chase also turned up in most issues of the Kate Spencer Manhunter series, to affirm her bona fides for representation.

Vo Nguyen had done a villain piece for me at Comicpalooza, but thanks to theme months and my posting schedule, the Space City Con commission has gone up first. Amusingly, Nguyen was now sharing a booth with Chris Beaver, who has also done two full color pieces for me, neither yet published. I enlisted both for Comrades of Mars though, so we should see some Beaver before the month is out. Anyway, Chase was one of a few character options I'd given Nguyen, but lacking a prepared model sheet, I'd brought a copy of Chase #7 as reference. Nguyen chose Chase based on the cover-- but thought that I wanted him to draw the demon. I corrected the assumption, but Nguyen stuck with his choice anyway. Nguyen tends to like darker subjects, and was apparently hellbent on getting the commission and his demon too. For $60, I got two figures in fully painted color with a modest background and slick perspective. Never underestimate the power of the muse, let me tell you. The scan takes major liberties with the coloring, which are much more moody and subdued in the art, but that wasn't translating very well digitally. About an inch of artwork is cropped off the bottom, because I couldn't fit the full 11 x 17" board on even a FedEx Office copier. I didn't have the same issue with the sides, and the white portions you see are only on the scan, since Nguyen filled virtually every bit of the board. He used his own Blue Line Pro paper, but you can hardly tell, because it is so soaked in paint that it might as well be an unstretched canvas. I need to get this framed and on the wall, because it is a fantastic piece that demands to be displayed!

Posted by Diabolu Frank at 3:00 AM

Whoa. I completely forgot about Cameron Chase! This is quite the piece. I love how she's rendered, her pose is great, and I love the moody, atmospheric coloring. Beautiful!

Now THAT is a great commission.

Congrats on getting that piece of art.