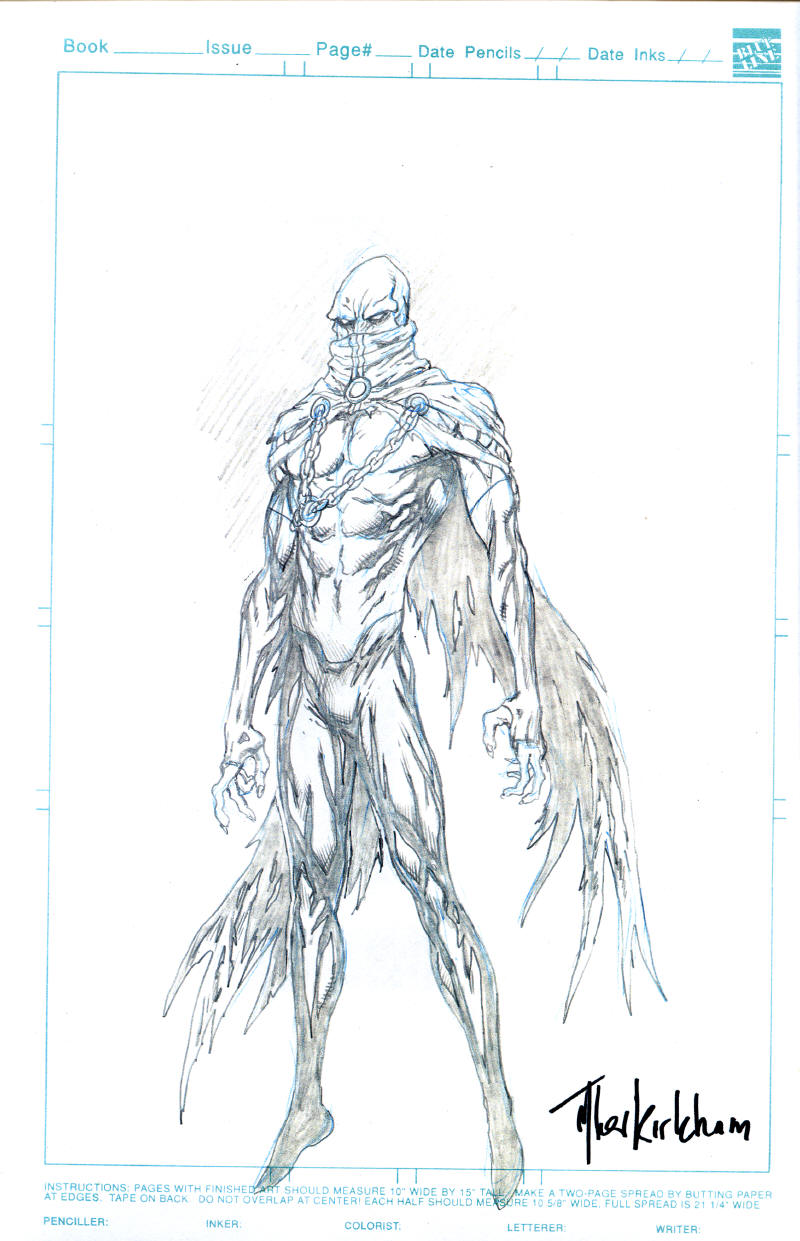 When Malefic was introduced in 1998, I felt an early dislike toward him. Co-creator John Ostrander took serious liberties with the Martian Manhunter’s Post-Crisis backstory, including the invention of J’Onn J’Onzz’s evil twin brother, a concept so trite that only intentionally campy soap operas trod that ground anymore. It didn’t help that Malefic wasn’t just evil, but eeeevvvvviiiilll in a one dimensional, comically grandiose and completely under-motivated way. The guy didn’t just up and dub himself a negative adjective—his mother actually named him the phonetic Ma'alefa'ak. Ostrander’s a major Shakespeare geek, so I can see where Malefic raping his sister-in-law and murdering his mother comes from, but the guy took the spontaneous crazy to such genocidal extremes that I could never take him remotely seriously. I also had issues with designer Tom Mandrake’s inconsistent presentation on his own character. Sure, he’s a shapeshifter, but as a reader it bugs me when the dude is basically J’Onn J’Onzz in fetish gimp gear one minute, and a scrawny half-naked green Joker the next. Malefic came to represent everything I hated about the Ostrander/Mandrake run, not to mention some of the worst clichés of ‘90s comics in general.

The thing that turned my opinion around was traction. It was one thing when Ostrander steadily used his arch-villain, but other creators noticed, and employed Malefic in their work. People had heard of Malefic, and were using him instead of assigning the Alien Atlas some other common (and often seemingly random) foes like Doctor Light or Libra. This year, Ma'alefa'ak became the first member of the Vile Menagerie to make the leap to animation ever with Justice League: Doom, immortalizing him as THE Martian Manhunter villain. It didn’t matter what I felt anymore, because Malefic was in the comic consciousness now, so I had better jump on board or get out of the way.

Thanks to alterations made to the character in the cartoon, I’ve found I’m happier joining in. Rather than the anglicized “Malefic,” the filmmakers referred only to the Martian name Ma'alefa'ak, which they further distanced from Chromium Age silliness by rendering it phonetically the vaguely Arabic “Mallah-fah-ahk.” Doom had an uncommon equal opportunity fan service design aesthetic wherein the male villains were given new uniforms as sensually charged as the villainesses’. Ma'alefa'ak's cartoon costume strongly echoed pioneer of the underboob Marc Silvestri’s Madelyne Pryor Goblin Queen from The Uncanny X-Men. This curiously strong sexuality carried over to the portrayal of the character. Despite being a twin to J’Onn J’Onzz (with the same voice actor playing both,) Ma’alefa’ak assumed the form of an alluring Caucasian female to seduce the newly African-American John Jones at a bar why slipping him a micky. One of the things I loathed about the Ostrander series was its fixation on duality, a tired theme in super-hero comics. A shapeshifting race should be much more multifaceted than that, but Martians have always been portrayed as positively nuclear in their family values. With one scene in a cartoon, Ma’alefa’ak exploded the notion of Martian gender identity and familial relations, and did so in the manner of Bugs Bunny by going stealthily through what many would consider to be an inappropriate, “safe” medium. I was hugely impressed with the daring calculation involved to pull such a stunt off, not to mention the layers it added to the character. Ironically, the cartoonish serial killer of the comics gained new sophistication through animation. 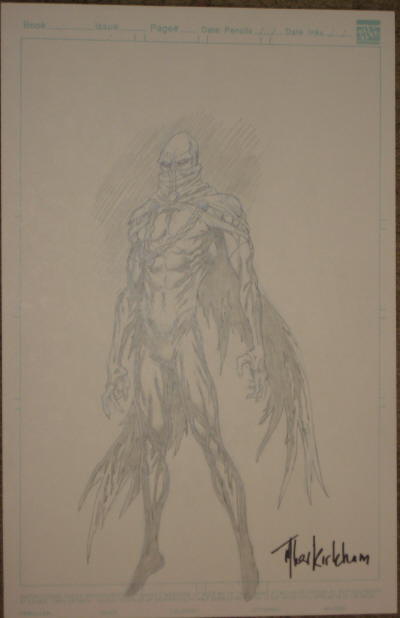 Malefic has always been a popular character with blog readers, but due to my own misgivings, I’d only shelled out for one commission going into 2012. One thing I wasn’t able to find after Doom was a character design sheet, so I did my best to gather reference from the cartoon itself to have a new commission made, killing two birds with one stone. This year’s Comicpalooza skewed heavily into the Top Cow school of art, and since I’ve already noted the Silvestri influence in the Doom suit, I figured to take advantage of that. Now, I also wanted to get my first Despero commission at this year’s show, but my first choice for that commission cancelled ahead of the show. For diversity’s sake, there was one “hot” artist at the con whose style really bothers me, but the problem is mostly with faces, of which Malefic has about three-quarters covered no matter which costume he wears. However, said artist either wasn’t doing commissions, or was charging too much. I can’t recall which, because I was more relieved than annoyed at the prospect of moving to another artist.

Tyler Kirkham has a flashy look that has served him well on a number of popular titles, including Green Lantern: The New Guardians and Ultimate Fantastic Four. There were plenty of characters I thought would be a good fit for Kirkham, so I didn’t fret overly much about who I’d get him to draw. He was my first choice to pick up the Despero torch, but another artist chose him when given a selection. Once Malefic was back in play, it seemed like Kirkham was the best choice to give the character the pizzazz he deserved. I wasn’t confident that I could still make it happen though, since I didn’t approach Kirkham until late on Saturday. His dance card was plenty full, but he seemed legitimately jazzed to draw Malefic, and made room. 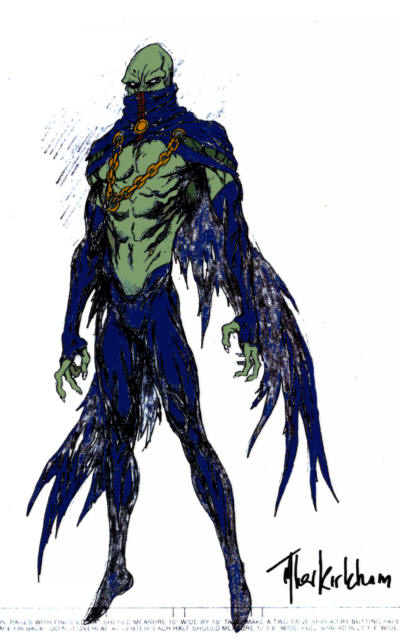 Kirkham wasn’t able to start until Sunday afternoon, so I wasn’t sure if it would get done before the end of the convention. Thankfully, I needn’t have worried, because Kirkham was a total pro who knocked this baby out of the park in time for supper. As you can see, there’s no shortage of detailing, and I really dug the lean, tight musculature. The elongated, gnarled fingers are wicked, while the pin-striping and links of chain are keen. For some reason, no matter how much I darkened the Xerox at FedEx Office, I could not get Kirkham’s background shading around the head to come through. I took a crappy picture of the board so that you guys could get an idea of how it looks. Definitely worth a c-note, I'd say.

For some reason, everybody I gave my nearly twenty year old Blue Line pages to drew on the lined side, then spilled over into the print, instead of just turning the page over to the blank side. I like to think that when they started the piece, they planned to draw within the margins, but ended up having too much fun with these wacky characters to leave them at that. Kirkham really made Ma’alefa’ak look like an A-lister, and while he went slightly off-model from the cartoon, I honestly prefer his approach. I can appreciate how giving Ma’alefa’ak bare feet was a bold statement and continued the gender play, but at the same time, sick boots stimulate the bitchin’ gland in fans' brains more than Red Planet Toe Cheese. There is such a thing as too gay, especially when dealing with intentionally ambiguous characters, as any reader of the old New Guardians can confirm. Right Extrano?

Check out Tyler Kirkham.com for more, but don't blame him for the awful paint coloring job I did below! I was just curious to see how it would affect the piece, and I like it, but clearly an inker and colorist are required to do it right. This wasn't the only Malefic I got this year, and proper practice of both disciplines will come into play...
Posted by Diabolu Frank at 12:57 AM

This is a great piece. I like the shading and the colors.

I tend to look at the Ma'alefa'ak/J'Onn relationship as one that can in the right hand echo many other conflicts. The problem is that Ostrander seemed to have no idea of previous continuity. Now, we have a much better rounded character who may be one of the few villains that could freak out the Joker. (The Joker wants an audience as it makes it easier to get the attention of the Dark Knight.)

This is amazing. By any chance do you think Ma'alefa'ak will be making any appearances in comics soon.

James, I strongly suspect that we'll see Ma'alefa'ak as part of the Secret Society of Super-Villains in the early issues of the new Justice League of America. Johns did the commentary track for Doom, and was working with Dwayne McDuffie to launch a new Martian Manhunter series before his untimely death. It seems like some of their discussion is finding fertile soil in the New 52.