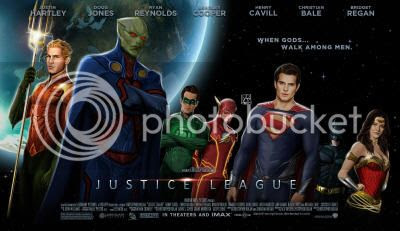 I've spent months off and on working on a series of articles about the DC cinematic universe, some of which were featured on this blog (George Miller's abandoned 2007 Justice League: Mortal film, DC's Super-Media Relevancy) and others elsewhere (Warner Brothers versus Marvel Studios.) Those efforts conclude this week, as I do daily posts on each of my DC blogs, starting with King of the Seven Seas: Hooks for the Aquaman Movie, and likely wrapping here over the holiday weekend. In that time, I've looked at a lot of cheesy fan made movie posters for the proposed Justice League movie. Most are shabby, some are nice, but very few are great. This piece by digital artist Daniel de Almeida e Silva, working under the pseudonym "daniel-morpheus," is far and away the best I've seen (and seen often, as it is widely, justifiably used when the subject is discussed online.)

"And finally, my poster for a Justice League Movie. Made on Photoshop CS2 with a Wacom Tablet.

In the cast, we have:

This poster is too a tribute to the cover of JLA Gallery (1997) made by Frank Quitely."

Hartley played both Aquaman and Green Arrow on two different shows, and was solid in both, but I think the silver screen demands a bigger name. A purely CGI J'Onn J'Onzz would be well served by mo-cap king Doug Jones, so long as someone like Avery Brooks provided the voice acting. Everyone else has either already played the designated heroes or are serious contenders, except whoever that chick is as Wonder Woman. I'm currently leaning toward Gina Carano myself.

I've always liked the cover this art was based on, and in some respects even does the source one better. I don't miss Electric Blue Superman on pirate Arthur. I was fine with the One Year Later Martian Manhunter costume in comics, but as rendered here, the Alien Atlas is probably the best dressed of the lot. The textures and alterations de Almeida e Silva made were well thought out, and I especially dig the red bands running along J'Onzz's throat. I've praised the New 52 suit, but this one beats it, hands down.

Behind the Scenes
Posted by Diabolu Frank at 12:00 AM

I really like this poster, especially J'Onn's uniform -- it looks very dignified and the details by the neck are very good.