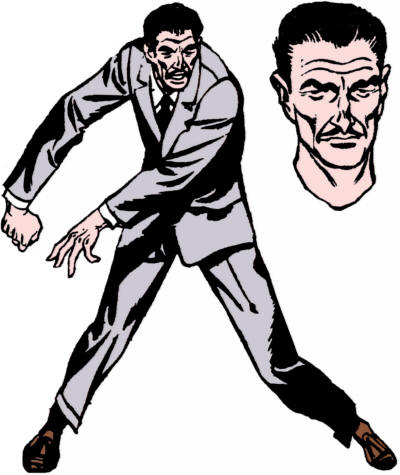 History:
The criminal mastermind Alex Dunster vexed the entire Middletown Police Department during a series of heists targeting scientific and technical equipment of extraordinary value. Dunster's first recorded strike was against the Benton Optical Company, where he stole valuable lenses being developed for the U.S. Army under cover of tear gas. Next, he targeted a chemical plant using devices that allowed him to overcome the powers of the Manhunter from Mars. Finally, back at his secret rural laboratory, Dunster was able to possess and accurately employ the teleportation device of the scientist that had inadvertently brought J'onn J'onzz to Earth. While Dunster had planned to use it to establish a perfectly inaccessible hideout, he instead destroyed it while trying, and failing, to evade capture by Detective John Jones.

Weapons:
Alex Dunster carried a chest-mounted "giant hearing aid" that allowed him to register sounds at great distances and through dense structures. He was armed with an "electronic ray" rifle which fired a blast of considerable range that would kill any Earthman and could temporarily incapacitate a Martian. Dunster's car was fashioned with special rubber tires of unknown value.

Quote: "In one stroke, I've reaped the benefit of his vast scientific knowledge!"

Created by Dave Wood & Joe Certa
Posted by Diabolu Frank at 12:00 AM