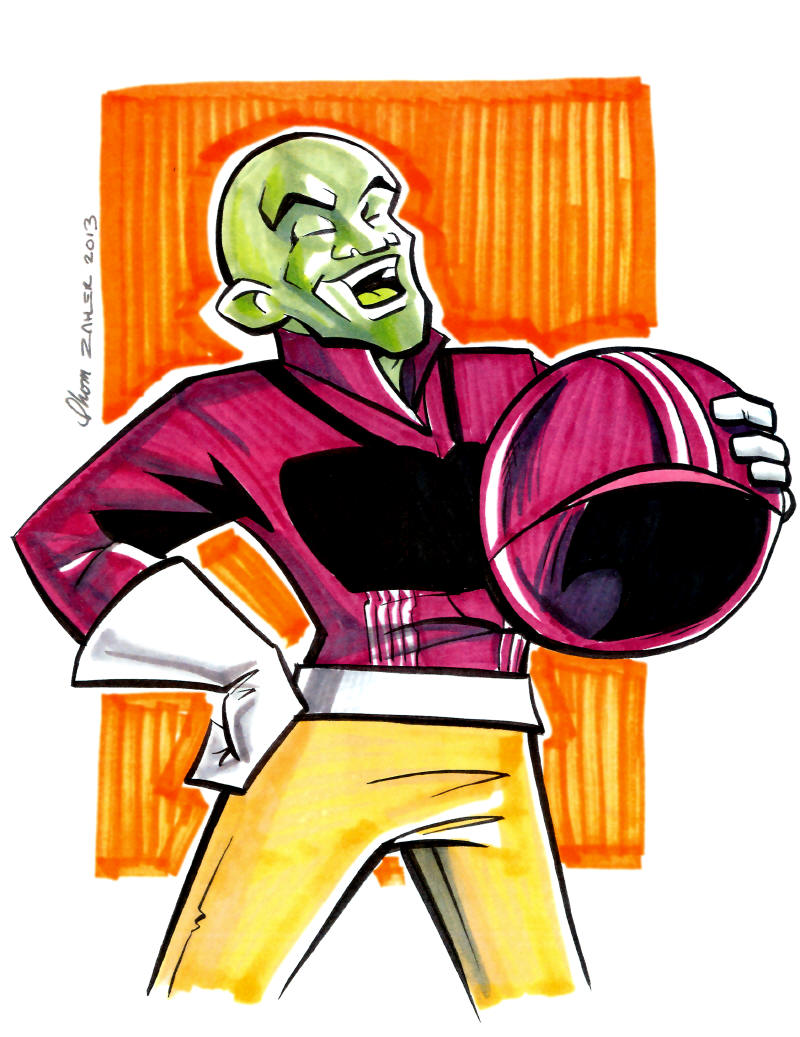 There was some ambiguity on my end as to who I would get to do what at this year's Comicpalooza that frankly stressed me out, so it was good to run into Thom Zahler and have him do one of the first commissions of 2013. I have a whole list in my head of characters I want to see him draw, and even considered contacting him to produce something via mail order, but it seems to take the now-or-never nature of a convention to get me properly motivated. Another reason he's a good first contact over a con weekend is because he's such a good guy, starting the con off on a positive note. He's recently been doing work on My Little Pony, which brought a lot of little kids to his table, for whom he doled out renderings with a gentle patience and sweet nature. Zahler's also enthusiastic about the medium as a whole, and even slogged through the entire 4½ hour Fire and Water Fiftieth Edition DC Sampler Podcast while stuck in L.A. traffic. Zahler was complimentary of the grueling but giddy episode, and I should probably point out for Rob's sake that he did an Aquaman & Mera piece at the con. He was happy to tackle another one of my obscuro characters as well, although he noted that I had competition this year from Sister Voodoo. 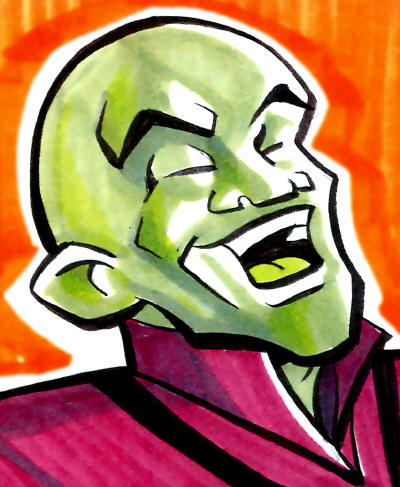 I totally dug Zahler's Roh Kar commission, and figured his retro-funky sensibilities might help redeem another Silver Age bit of silliness, Vulkor, the Capsule Master. Despite having some modest historical significance and a solid story showing, Vulkor has never performed well in any of this blog's polls or been shown much love in general. I gave Zahler a copy of Vulkor's one comic appearance and carte blanche in interpreting the character, and was pleased by how he humanized the Martian crook. Vulkor wasn't featured in all that many panels with his comically large helmet, and only one spare panel unmasked. Zahler ran with it, giving Vulkor a broad flat nose and angular features that could be inferred from the 1960s drawing, but were only truly realized at Zahler's hand. Vulkor's open collar and cavalier attitude imbue the character with personality that couldn't be conveyed through his near featureless purple dome in the original story, and his gloves are accentuated to give the Capsule Master a more daredevil fashion sense. Appreciate the lighting effects employed here, putting true flesh on the bones of Vulkor as originally presented. This 8.5 x 11" piece gives the character a spirit lacking in his debut, and Zahler is to be applauded for it. If you'd like some art of your own, these are check out Zahler's commission gallery and rates!