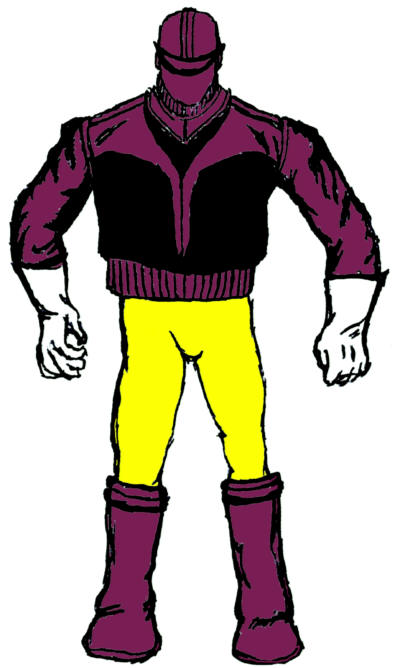 To wrap up the extended Capsule Master weekend, I thought I'd over-share. I had some down time at work the other day where I was paid to be very bored and briefly engage the occasional caller/visitor. Frustrated by the state of stasis, I decided to bring up some Vulkor posts on my phone and try to tweak the character's design on a scrap of paper with a ballpoint pen. I'm not saying a pencil and better overall conditions would correct my failings as a drawer, just that I hope you'll forgive the additional elements for eyesoredom.

Anyway, Vulkor's color scheme is wonky, but unlike any other that comes to mind, and he's a fair bit more stylish than most of the Alien Atlas' Silver Age foes. I figure the main reason he gets no respect is because he shops at the same store as Dark Helmet. I thought I'd try my hand at a sleeker, more sinister dome, but otherwise hued very closely to the original design (though not so much reasonable proportions and proper body mechanics.) It ended up reminding me of the minor Flash villain Plunder, though I think it better suits Vulkor (plus Plunder was so very much a '90s holdover unwelcome in the 21st century anyway.)
Posted by Diabolu Frank at 12:00 AM

I know this is a MM blog, but what are your thoughts on WB officially announcing a Superman/Batman movie?

I was thinking about addressing this in Tuesday's post, since Martian Manhunter news out of SDCC was scant but worth noting. Sounds like a plan, then...