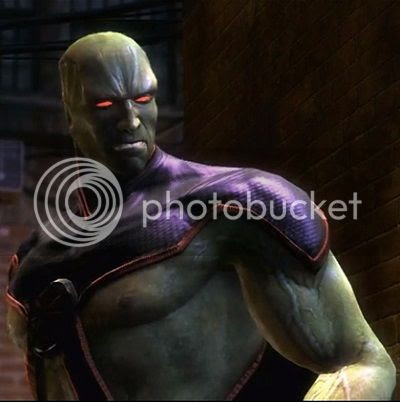 I went to a comic convention, then disappeared on a lengthy road trip through 1, 2, 3... 16 states and then almost immediately started a new job. Getting blog stuff done has taken a hit as a result, though I think it's been felt mostly outside the Idol-Head. Today though, I'm coming off a punishing series of long days that have really reminded my body that it's middle-aged, so I have no go-juice in the tank for posting. Thankfully, an anonymous commentator alerted me that the Martian Manhunter has become a downloadable character for play in the very popular NetherRealm Studios video game Injustice: Gods Among Us. While the game featured most of the iconic DC heroes and a fair amount of villains, the developers intentionally held back on playable characters with the intention of offering them later as downloads, thus extending the playing life and promotion of the game. Lobo, Batgirl (Barbara Gordon,) the Mortal Kombat character Scorpion, and General Zod were released as part of a pack earlier this year, with Martian Manhunter the first entirely new character to be offered since the pack. The Martian Manhunter has had quite vocal fan support in relation to the game, and this demand was in part responsible for his late inclusion in the game.

In the trailer, we see a mid-80s style private investigator John Jones in a dark alley transform into the New 52 version of the Alien Atlas and fly off. He lands on the Justice League satellite from the animated series, and once again voiced by Carl Lumbly, proclaims "I will defend Earth." He then confronts John Stewart, a new Green Lantern skin, which is to say Stewart has the same moves as Hal Jordan used in the game, with only the principle figure altered. J'Onn J'Onzz proceeds to throw Stewart a beating of such magnitude that you would think it was a deleted scene from Cosmic Odyssey. The action is incredibly fast, but I spotted Martian Vision, invisibility/intangibility that mimics Bloodwynd style teleportion, lots of super-strength blows, a Cay'an style psionic pulse blast emitted from his palm, some weird ranged energy manifestation, and elongated arm punches.

J'Onn takes a few good hits, most spectacularly when he's caught in a furnace blast of flame from a rocket launch, but he recovers immediately and continues his spotlight assault on poor Green Lantern. Stewart is thrown through a line of Javelin-7 spaceships, falls into a ventilation shaft, and is speared by the nose of one of the ships that fell in after him. J'Onzz makes up for his lack of quality smack talk ("Do you not listen to reason?") with some vicious moves (like close quarters Laser Vision to the face) and a killer finishing move. J'Onzz draws Stewart into a telepathic recreation of Mars, temporarily assumes Stewart's form, punches him into the sky, then appears as a colossal giant that smashes Stewart between the boulders J'Onzz has in each mammoth hand while roaring. The trailer ends with a close-up on the Martian Marvel's glowing red eyes, then adds a stinger of him in his New-52 Natural Form seen in recent Justice League of America issues for a slow pull-back on the Red Planet.

I've recently advocated a low cost simplified Martian Manhunter movie, but this trailer provides a compelling counter-argument for fierce and flashy demonstration of J'Onn J'Onzz's vast array of abilities. It sells the Martian Marvel as a seriously bad ass force, and makes great use of his snazzy current outfit. I expect I'll be watching this again and again...
Posted by Diabolu Frank at 3:48 PM

This was awesome. He looks like a beast. So many people wanted him that every poll Boon put out he won. The New 52 is making people wish they cared for this character more pre-52. I think MM might become a overused character in this fighting game.

Anyways whats your thought on Scribblenauts Unmasked and Batman Arkham Origins? I'd love to hear your thoughts. Also do you play Injustice? Finally, have you heard that DC is making their next animated movie about the New 52 JL origins?

Yeah, this made me so happy. A kickass, good looking MM in and Netherealms game. John Jones Hairstyle is a little... weird, though.

This was very good, I just wished it was Kal-El getting his clocked clean by J'Onn -- especially after watching the other video selection featuring J'Onn as a jobber. There should be a group of heroes and heroines in the DCnU who can stand up to Superman and give him a fair fight as equals -- Captain Atom, J'Onn, Kara Zor-El are among those names that come to mind.

Anonymous, I haven't played video games with any regularity since the late '90s. My opinion of gaming isn't of much value. Aesthetically, I dislike the Batman: Arkham games, finding the character designs unimaginative and pandering to the lowest common denominator. I hear they're exciting to play, though. Scribblenauts Unmasked seems to be continuing the push of the New 52 Martian Manhunter design into multimedia, which I approve of, and it appears likely they'll get in a few more cute variations besides. Again, I've never played the actual game. I'm certainly glad to see J'Onn J'Onzz out there in gaming, since he's been abandoned in animation. I doubt he'll turn up in Justice League: War, and if the story is as horrible as the source material, I'll have no problem skipping it entirely.

MC, what do you mean by " Hairstyle?" John Jones' shag? I could have used more brow, but the Manhunter's head shape in consistent with the design of recent years.

Will, I share your egalitarian stance on super powers in the DCU. I think it's a funner universe when one guy isn't head & shoulders above all others.

Right before he changes from human to martian, at about 0:17... looks like a bad rug.

Hopefully there will be more JLA video games out there. Something that's a little more than just 2D Mortal Kombat-style fighting.

Sounds like you've been busy, Frank. Hope the transitioning is going well!