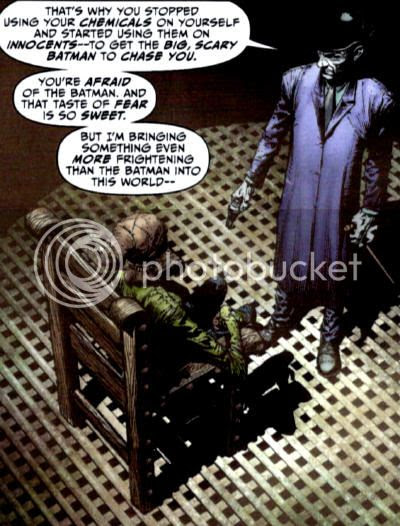 A gaunt, porcelain-skinned man dressed in purple with a bowler hat and cane addressed the Scarecrow, who was bound to a chair in a dimly lit room. The man was willing to offer the Scarecrow freedom from captivity, both the chair and the asylum he had been taken from, in exchange for a debt of service to be determined later. Scarecrow was hesitant, but convinced by the promise of an introduction to tantalizing horror of the sort a fear junkie couldn't refuse... Later, the mystery man learned from Professor Ivo that an intruder in their midst had escaped them, and was displeased that Ivo had not chosen to engage A.R.G.U.S. to collect the Dark Hunter...

In Washington, D.C., the heroes invited to join the A.R.G.U.S.-sponsored Justice League of America were meeting for the first time in their new headquarters. Two walked in together...
"My friends call me J'Onn, Katana."
"I do not mean to be dismissive, Martian Manhunter, but I am not here to make friends... However, I will cut anyone who attempts to harm my teammates."
"That is appreciated." 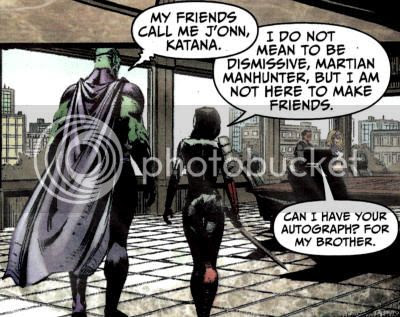 Vibe and Stargirl were already waiting, and the quartet was soon joined by Catwoman, Hawkman, and Colonel Steve Trevor. Green Lantern Simon Baz was absent, and Selina Kyle wasn't to be a publicly known associate, but the rest of the team was off to a press conference headed by President Barack Obama to introduce the team to the world.

Later, Steve Trevor asked the Martian Manhunter if he could help access the reconnaissance in Oliver Queen's mind. "There is still some cerebral edema that could leave the information I retrieved limited or fractured, but yes, I can do that... Are there any behavioral issues that should be addressed while I'm in here?" Steve was shocked by the offer, wanting only to read the mind rather than change it. His question as to whether J'Onzz had ever done such a thing to someone he knew went unanswered. 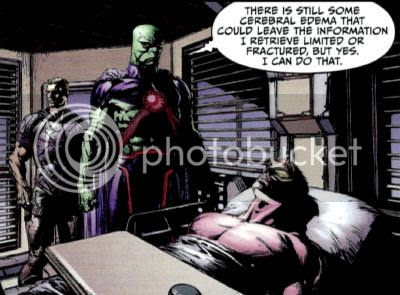 Inside Oliver's mind, Green Arrow sat on a minuscule island amidst a sea of red-- perhaps sand, perhaps on Mars. J'Onn J'Onzz approached on foot. "Stay back. I know who you are. I made a fire." The Manhunter assured him that he meant no harm, but rather sought those who had hurt him, and penetrated further into his psyche. Queen recalled his role as the Dark Hunter, how he'd been found out and confronted by the mystery man. Queen used a secreted arrowhead to escape his bonds, but was brutalized by a figure resembling Batman on his way out of the Society's castle into the forest. The Sleuth from Outer Space had learned all that he could without risking Queen mental damage.

The Justice League of America landed their jet a mile outside the forest in England, then traveled on foot. Catwoman was dubious about the prospect of a Secret Society of Super-Villains that she'd never heard about. J'Onn J'Onzz argued, "I've interrogated dozens of super-human criminals... None of whom have heard of it. Their recruitment must be highly selective." Katana vanished from the group, and while Vibe tried to call out for her discretely, Trevor asked the Manhunter to get a lock on her. "I... I can't. Something's blocking my telepathy." Something flew past the group. Catwoman disappeared, A golden lasso caught Trevor around the neck like a noose. "Steve," said a figure who appeared to be Wonder Woman, "You shouldn't have come here." She was flanked by approximations of Superman and Batman...

Katana's outfit is so cold I can hardly get over it. Functional modern style with Japanese accents. Props to the designer.

Man I was dying out here for you to review this.

Oh and btw have you seen this.
http://youtu.be/UQbph1KUo9g

Anonymous, I'm trying to catch up on the JLofA coverage. The unread issues were piling up, and I want to check out J'Onn's interaction with the Outsider. I went looking for one of those Injustice profiles a few weeks back, so I'm glad one finally got posted. I'll probably run it tomorrow.