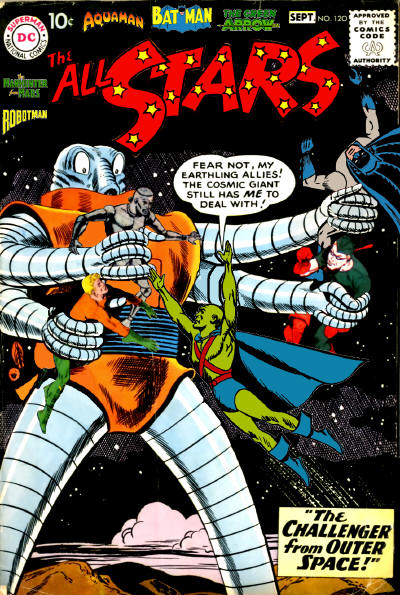 Jack Schiff had never been a popular editor with National management, especially during the McCarthy years when he was seen as the house pinko. While Julie Schwartz had been doing well with super-heroes, Schiff was losing sales on Batman, Detective Comics & World's Finest. Meanwhile, Schwartz's Justice League of America had performed so well in its three issue The Brave and the Bold try-out that it graduated into its own series. Infamously, Irwin Donenfeld had bragged about the sales the Justice League was posting to competitor Martin Goodman, who immediately set about attempting to copy the format with Lee & Kirby's Fantastic Four. Superman editor Mort Weisinger caught wind of this, and conspired with Jack Schiff to steal everyone else's thunder by creating a super-group of their own.

Previously, Shwartz had been denied routine use of Schiff's Batman and Mort Weisinger's Superman in Justice League of America, since it was felt their constant appearance might dilute sales of the heroes' solo titles. Weisinger still felt that way about the Man of Steel, and browbeat Schiff into excluding Robin from the new group to avoid biting into sales of World's Finest, though both would be available occasionally to the new book. That left Schiff with Detective Comics stars Batman and J'onn J'onzz, the Manhunter from Mars, as well as the World's Finest feature players Aquaman and Green Arrow. The Sea King had a four issue trial run in Showcase that would be promoted to a solo title in early 1962, so a team book would be an excellent platform to help with the launch. Green Arrow had made guest appearances in Justice League of America that heightened his visibility, but obviously that was done with now that he would have his own editor's group to serve. Obviously, the loss of players forced Schwartz to reconstitute the JLA, but perhaps two books would better serve National than one? Feeling a quartet was a tad diminutive, Schiff dug up Robotman, a feature last published in a 1953 issue Detective Comics but seemingly more current in a science fiction fueled environment. 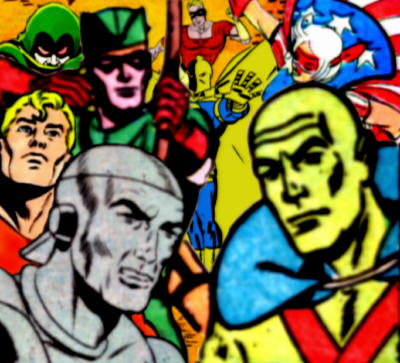 All-Star Western, the birthplace of the Justice Society of America under its original title All-Star Comics, was set to be canceled with #119. Julie Schwartz grudgingly agreed to instead turn the book over to Schiff for the new team feature, and the title was simplified to christen Schiff's group "The All-Stars."
House ads allowed Superman himself to champion, "My personal friends, the latest and greatest collection of champions ever assembled, has finally arrived!" Featuring a Bob Brown cover, The All-Stars #120 was released on June 29, 1961, six weeks ahead of Fantastic Four #1, and was greeted with robust sales.

Ed Herron was in place on scripts from the first, with '50s favorite cover artist Win Mortimer on interiors for the first few issues, followed by the likes of Mort Meskin, Bernard Baily and Ruben Moreira. The plots were boilerplate monster of the month fare, but Herron instilled a sense of comradery in the team that won over fans. Frequent team-ups with other Schiff-edited properties such as the Blackhawks, Challengers of the Unknown, Time Masters, and Doom Patrol helped spice things up. Batwoman, Doctor Fate, Johnny Quick, Liberty Belle, and The Spectre would expand the membership, and of course the kid sidekicks got their own spin-off title, as did the Martian Manhunter. While Mort Weisinger's ideas often led Jack Schiff down unfortunate paths, but this one gamble yielded big!

Posted by Diabolu Frank at 3:12 AM

Am I imagining things or is this simply the cover to Challengers of the Unknown #12 which I believe was published in 1960. The only difference is the placement of Batman, Robotman, Green Arrow, Aquaman, and Martian Manhunter. Is this was a parady, I fell for it.

It is, and I thank you for the compliment. I like to play around in a more Martian Manhunter favorable alternate reality now and again. If you click the picture, it links back to the original Challengers cover.