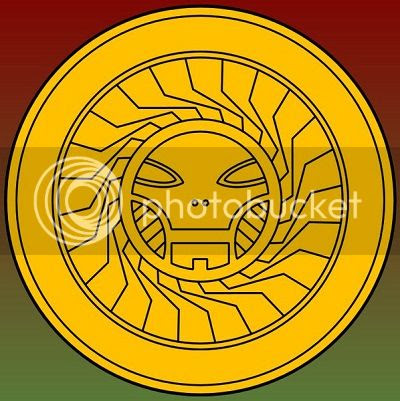 “I thought the "Kuru pendant" J'onn J'onzz had in the post-Infinite Crisis Martian Manhunter miniseries was pretty cool looking, so I drew up a vector version and created a wallpaper based on it. While I've generally come to want to avoid using simple strokes for interior details, in this case I still think it was the correct approach. And in the absence of a better idea for a background, I went with a red-green gradient for two of the dominant colors in the Manhunter from Mars's color scheme.”

While the Kuru Pendant was meant to apply broadly to Martian culture, I'll understandably always associate it with Cay'an, so it makes sense to run this the same week as my Vo Nguyen commission of her.
Posted by Diabolu Frank at 5:59 AM

I have absolutely no memory of this. Okay, I'm starting to think parts of my comics continuity memory have been wiped. Maybe I'm just getting old. All I remember is the pie symbol. And the cabochon.

In practice, it was the Cay'an symbol.