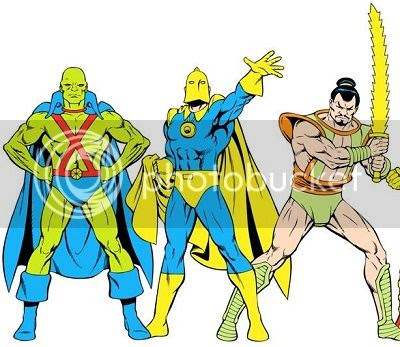 José Luis García-López famously set the standard for the looks of DC characters across their merchandising via style guides produced in the late 1970s to mid-80s. However, some minor characters were beneath García-López's notice, and were farmed out to artists I've never been able to identify (although Ed Hannigan's comes up around some examples, like this.) Above is a piece I've never seen before in total, but components have turned up here and there. That crude looking Martian Manhunter was used as the character's image for his official biography page on the DC Comics web site in the late '90s.

Doctor Fate was in the same 1985 Super Powers Collection toy assortment as J'onn J'onzz, plus he was sort of the Alien Atlas' parallel hero on the Pre-Crisis Earth-Two, for want of a legitimate analogue. Samurai was one of the multicultural heroes introduced on the Challenge of the Super Friends cartoon in 1978, but he had to wait until 2011 to get his own toy. 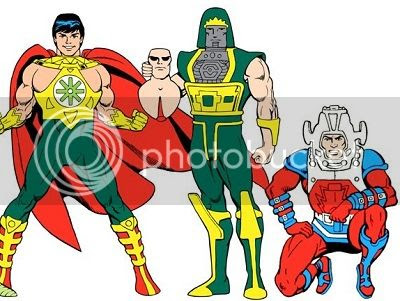 Another cultural diversity animation creation was El Dorado, arriving in 1981 on an episode of Super Friends. He was proposed for inclusion in the Super Powers Collection, but joined Samurai in that 2011 DC Universe Classics eighteen wave instead. With his powers of super-strength, teleportation, telepathy, and illusion casting nearly duplicated by Bloodwynd, I'm still trying to convince the internet that El Dorado was just another alternate identity of the Sleuth from Outer Space to give him a retroactive pass into the Hall of Justice.

The last two are real dogs. Cyclotron was a name lifted from old DC Comics, but as seen here was a robot created solely for the crumby 1986 wave of Super Powers figures. Arguably the least loved toy in that line, with major competition in the very off-model Orion. Ripping off the 1983 Mattel Masters of the Universe figure Man-E-Faces was more of a priority than accurately portraying the son sacrificed by Darkseid to "The Pact." I like seeing the Manhunter from Mars in this sort of company, if only because it advances my Patron Saint of Loser Super-Heroes thesis.
Posted by Diabolu Frank at 4:42 AM

I had that Orion as a kid. It was SO off-model that I thought he was supposed to be Adam Strange. And remembered it that way, until the internet.
When Bloodwynd was in the comics- I was convinced he was really Martian Manhunter, incognito for some reason... I never saw the end of his story so that was another thing I never knew about until the internet was a thing.

Well, you were right! Sort of. I have people working on that question as we speak, twenty years of confusion later...