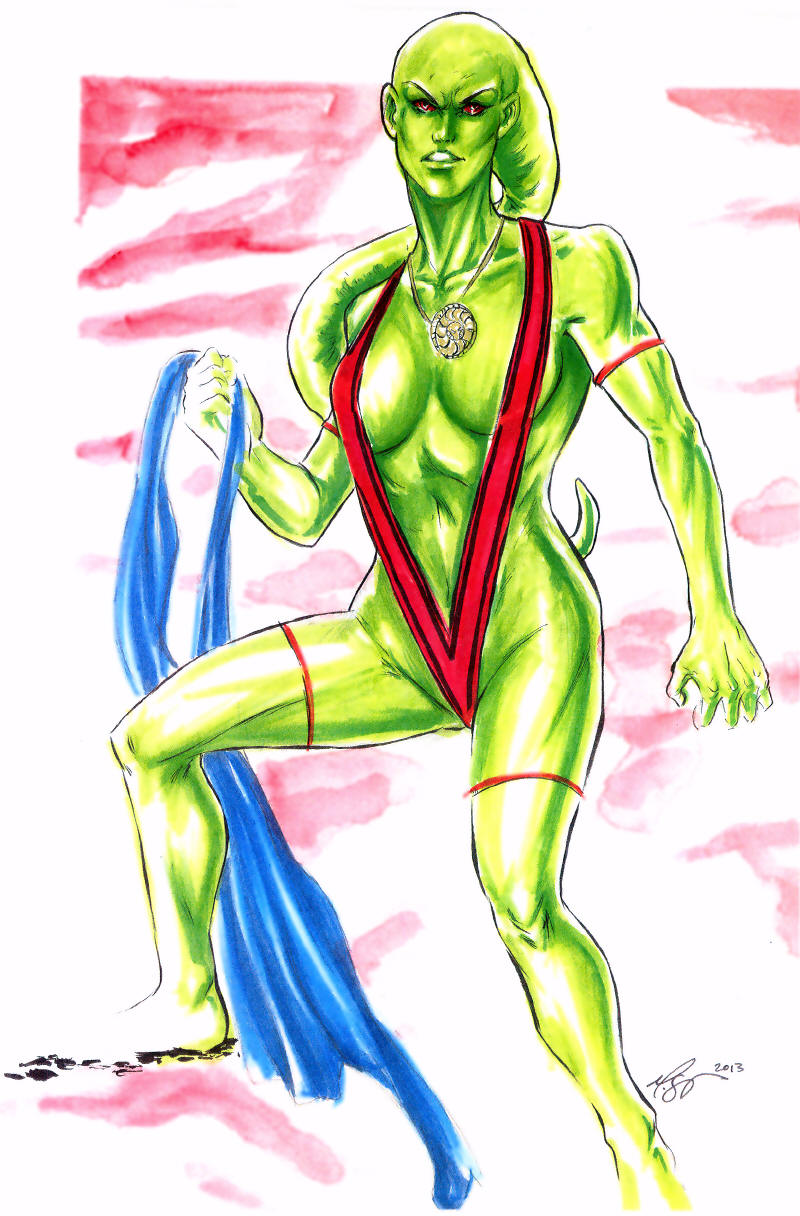 When I met up with Vo Nguyen, artist of Bette Noir and Cameron Chase at the last Comicpalooza, he told me he wanted to concentrate on fewer, better commissions in 2013. I was all in favor of that, so long as I got one, so I dropped a c-note for Cay'an. I've developed a weird affection for the absurd not-so-mastermind, and after never getting around to asking Joe Eisma or David Marquez to do her, wanted somebody to add to the collection started with Jonathan Thibodaux. Vo intended to "really blow it out," and this ended up becoming the physically largest piece I own at 13" x 16". I can't actually find anyplace where I can scan the whole thing, so what you see above is about a fifth shy of complete. I had to buy an oversized portfolio to display it, and it allows a roomy home for other high end 11" x 17" commissions I want to keep polybagged without cramming them into spaces. This rendition is peachy, and we even get a display of Cay'an's power of invisibility!
Posted by Diabolu Frank at 12:00 AM

Affection for Cay'an? What..no...turn away from the dark side...turn away....! (Kidding, kidding.) I honestly only barely remember her. All I remember is that she was somehow associated with OYL Martian Manhunter.

Is it maybe that, compared to D'kay, she seems like a better character?

She was behind "The Others Among Us," which means that no matter how big D'Kay's body count, we'll always know Cay'an was far more insane.

I like Cay'an mostly because Al Barrionuevo drew her so well, especially her face/eyes. She had a soulfulness to her that makes me want to know how she got to the place where she ended up. D'Kay was more obviously a one note construct for what amounted to another throwaway retcon.

I don't know...why are all Martian women insane or evil, though? Something about that bugs me. Or maybe I'm just reading into things too much. But I'm biased against everything in that miniseries, so I'm not the best judge. But I applaud you for your open-mindedness.

What I did like about her character design were the tribal rings she wears on her arms and legs. I'm pretty sure that's from Edgar Rice Burroughs, which is always a nice homage when it's not overdone. What I can't get past is that awkward full body thong, though. And sometimes if I squint, she looks like a Twi'lek, so that gives me mixed feelings. She is rendered very nicely by Barrionuevo, though--he's great at capturing form and drawing in three dimensions, which is hard to do.

I was going to mention J'en, but there was that whole "attempted murder" thing. I like a diverse rogues gallery, but agree that we could use a greater variety of villainous Martian female "types." I don't think Cay'an was quite nuts or objectively evil, but she certainly had a specific worldview that put very little value on life in general.

I'll admit that I considered having a female artist draw Cay'an, but decided that costume would reflect badly on me as a patron. I can see where it was going, but I can also see too many crevices where it in fact goes and wedges. If Cay'an ever comes back, something less revealing would be more respectable. And she's totally inspired by Oola-- no doubt!

My memories of that miniseries are very, very hazy at best, so I apologize. I remember Ca'yan being slightly unhinged, but I'm probably remembering wrong. The only character that really stuck out to me from that series was Till'all--and I had to go look his name up because I completely forgot it.

It's always interesting to see a female artist's perspective...maybe you can find someone to draw a few female Comrades of Mars someday.

Somehow, J'onn seems to attract dysfunctional female characters, which is quite interesting. Even Miss Martian has her issues. Maybe it's his roots in the noirish 50's? Or are Martian women just not to be trusted?

Really, my biggest issue with Cay'an is her name. The first time I saw it, I read it as "Cayenne" in my mind, and forever will she be associated with the pepper. You'd think it wouldn't bother me considering that our hero's name is a pun on "John Jones" but it just does. It's probably supposed to be pronounced as "Cay-ann" or "Cay-ahn," but, darnit, I can't unsee "Cayenne."

Convention artists are disproportionately male and female artists are disproportionately manga-centric (not really my bag) but I've got two solid cases to make for my Kameradin of Mars commission gender equality initiative. Lane Montoya did Gypsy and Princess Cha'rissa, while Jamie Kinosian did two duos, M'yri'ah & K'hymm and Perkins Preston and Patty Marie. Typically though, I start with choosing an artist I like and then select a subject that seems best suited to their style. I'll probably run another 2013 commission this week, by a female artist who is really good at drawing pretty gay boys, so I gave her a pretty gay boy to draw.