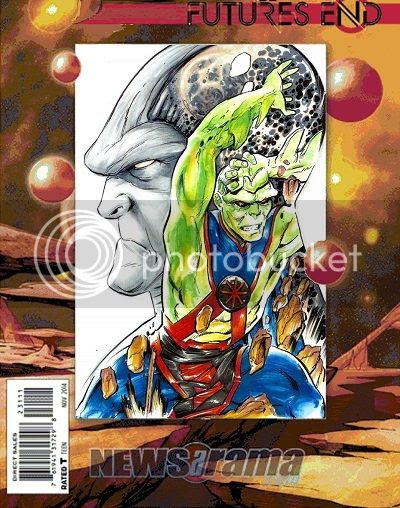 
"Over the past three years, DC Comics has established September as a very important month at the publisher -- and as revealed on Newsarama, they're looking to keep that momentum going with each of their mainline titles set to flash-forward five years into the potential future, along with the return of "Villains Month"-style lenticular covers. The issues will tie-in to DC's upcoming weekly series "The New 52: Futures End," which debuts in May..."

Because of the delays and allocations that came with last year's gimmick covers, DC is advance soliciting these September shipping books to better establish demand for setting their print runs. No creative team information or cover images are currently available.

The mystery of the Martian Manhunter is revealed at last as his decades-long plan for world domination comes to fruition! Continues in this month’s JUSTICE LEAGUE UNITED: FUTURES END #1!

I can't get excited about yet another possible future that will not ultimately come to pass, but if the past set here is in line with New 52 continuity, this reestablishes J'Onn J'Onzz as being active well before any other major DC hero. Also, it wraps a dangling plot thread from Stormwatch, and provides motive for a probable heel turn from the Alien Atlas even after Futures End resolves. At this point, I'm fine with that, because I'm bored with a dead Mars and one or two other "last survivors" at a time, plus the Manhunter gets a significant event plot of his own for once. I'm most excited to see if any of our Comrades/Menagerie members turn up.

In the concluding chapter of the epic story that began in this month’s JUSTICE LEAGUE: FUTURES END #1, the armies of Mars rise against the unsuspecting population of Earth – and only the combined might of the Justice League and the Legion of Super-Heroes can stand against them!

Again, this is an Elseworlds wrapped in a Tangent stuffed in a Tales of the Dead Earth. I'd like to think Futures End is a self-aware satire of the dreck DC's published as the New 52, going all Flashpoint again before returning to the old continuity. I'm confident that gives DC far too much credit, and even if that were the intention, we'd still have the same worn out talent and crumby editorial machine in place that had already ground out most of my enthusiasm for DC for a decade prior. So by all means, give us an evil Martian Manhunter, his army of invaders, and a clean break for me to stop concerning myself with anything DC publishes until they decide to stop acting like Heroes World Marvel of the late '90s. And thank you for containing this story in just the two issues. These, I can maybe buy.

So many questions hang over this nascent team. Will Hawkman sacrifice himself to save Rann, one of Thanagar’s enemies? Will Alanna and Adam ever be reunited? Can Miiyahbin face her fears and become the hero she’s meant to be? And the answer to all of this spells death for one of them. This issue is also offered as a combo pack edition with a redemption code for a digital download of this issue.

I'm going to go out on a limb and say they kill Adam Strange so Alanna can't ever marry him (Didio forbid!) but can take his place (which was already alluded to when the book was in the planning stages.) Say, why does Supergirl have to get Byth's tongue? Also, Animal Man's costume makes him look as most like a dolphin/whale, but I really don't see any "animal" in there. He's more like "Bob Sled: The Sleigher."

As Lord Superman stands on the edge of triumph against a physically and emotionally exhausted Justice League, Terry McGinnis returns from the Justice Lords’ world armed with a secret weapon! Don’t miss the stunning conclusion of “Justice Lords Beyond.”

So is Lord Manhunter in this, or what?

As the smoke clears from TRINITY WAR, one thing looks disturbingly clear: The members of the Justice League of America are dead, betrayed by one of their own. But all is not what it seems. Martian Manhunter and Star Girl live to fight another day, only to find themselves trapped on an alien world under the control of a group of Super-Villains. The key to their survival may lie in the hands of Despero! Don’t miss these stories from issues #8-14!

I've still only thumbed through most of these. They look very inconsequential. I'm sure Martian Manhunter appears in some other trades this month, but they all look crap, and DC doesn't deserve the press. 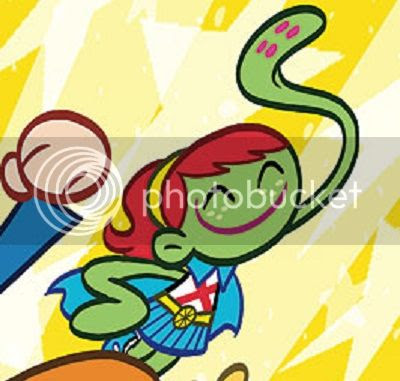 The Tiny Titans journey to the Fortress of Solitude, where they meet up with the Man of Steel! Can he help them get their treehouse back? Only if he’s not super-busy!

Posted by Diabolu Frank at 6:27 AM

I do like the fact that J'Onn is shown as having been active on Earth for decades. However, after reading this blog for years -- and recently rereading the posts from when J'Onn died in the old continuity -- I believe that the DC editors and writers truly do not understand J'Onn. He is more of a hero -- even in this current continuity -- than many bigger names. He always acted in the interests of humanity. (Perhaps J'Onn in the stories believes that his actions will help humanity.)

I do not want to see a face-heel turn after the alternate story is done. It would be interesting if he seems to do so, and dumbfounds both the villains and the "stupor heroes." It might surprise the readers and force the heroes to confront their own prejudices, as it seems only aliens who look very human or are cute/sexy are welcome now as heroes.

When J'Onn was shown beating up the Justice League, I enjoyed it as the characters seemed lifeless, cowardly and stupid. I regret that it was not an image of J'Onn beating up the DC editorial staff and writers for gross mismanagement and poor characterization. Perhaps I am reaching the point of apathy with DC, but there is still anger and disappointment.

This is baseball season, and if J;Onn was a ball player, he would want to be traded to another team. Perhaps this is the problem I have with the current DCnU. I have tried to give them chances to prove themselves, but I am often disappointed. (By the way, I thought that the Legion of Superheroes was supposed to now be from the future of Earth 2? Oh well, so much for sticking with the new continuity.)

Perhaps if the DCnU fails, there will be new leadership that can do a hard reboot to get rid of a lot of stuff that has not worked out for many readers. Perhaps the best thing that can happen for J'Onn is for him to disappear for a while and come back when the DC Universe is guided by people who know characters, like those characters and can write somewhere beyond the level of a middle school student. Or perhaps I just slandered middle school students?

Frank, I commented on the CBR thread with this response -- http://forums.comicbookresources.com/showthread.php?494151-DC-Releases-September-quot-Futures-End-quot-Event-Month-Solciitations&p=18410588&viewfull=1#post18410588

Am I being too harsh? I hope that I did not offend people on the boards there, but this event seems to almost make the HP Lovecraft Mythos to be chipper. At least THAT setting is meant to be hopelessly dark.

I've moved past the point of caring, and you know, it's kind of liberating. I'm done worrying about continuity, because there's no way I can keep the current/potential/alternate/whatever continuity straight anymore. I can't even summon the strength to be angry at them. Trying to be a fan of DC is like being trapped in an abusive relationship. I just can't take it anymore.

DC does not get J'onn, and now I'm guessing they just don't get the concept of character, period. It's all just noise at this point, with neither logic nor feeling nor depth. The last time I felt anything from reading a comic was when that dog died in a Booster Gold comic a few years ago--that made me tear up. Watching the world get destroyed by an army of Martians? Meh.

will, I've been hoping for that new leadership for a long time. I'm not sure it's coming, though. You'd think they'd stop with the lenticular 3D collector's limited edition covers by now...I mean, it's 2014...

Great comments, Will! I believe I was where you're at now, but having abandoned serious expectations of DC, I mostly take this stuff in stride. If I bother to buy something by DC, and it doesn't embarrass or offend, that's a participation award for the current regime. My DC left the building with Kahn and Levitz, and until the current lot see their way out, I have no cause to expect better.

As for your comment on CBR-- that's the Marvel vs. DC movie debate in a nutshell.

After the Image exodus in the early '90s, Marvel pushed some new talent, but mostly made their universe the star. However, fearing irrelevancy and changing tastes, they emulated Image's spikes and chains and zippers-- trying to make all their heroes !!!EXTREMELY KEWL!!! The poster boy for this triumph of clueless "style" over basic competence was Thor in a crop top with Godiva hair. It took a hard turn toward traditionalism in the comics (like Busiek & Perez's Avengers) and Marvel Studios need to build on characters not already consigned indefinitely to other movie companies to remind Marvel of who their characters were and how to make them work for general audiences.

Meanwhile, DC was not only perpetually #2 by the '90s, but were constantly threatened with slipping even further down the food chain by Image, Valiant and others. Absent many sellable name characters beyond Superman and Batman, nor A-list talent, DC quietly rebuilt their Post-Crisis universe in the model of Silver/Bronze Age Marvel with lesser known but quality materials. However, their big hits with broader audiences always veered toward the dark and intense, with lots of death and "mature" trappings, which overshadowed their less heralded accomplishment in universe building.

DC owned super-hero media for a long time, and still like to think they do. However, somewhere along the way, they and Warner Brothers decided that every property had to be like Burton/Nolan Batman to work, and line tries to become everything books like Watchmen and Dark Knight Returns were criticizing. Marvel Studios has a wide variety of characters appearing in movies that are not only tonally different from each other, but even allow major shifts within a franchise (Captain America.) They're successful because they're true to their concepts and varied in their approaches, appealing to a broader spectrum of tastes.

I'm not currently reading much Marvel or DC, favoring Image, Dark Horse and Boom. But in movies, DC/Warner hasn't figured out how to do Superman since 1981, and can't get anything besides Batman to work. Rather than recognize their errors and course correct, DC has embraced the blindness of the WB. I may take but mostly leave their comics, but as a media brand and especially at the cinema, I'll make mine Marvel, thanks.

Liss, as noted, I'm mostly right there with you. The blog hasn't taken a turn toward Silver Age coverage without reason. Notices on Justice League United have been quite good though, if you're up for exceptions that prove the rule.