The Weird War of Gilgana: Iwangis IS The Creature King! 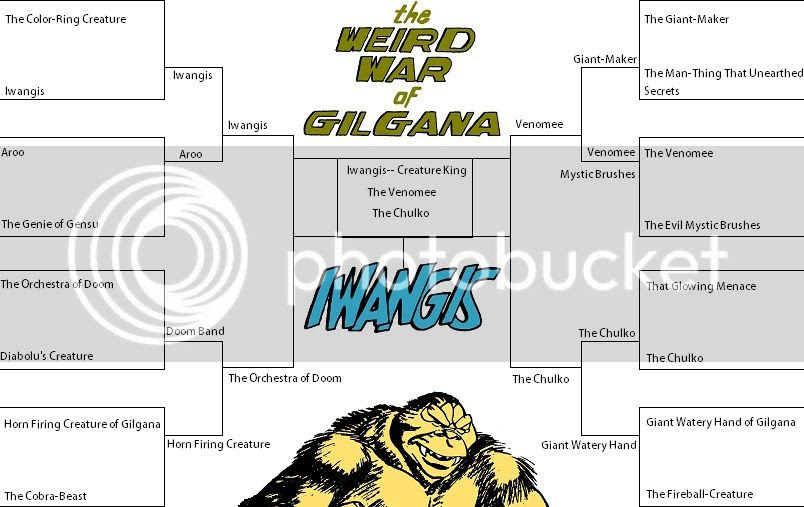 The clash was tense, and initially appeared to turn against the Chulko that had already stalemated against the Venomee, who themselves found loggerheads with the Creature King. Unseen but always felt in these proceedings, the wizard cursed the prospect of using his magic to arbitrarily decide a victor, or else wearying his menagerie by drawing out the conflict still further. Briefly, surprisingly, the Doom Shadow fell in such a way that it seemed the battle might favor it. Ultimately though, the energy blasts of the Purple People striking Iwangis triggered a series of explosions that launched a rockslide. Pink sand was pushed off the beach into the waters of Gilgana, causing a far greater explosion, into which the Chulko succumbed. The additional statues that slid to shore expanded the Creature King's army, which finally overwhelmed the Venomee.

The creature commandos of Iwangis may have overcome, but as he looked out over the desolation wrought, he recognized that he would be the king of nothing in this realm but dirt, rocks, and calamitously unstable water. Could Iwangis even dare sleep this night without fear of a native watery hand drowning him, or a monster goring him? Iwangis' goldenrod paw allowed pink sands to pass through his massive fingers, and contemplated an alternative that may have been influenced by sorcerous suggestion. From a slightly safer distance as allowed for the Creature King to continue controlling his minions, Iwangis directed them to sacrifice themselves pushing a mound of meteoric sand into unstable sea, insuring a catastrophic detonation that tore a small gap in the already threadbare reality connecting Gilgana to Earth. From a hole in the sky, the monsters once collected by Diabolu in ancient times rained down to the ocean surrounding a precarious, remote isle... 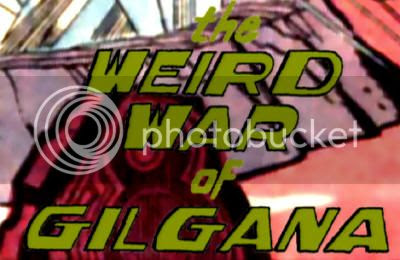 Despero had done much with his reign as champion over the vile villains of the Martian Manhunter. After outlawing interpersonal conflict among the gathered rogues, he initiated a purity test derisively referred to as SurVILEvor Island. As it turned out, the location was actually Diablo Island, a home to the true evil of Eclipso, who launched ongoing eviction proceedings enforced by the Legions of Doom. These distractions had allowed Ma'alefa'ak to instigate rounds of torture against his brother's friends and allies, but with blood and a bestiary in the water, Malefic saw an opportunity to reclaim his title as original victor over the Vile Menagerie. With The Interferer finally displaced, this supposed "Isle of Diabolu" was up for grabs...

Posted by Diabolu Frank at 5:58 AM

Of course he wins! He has the best name ever...
Awwww, but now I'm sad. Nice Rock-Biter-moment!

One of these years, I will pick a winner!

I forgot-- who were you rooting for as champion? My top two picks made the final three.

I was rooting for the brushes (funny, I just opened my Showcase Presents a few days ago, and I had a bookmark in the story about the Evil Mystic Brushes. That bookmark must've been there for four years.)

After that round was over, I voted for the Chulko to make it to the finals, but, alas.

I didn't much like "The Supernatural Masterpieces," but you'll be pleased to know that I've already selected a very fine artist to handle an Evil Mystic Brushes commission.

I'm not into the Chulko. It got worryingly far for my taste.