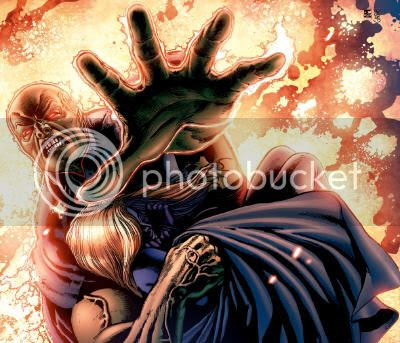 In mid-October of last year, a Comic Book Resources message board user called Movieartman asked his fellows which artist, exempting DC fan favorite Ivan Reis, they would like to see draw a Martian Manhunter ongoing series. Twenty-six users voted on the poll he set up, with no votes going to Eddy Barrows, Dale Eaglesham, Jason Fabok, Guillem March, Rafa Sandoval, Paulo Siqueira, or David Yardin. Personally, I'd be quite happy with most any of those guys. Interestingly, a separate poll for Guillem March's next project saw the Manhunter from Mars in a three-way tie for second place. At single votes each were David Finch and Miguel Sepulveda, who have each worked on ongoing series featuring the Alien Atlas in the New 52. At two votes each were Jae Lee, Phillip Tan and Ethan Van Sciver, which I figure to be pipe dreams anyway. Francis Portela pulled in an extra vote over them. Far and away the favorite at nine votes was Doug Mahnke, who drew the single most popular issue of the only ever Martian Manhunter ongoing series, and drew him extensively during his run on JLA and beyond. While I enjoyed the fill-in artists, I was a bit miffed that we didn't get Mahnke for much of the Manhunter/Stargirl story arc in Justice League of America, as we were initially promised. Write-ins included Fernando Pasarin, Alberto Ponticelli, Darwyn Cooke, Tom Mandrake, and Cliff Chiang. Brett Booth and Scott McDaniel got one yay and one emphatic no each, sort of canceling each other out. Patrick Gleason and Francis Manapul came up several times.
Posted by Diabolu Frank at 6:51 AM

My dream artist for a Martian Manhunter series isn't at DC right now: Francesco Francavilla. After him, I'd go with a write-in like Darwyn Cooke or Cliff Chiang, and then guys from the poll like Ethan Van Sciver and Jae Lee.

But now that I think about it... While I'm not overly excited about John Romita, Jr. taking over Superman, I think JRJR could do a really terrific job on a Martian Manhunter tale.

I enjoy Francavilla's spot illustrations, but have only ever followed his sequentials on Afterlife with Archie, which leave enough to be desired that they're one of the reasons I won't continue past the first arc. That school suits John Jones though, and I'd offer Nick Dragotta as a strong replacement.

I've also grown to disdain the stylings of Jae Lee, but would back the rest of your picks, unlikely as they may be to ever bother with such a project.

John Romita Junior was one of my favorite artists before he started letting Klaus Janson ink everything he did and then they formed a quality suicide pact that sees both artists deteriorate further with each successive project. Even still, JRJR would be a lot more palatable on the Manhunter from Mars than Superman. In fact, Superman would be near the top of my list of characters JRJR simply should not draw.