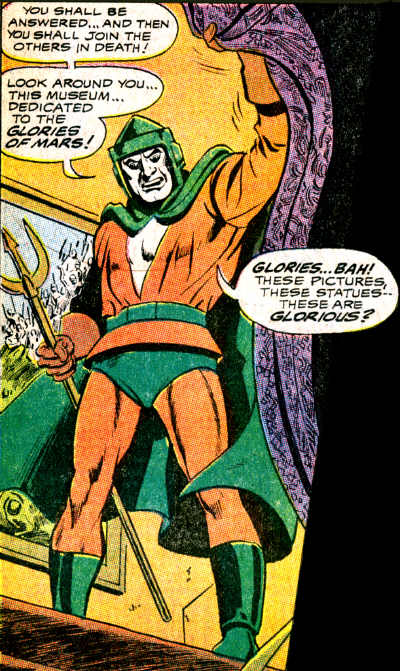 History:
Commander Blanx led white-skinned Pole Dweller forces in an invasion of green-skinned Desert Dweller territory as part of a world-wide civil war in pursuit of the Blue Flame of Mars. His chief rival was Military-Science leader J'onn J'onzz, whom he met in hand-to-hand combat before the Flame. Blanx had one of his men strike J'onzz from behind during their engagement, and took the Desert Dweller into cutody. J'onn J'onzz was too popular a figure to execute, and was instead sentenced to thirteen years in exile by a court presided over by Blanx.

During his first year under the sentence, J'onzz was accidentally whisked away from Mars by a teleport beam to Earth circa 1955. For the next few years, Jones attempted to return home by the same means, sending a probe-ray that was detected by Commander Blanx. In 1959, Blanx first tested the probe by sending a cache of Martian weapons to Earth, then travelled there himself with an away party. Blanx had intended to murder his arch-enemy, but the Manhunter caused a fiery explosion while in his human form and escaped. Commander Blanx then led his men in riots through J'onzz's adoptive home, Middletown U.S.A., to draw out the Manhunter. Blanx was briefly knocked out by the Martian Manhunter, but escaped while J'onzz was distracted by the Barry Allen Flash. 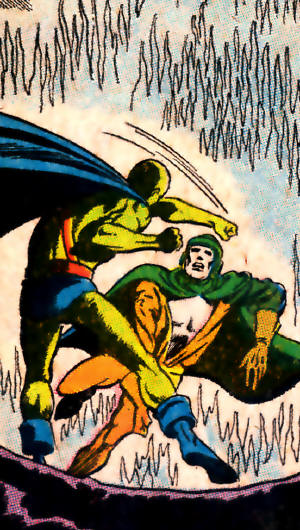 Commander Blanx and his men set a trap for J'onn J'onzz, whom they captured and bound to a rocket set for launch. Their actions were detected by an early collection of super-heroes before the rocket was ignited, and the two groups clashed. Blanx fought with Superman, who was impressed by the Martian's power. During the battle, the Manhunter was released, and he revealed to the Earthling heroes the Martian vulnerability to fire. The Pole Dwellers were swiftly defeated, and were carried by the Man of Steel back to Mars.

Commander Blanx's activities after his return to Mars are vague. Presumably, he returned to power among the dominant Pole Dwellers. At some point, representatives of a distant star-system offered to buy Mars for mineral wealth. According to their code, only the last living Martian had the right to sell. Viewing an increasingly pacifistic Mars as weak and unworthy of continued existence, Blanx loosed the Blue Flame upon the world. The planet was rendered uninhabitable to the very few surviving Martians of the devastation this wrought.

J'onn J'onzz returned to his homeworld after his term of exile, first to aid those he could, and then to see Blanx paid for his actions. With the help of the Justice League of America, the Martian Manhunter overcame Blanx's forces, then confronted the villain in singular armed combat. Over the course of their dual, Blanx fell from a considerable height and was crushed by a large globe. Whether Commander Blanx survived the encounter is unknown, but he has not been seen since. 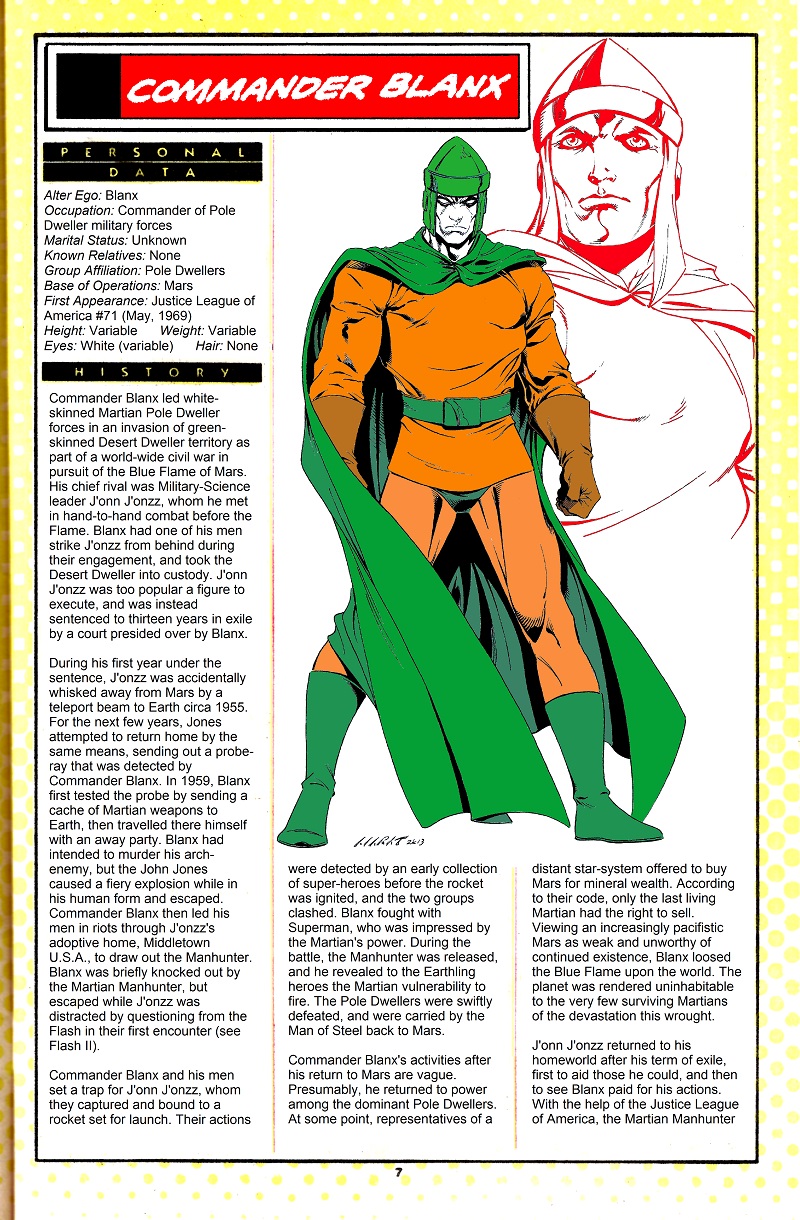 Powers: Presumably, Commander Blanx possesses all the powers and abilities of the Martian race. This includes telepathy, invisibility, intangibility, flight and "Martian Vision."

All Martians possess several powers, including superior strength and reflexes. In fact, Blanx's strength was great enough to rival Superman's by his own admission. Commander Blanx could clearly summon shape-shifting, flight, invisibility and limited invulnerability. A Pole Dweller in Blanx's company possessed super-hearing, a power he would likely share. It is unclear whether Blanx could use other powers while invisible. Blanx displayed none of the usual Martian mental skills, such as limited telepathy and telekinesis. His shape-shifting appeared limited to assuming the form of another, but this could have been due to his limited time on Earth to explore his abilities.

Weaknesses: Commander Blanx did not have any super-powers on his native Mars, and like many Martians the extent of his powers depended on his environment. While largely invulnerable on Earth, his one known weakness was fire, which would sap his strength and eventually kill him. While not as resilient against it as the Martian Manhunter, Blanx and his fellow Pole Dwellers seemed to react to its presence much better than other Martians from his time period, who tended to collapse immediately at the sight of flame.

Distinguishing Features: As a member of the Martian Pole Dwellers, Commander Blanx had pure white skin.

Weapons: Commander Blanx appeared to be enamored with and proficient in the use of any number of Martian weapons. He was most often seen with a Microwave Pistol, powerful enough to injure even near-invulnerable beings like the Martian Manhunter.

Vehicles: As commander of the Pole Dweller military, Blanx had access to a sizeable arsenal, including specialized tanks. Through his contact with representatives of a distant star-system, Blanx was also given use to several interstellar spacecraft capable of projecting red sun radiation that could immobilize the entire Justice League of America. Blanx seemed a capable pilot in the operation of these craft.

Quote: "You are a cool one, J'onn! I'll sleep better when you're gone!"

Although I ended up loving J’onn from the 90’s and 2000’s books, I have a gleeful addiction to the old pulp stuff. All the over the top characters, the plot lines that make me giggle, I just love them. In the same way I’ve always enjoyed reading the old 50’s and 60’s Batman stuff, this is just so over the top. I think that’s why I loved New Frontier so much, it seemed to blend well the delight I have in the older more “innocent” comics, and the realism of the newer stories.

My love for the Manhunter really comes from '80s JLI through Morrison/Waid "JLA." Joe Kelly dropped the ball on JLA so badly, especially with "Trial By Fire," Martian Manhunter never recovered.

On the other hand, I grew to like much of the "House of Mystery" run, though some of it was too terrible for words. Anything with Professor Arnold Hugo is golden, I love Zook, and the VULTURE stuff was fun. I also really enjoy Patrolwoman Diane Meade's appearances, which I really need to address here soon. I like the potential inherent in the '70s appearances (Blanx, Mars II, etc.) but the actual stories are pretty lousy. I haven't warmed to the '50s stuff yet, either. Still, that was the only period where J'onn J'onzz was wholly his own character, mostly independent of the League and the DC Universe.

I have mixed feelings about "New Frontier," but Cooke's take on Manhunter worked extremely well. An excellent characterization drawn from most of my favorite sources (DeMatteis, Jones, Englehart, etc.)