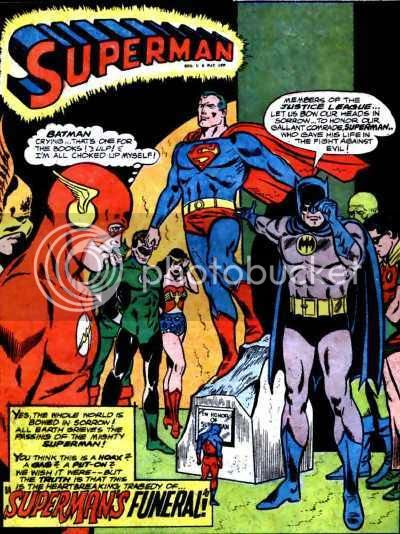 A Superman epic began in Action Comics #363, a story called "The Leper from Krypton." Continuing into the following issue's "The Untouchable of Metropolis," we learned Lex Luthor had infected the Man of Steel with Virus X-- incurable Kryptonian leprosy that could potentially spread to all mankind. For the good of the Earth, Superman had to be launched in a rocket powered "space-casket" into Flammbron, the hottest sun in the universe, to contain any potential outbreak!

Lying in a deathly state, his skin ravaged and green, Kal-El used his super-vision powers to view planets he passed on his way to cremation, many already mourning him. Even Lexor, a world that worshiped Lex Luthor, tore down statues of the villain in recognition of the magnitude of his crime. As Kal-El passed Bizarro World, its idiot residents pelted his craft with Red and White Kryptonite.

The Man of Tomorrow's life began to flash before his eyes, and he considered what might have been, had various points in his life turned out differently. In his final moments, Supergirl arrived carrying a "space bubble" with the loves of Superman's life: Lois Lane, Lori Lemaris, and Lana Lang, who all wished to say their goodbyes as the "space-bier" plunged into the sun.

Martian Manunter's role in this issue was very small, as he was barely seen crying behind Batman and Robin and the Justice League of America's memorial service. The Dark Knight asked, "Members of the Justice League... let us bow our heads in sorrow... to honor our gallant comrade, Superman... who gave his life in the fight against evil!"

I expect milking four straight issues of Action Comics in the '60s was probably as ridiculous then as the months long "Death of Superman," "Funeral For A Friend," and "Reign of the Superman" was for the rest of us in the '90s. "Superman's Funeral!" was by Leo Dorfman, Ross Andru, and Mike Esposito.