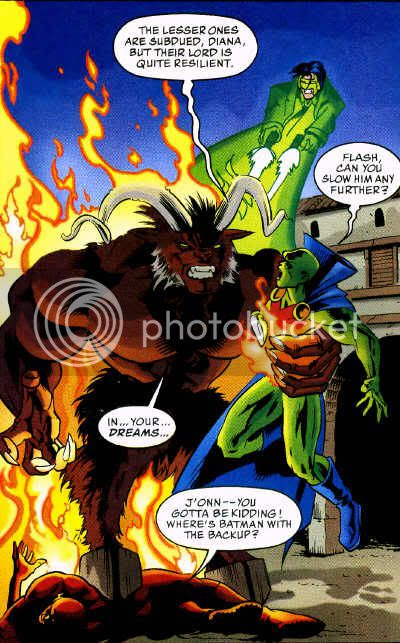 Dr. Occult mystically extracted the homunculus/bullet from Superman's body an took it into his own.

Martian Manhunter: "This is what we've been able to deduce so far. The Diablos' accumulated soul-energy will be used in conjunction with the stolen Fountain of Lessing to open a permanent Hell-Gate. This so-called 'Black Baptism' is doubtless planned for today, so we haven't much time. The tangential involvement of the street mage known only as Faust, coupled with the recent disappearance of his father-- sometime JLA adversary Felix Faust-- suggests that the elder man may have been the Diablos shadow-partner all along. As you may recall, our recent encounter with Felix Faust concluded with the banishment of the mad Egyptian sorcerer he raised from the dead named Hermes Trismegistus. Trismegistus had possessed the wizard, and was obsessed with extinguishing all life on Earth. He nearly succeeded. At the time, we all assumed that the undead spirit had finally been laid to rest. Now, however, I fear that the lich has reasserted dominion over Felix Faust, and plans to use the unsuspecting Diablos' dark ceremony for his own nihilistic ends."

Faust: An intended pawn of Anita Soulfeeda in her betrayal of the Hellfather and the Diablos in her pursuit of personal power. The vulnerable June Moon and the threat of Scratch were her leverage.

Martian Manhunter: Joined the JLA against the Diablos at their meeting with Felix Faust/Hermes Trismegistus, targeting the Hellfather Don Asmodeus. Told Superman, "I'll keep him busy, my friend-- Just remember that [Scratch] is just as magical as the bullet that felled you."

Faust: Fought Hermes Trismegistus against his using the Fountain of Lessing to help in birthing a genocidal "vile form" through the unwilling Anita Soulfeeda. Determined that Anita was actually the soul of Enchantress he'd condemned to Hell, and reintegrated it into June Moon, creating another offshoot supernatural persona called Soulsinger. This entity would eventually heal the Sentinels of Magic, while Dr. Occult would take her under his wing.

Blue Devil: Freed by Faust, he helped Superman against Scratch.

Martian Manhunter: Once again acknowledging Wonder Woman as team leader this mission, reported the lesser demons had been subdued, "but their lord is quite resilient." Flash had already fallen beneath Don Asmodeus' hoof.

Batman: Commanded Tempest to cut off the black mana flow to the Fountain of Lessing.

Faust: Absorbed soul-force from Wonder Woman, Flash, Green Lantern and Superman to use against Hermes Trismegistus.

Blue Devil: Destroyed the Fountain of Lessing, and in a chain reaction, seemingly all the Diablos and Hermes Trismegistus.

Zatanna: Agreed to become the JLA liaison for magic users after being healed.

Bloodwynd: Back on his feet and smiling, this time incorrectly drawn with a face mask.

Faust: Hid himself and his father in a bid to nurture their relationship. "Ironically, I think I may have finally found the immortality I have dedicated my life to. The secret lies in having you to carry on the family name. So that there will be another generation of Faust. I'm proud of you, Sebastian." The junior Faust had retrieved a horn lost by Blue Devil in battle, and said, "don't call me Sebastian. Only Mom calls me that."

The Creators: For a little remembered mini-series, a good deal of consequence to minor characters took place here. This was basically the bridge to what became the Shadowpact. Not having followed that series, I wonder how many of the loose ends intentionally left untied here were ever resolved?
Posted by Diabolu Frank at 7:00 PM