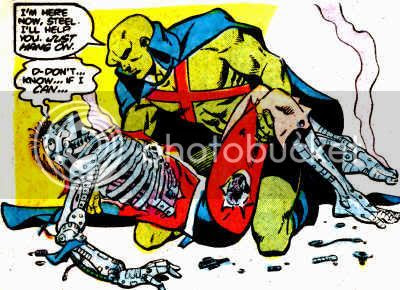 Professor Ivo: Continued to be conflicted by his own murderous actions, seeing visions of himself in a padded room.

Vixen: Rented Orson Welles' "A Touch of Evil" and tried to take Hank's mind off things with pleasant conversation. Argued with Hank that the President's ban prevented their doing anything more, but was told her she sounded like the Manhunter. "Well, with Batman out of the picture, the Manhunter is the senior member of the team, and--" Hank became more forceful, grabbing hold of Mari's arms. "Take your hands off of me, Steel-- or I swear I'll dismantle you." The pair relaxed, and Mari explained, "...when it comes down to it, Mari McCabe is as big a fraud as Hank Heywood. I'm Vixen. I'm a hunter... a fighter. But all the breast-beating and self-pity in the world won't change anything." Hank decided to become Steel, and while Mari tried to stop him at first, soon relented. In fact, unable to keep Steel in check, Mari went on the hunt for Ivo by herself, though in plain clothes.

Steel: Couldn't stand idly by at Mari's apartment with Ivo on the loose. "Dammit, Mari! A friend of ours was murdered-- and because of that idiot G. Gordon Godfrey-- our hands are tied! Where's the sense in that? Where's the justice?" Mari threatened Hank when he got grabby, and things cooled down. "Funny. You got mad-- and called me Steel, not Hank. And that's who I really am... Steel, the unstoppable cyborg. Strong enough to give Superman a run for his money. But of course I can't use my strength. The President won't let me." Hank stormed off into a bedroom, and emerged in his Steel costume. Mari thought he was out of his mind, but Steel demanded, "Away from the door, Vixen-- or I'll dismantle you."

Walking the streets of New York in broad daylight, Steel expected to attract Ivo's attention. That and more, as Steel was dismayed by the fear and disrespect that greeted him from the G. Gordon Godfrey-influenced public. Police arrived and drew down on him. Steel gave a somewhat effective speech extolling the virtue of costumed heroics, until he attacked an Ivo android dressed as NYPD, dissipating good will in favor of panic. Steel hauled the manipulative automaton to a discrete alley to extract information, but received only head games and energy blasts. Steel valiantly pressed the Ivo into reaching critical mass with its energy projection, absorbing the resultant explosion with his own body to protect bystanders. Steel was severely damaged when found by the Martian Manhunter, in terrific pain, and barely conscious. "Got to go b-b-back... to... De... Detroit... Got... t-t-to go... home..." Hank Heywood Sr. cried as he found his grandson too badly damaged to function on his own, and eventually turned off his life support.

Martian Manhunter: Was attacked by the Ivo he found at Gypsy's house. "I don't want to fight you, android... There is no reason for this! 'Though your creator, Professor Ivo, sent you to slay Gypsy-- you spared her life! You have proven that you can transcend your programming-- and think independently!" The Ivo argued that Gypsy was harmless, while Manhunter was among those responsible for turning Ivo into "a reptillian grotesquerie!" Manhunter tried to explore the Ivo's mind to determine its master's location, but was hobbled by its lunacy. Out of gratitude for its sparing Gypsy, Manhunter tried reason one final time, and the Ivo tried wringing his Martian neck. "It... won't be that easy... machine... You won't do to me... what your "brother" did to-- VIBE!" Having boxed its head off, the Ivo still claimed Manhunter was responsible for Paco's death. Manhunter angrily pounded at the dismembered android, demanding it "SHUT UP!!"

Manhunter disallowed Gypsy from rejoining the former League members, requesting, "Please Gypsy... no tearful farewells. It's not the Martian way." Still, he turned back toward the girl and received her affectionate goodbye.

On finding what was left of Steel, among police offers who couldn't figure out what to do with him, Manhunter proclaimed, "You-- do-- nothing!" Manhunter knelt down to cradle the agonized Steel in his arms, intent on carrying him home to Commander Steel. The police thought otherwise. "And are you going to stop me? No-- I didn't think so." Manhunter tried to comfort Hank Sr., but learned there was nothing that could be done as the plug was pulled on Hank Heywood Jr. J'Onn, head in hand, despaired for the loss.

Gypsy: Looked on as Manhunter tore the Ivo that had befriended her to pieces, learning from taunts that Vibe had been killed. Intended to pursue Ivo with the Justice League, but was flat refused. Manhunter believed that the law was right, that the situation was too dangerous for her, and that she needed to focus on her family. "You've been away from them for too many months, away from the normal life you deserve... I know that you're all strong... that you love each other... and that, together-- you'll find a way to heal your wounds." Gypsy cried and hugged J'Onn goodbye.

The Creators: J.M. DeMatteis gave Steel a stronger and more character-specific send-off than Vibe. There are more precious moments between characters here than I'd be inclined to detail further, but am happy to applaud. Luke McDonnell continued to be passed round robin amongst inkers, this one being Steve Montano. The results were average, aside for a lovely page with a prowling Vixen.