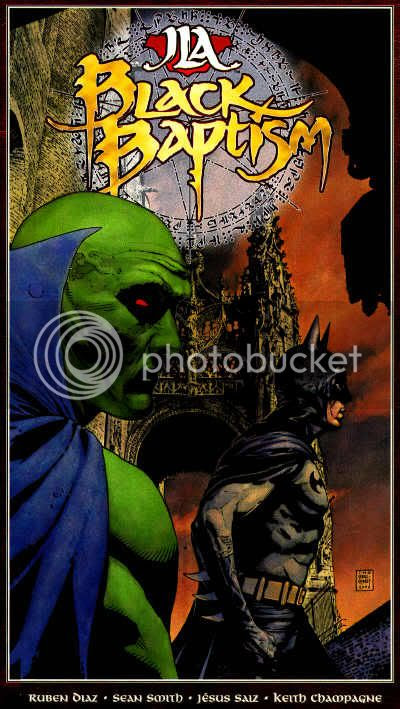 Batman, Flash and Wonder Woman encountered human sacrifice in Metropolis. Flash and Green Lantern put out a fire at the Infernal Comics Company of Jacksonville, Florida, where GL did some freelance work and the writer took a dig at Crossgen and/or Verotik.

Aquaman: Acknowledged Tempest was still recovering, and that the Fountain of Lessing was "a fountain of healing that hasn't worked in centuries. My ancestors used it to cleanse the souls of sick children.

Blue Devil: Tortured by the Diablos for information, with little forthcoming.

Martian Manhunter: Observed of the Diablos and Scratch, "They seem to operate well as a team, and in all cases, the fallen Sentinels of Magic have been alone when neutralized... When I was close enough to probe its mind, I detected no sentient thoughts. My studies of comparative mythology suggest Scratch predates every godlike being the League has encountered... This Scratch entity is the key to their success. How this Anita creature gained control over it is a mystery I am keen to solve. However, after seeing them both in action, I don't believe she is the leader of their whole operation."

Faust: Took a nap at the Detroit City Morgue with the help of his buddy Shane the mortician. Contacted his father for help. Captured alongside June Moon by Anita Soulfeeda and Scratch.

Plastic Man: Traced Rose Psychic back to the Scrap Bar, where she changed into Dr. Occult once the Diablos showed up. Wonder Woman and Green Lantern were sent to engage them. Dr. Occult returned with the JLA to the Watchtower.

Felix Faust: Revealed to still be possessed by Hermes Trismegistus and secretly backing the Diablos.

The Creators: The covers by Tim Bradstreet were one of the major selling points of this mini-series, and each was exceptional. It's a shame the story began to falter at this point, as the magnitude of the evil began to shrink rather than expand. Zatanna was ultimately the most formidable presence here, as the Diablos were too silly to take seriously, and Felix Faust long past registering as a real threat. Also, the emphasis on minor characters like the junior Faust and Blue Devil makes it feel like the JLA were shoehorned into their story, guest stars in a backdoor pilot.
Posted by Diabolu Frank at 7:00 PM