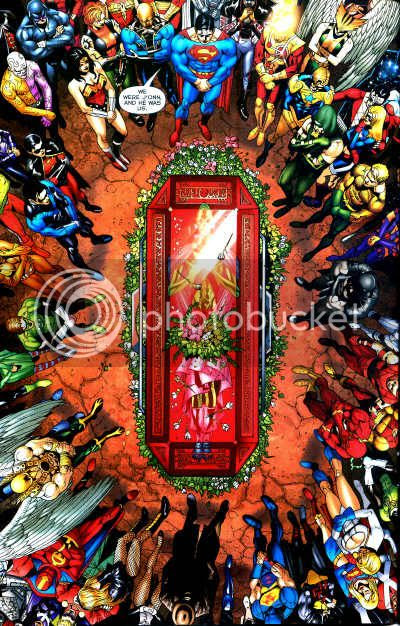 Patton Oswalt (Actor-Comedian, writing as "Marlus Randone")
The Manhunter from Mars. If Superman is Elvis, then this is Dylan. When you're a kid, you're all for the spitcurl. But by the time you hit college, you're forehead all the way. That thinker's skull, on top of a linebacker's bod... like if Socrates played for the Steelers... For every time the world's been saved in the sunshine by Superman... it's been saved in the shadows by this guy." 2

Oberon (JLI Support Staff)
"J'Onn J'Onzz is the one person on this team we don't have to worry about... he's solid as a rock!"2

J.M. DeMatteis (Author)
"As I recall, the characters I was emotionally hooked into were J'onn (this was my first time writing him and he immediately became an all-time favorite) and Gypsy (primarily because of J'onn's emotional connection to her)."3

Maxwell Lord IV(Checkmate, Businessman)
"I respect J'Onn... but... God, this is going to sound all wrong... the man's an alien! I mean he's not even a man... Sometimes, I feel that what J'Onn shows us of himself... is just a false front..."1

"...Well-- so long, J'onn. I'm really going to miss him. God, who'd've ever guessed the day would come when one of my closest friends would be a green man from Mars?"11

Ronald Wilson Reagan (Actor, 40th President of the United States)
"Green-skinned or otherwise, this man... risked his life for mine-- and I intend to thank him... I am in your debt. I won't soon forget what you did for me..."

Oliver Queen (Green Arrow)
"I've got no doubts that J'onn's soul is exactly where it should be, hugging it out with his family and friends from Mars right now. And as long as we're still here sucking air, our job is to carry the light and chase the shadows away like he would've wanted us to. He was my favorite Martian."10

Scott Porter (Actor, "Friday Night Lights," "Prom Night," "Speed Racer")
"Tim (Drake) and Martian Manhunter are two of the main reasons I even began reading DC in the first place... I love Martian Manhunter. I’m a little disappointed with the new direction, but I love him as a character."6

Paco Ramone (Vibe)
"We were never good enough for you-- were we, J'Onzz? Not like your buddies Superman and Green Lantern! Ain't that right, you green-skinned, alien son of a--

Alex Ross (Painter)
“I’ve always found Manhunter to be one of the more personally compelling DC figures because of his solitary nature. For me he embodies the distance and disconnect I felt as a teenager. Or maybe it’s the fact that I realized I too would be bald someday.”

Bruce Wayne (The Batman)
"Yes, Old Greenskin is all heart and guts..."8

Cindy Reynolds (Gypsy)
"He was like a father to me. Always there to listen... in good times and bad. Told me the truth even when I didn't want to hear it. And he never let me beat him at chess. I always had to earn it. When I did win he'd share his cookies with me."10

"J'onn J'onzz was my friend. Always there, always strong, always reliable... He was someone I could confide in. Someone who understood what it was like to lose a world and find another... We'll all miss him. And pray for a resurrection."9

"I guess there are no more words. We've all said what we wanted... needed to say on this sad and mournful day. I think it's best now to simply remember J'onn in our own private way before we leave these red sands and head back to Earth. J'onn was a friend, an ally, a brother in arms, a confidant, and a comedian with the driest delivery you could possibly imagine. J'onn knew most of us better than we know ourselves, and sometimes had no problem letting us know that fact when we strayed from true north. We were J'onn, and he was us... J'onn was the League-- embodied all that was good about it-- perhaps more than any of us. He'll live on in our hearts and minds forever."10

H'ronmeer (Martian Deity)
"Are you ready, J'Onn J'Onzz-- to leave this world of strangers? She's waiting. Will you come?"12

I love the “Elvis/Dylan comparison. Its true. J’onn is a thinkers superhero. I always said he was DC’s Shakespearian character. Its shameful they had so much trouble figuring out what to do with him, and ended up just throwing him away. I always wanted to see a Martian Manhunter story written by Neil Gaiman, there was something about J’onn that made me think he would have been treated, as he should be by Gaiman.

Comic book companies wonder why women gravitate toward the Japanese manga. Honestly, if they gave us more characters like J’onn: Soulful, thinking, mature, (and married, even if he was widowed) we might read more American books. J’onn had many qualities that I, as a woman, related to in a character and wanted to see more of. The depth of his love for his late wife and child was one of the most romantic things I have ever read, without being corny over the top type romance. It felt real. He felt real, never mind the shape shifting and the Martian DNA- he felt like a real person. Now we don’t have that anymore…and I think many of us female readers that loved him haven’t much reason to stay with DC anymore.

Yeah, a lot of creators, including high profile ladies like Gail Simone and Devin Grayson, really love the Martian Manhunter. The problem is that he has to be written correctly, which means well, and that's too much to ask. If you can't summarize a character in one short, easily marktable summation, he's of no use to DC. Too deep. Too involved.

It's also that DC has become so hostile-- toward talent, characters, and female readers; there was no place for J'Onn J'Onzz there anymore.

Marvel isn't all that much better, and it goes to show with their treatment of manga (shoddy reprints and aping surface elements) that they just don't get it, either.

I LOVE that Dylan/Elvis comparison. I'd have posted it on its own if I had to.

I agree completely. I still don’t understand why that is. I would think anything that would bring in non-traditional readers of comics would be considered an asset. I’ve long since stopped reading marvel, and I read very little DC these days (buying none, after this they will not get a penny of my money after loosing J’onn. Working for a library is a grand thing) Really, I’m down to some manga and Hellboy about now.

Not to say that manga doesn’t have its own stereotypes and problems, but the diversity of titles at least makes it sure I have SOMETHING I can enjoy, relate to, and that will make me think.

I think it's as simple as publisher Dan Didio being an insular fan trying to sell to the same thinning fellow fans who've driven direct sales for decades. Marvel has many faults, but their outreach has really outpaced DC in recent years. Vertigo isn't the draw it used to be, and CMX is just another outlet for foreign reprints. God only knows what Wildstorm is supposed to be anymore.

My taste in manga is pretty limited (Rumiko Takahashi, Ryoichi Ikegami,) but I've been shifting my support to independent publishers. I'm buying more Image, Fantagraphics, and miscellaneous others as interesting items rear their head. I like the aesthetic of American comics, but the continuity incest and other debauchery has gotten too thick for me. If I want dark material, and I often do, I'll seek that out. I expect something different from my super-heroes. Kindness. Altruism. Humor. Wisdom. Like, y'know, heroes.