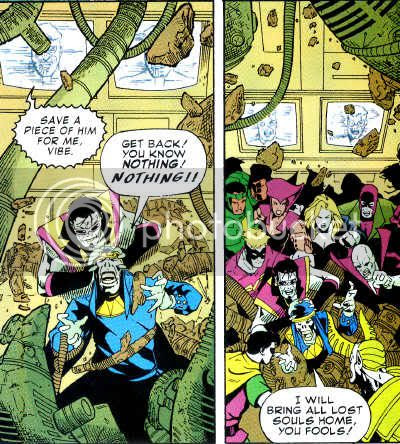 For most of the 1990s, DC Comics linked their annuals into "crossover events" of increasingly predictable poor quality and general lack of impact on continuity. By 1998, only eight were released, one for each founding member of the popular new "JLA." The existence of a Martian Manhunter annual as a result of "Ghosts" was about the only noteworthy occurrence over the nearly 400 pages produced. The individual annuals were self-contained stories based more around a theme, making "Ghosts" a hybrid of the years where a concept trumped an interconnected event. The cause and culmination of this supernatural phenomenon were alluded to in the group annual.

Felix Faust, recognizing his lifetime of magical transgressions had doomed him to inevitable torment in Hell, sought the secret of immortality from the likes of Vandal Savage. The key was a centuries-lost Emerald Tablet, so Faust opted to resurrect its last known possessor, ancient Egyptian alchemist Hermes Trismegistus. However, the fellow had gone to considerable pains to end his own life, and took such great exception to Felix's disturbance, he decided to insure his peace by killing everyone on Earth.

J'Onn J'Onzz was the first to be warned of this impending genocide, when Felix spoke to the Martian Manhunter through characters in an old detective movie he had been watching. At the Watchtower, J'Onzz explained to his teammates, "According to Faust, I was contacted first because I was most sensitive to his telepathic distress call... but after hearing him out, I thought it was best for the rest of you to hear his story... He's genuinely terrified. Mind probes confirm it." Faust explained that the Emerald Tablet was a talisman through which Hermes could "actually remove the Life Frequency from our universe." Superman mistook this for the Anti-Life Equation, while Faust continued, "Surely you've noticed the weakening of borders between worlds... Your meta-human energies are like beacons to the other side. You'd be the first to see them... ghosts." Everyone had, including J'Onn J'Onzz, with his departed wife and daughter. Felix Faust charged the League with finding the Emerald Tablet, which had been divided into three parts and hidden around the world by Freemasons, so that he could destroy it.

Martian Manhunter assumed a clear leadership role. "I am convinced this threat is genuine. I will stay here and look after our guest. I suggest the rest of you split up into three teams. Flash... Aquaman... you start in France...

Aquaman: Explored the Pierre-St. Martin Cavern with Wally. Found their piece of the tablet underwater. Surprised by unexpected visitor upon emerging from the depths. "Vibe--? But-- I thought you were dead--!"

Vibe: Startled the Flash when he appeared from out of the darkness of the cavern, accompanied by music. "You not the right one, man... What's happenin'? Where's Aquaman, Holmes?"

Ice: Appeared at the China-Nepal border after Green Lantern Kyle Rayner and Superman recovered their piece of the tablet. "What am I doing here? Is Overmaster defeated?"

Batman: Used a Waynetech prototype sub to reach the bottom of the Marianas Trench with Wonder Woman. Nearly drowned when the vehicle proved unable to withstand the pressures of the deep.

Steel: Took cybernetic control of Batman's craft, sealing it and commanding a crane to capture the final third of the tablet. "It's all right, Batman... I'm here... It's under control."

Martian Manhunter: "For the benefit of our younger members, the face you see on the video screen behind us belongs to a man named Henry Heywood. He was the cyborg Justice Leaguer named Steel. He was killed by Starro the Conqueror* a few years ago. We can't find the source of the signal to these screens..."

Aquaman: Noted that the music everyone could still hear was provided by Vibe.

Vibe: Though unidentified, I'm confident it was the "Beat Street" soundtrack, as projected from a Sanyo MX series jambox. Wikki-wikki-wogga.

Martian Manhunter: "We all know Tora-- Ice. Her death at the hands of the Overmaster touched us all... It seems impossible to communicate with them, even telepathically. I'm not entirely convinced they're really there. I think these manifestations of dead Justice Leaguers are more like psychic or telepathic playback... possibly from our own memories..."

Felix Faust: Had several JLAers form an elemental circle around the reconstituted Emerald Tablet. "Wonder Woman, you are made from the earth itself. Aquaman from water. Green Lantern controls the green fire... J'Onzz. Turn intangible, and you become the air. Join hands around the tablet..." Faust was revealed to be possessed by Hermes Trismegistus, allowing Felix to speak honestly while bound by the Lasso of Truth, which serving Hermes dire intentions. Flash and Superman were immediately removed from consideration by Hermes' superior sorcery.

Batman: Assumed command amidst the chaos. Directed Green Lantern to project his energies into the tablet.

Martian Manhunter: "Batman. This is J'Onn. Your plan requires a distraction." Tried to engage Hermes/Faust, but learned "J'Onzz. Intangibility is another form of energy interaction. You cannot touch this body unless I choose it to be so. Why fight me? I bring you perfect death..."

Aquaman: Telepathically lent his willpower to Green Lantern's own.

Martian Manhunter: Felt his theory about telepathic memory playback being behind the ghosts was, "One of many possible conjectures... but I do not discount the possibility of their existence. My religion and experience teaches me to expect an afterlife. It's something I know to be true. I don't dwell much upon it..."

Felix Faust: Institutionalized, maddened as he was by the perpetual screaming on Hermes Trismegistus, still trapped inside his body...

*: Steel was severely damaged by an android employed by Professor Ivo, leaving him a vegetable on life support for years. What was left of him was killed by Despero the Destroyer. Either name could be confused with Starro the Conqueror, whom Steel never encountered in a recorded adventure. I kind of hope he really was "killed" a third time by the giant alien starfish though, just because.

The Creators: Ty Templeton's story was cute, but lightweight considering the subject matter. Mark Pajarillo was one of several awful artists routinely utilized by JLA editors of the time, possibly because he was either very quick on a demanding book, or especially cheap.

Most Embarrassing Vibe Quote of the Issue: "You not the only one who knows how to move energy around, man. It's showtime!"
Posted by Diabolu Frank at 7:00 PM

I remember these annuals..I read them as back issues. I actually liked the martian manhunter one, the brief reuinion with his wife and child in the flames was very tender. Honestly, the rest of them really didn't do much for me.

I only read three: Manhunter, JLA and Wonder Woman. If I recall correctly, they invented a playmate for a tweenaged Princess Diana just to kill her off and make WW feel guilty about it. L. A. M. E.

I'm not sure when I'll run the Martian Manhunter Annual. I'm posting these for Halloween, and it didn't fit the tone of the week. I didn't like it on first reading, but I haven't revisited it since, so hopefully it will have improved with time.