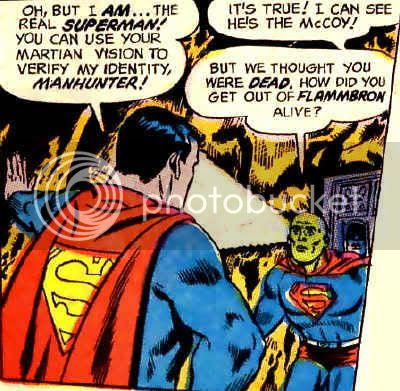 As Superman's space-casket was plunging into the hottest sun in the universe, it was viewed by beings native to the star, Flammbronians. Like most of creation, they had been alerted to the Man of Steel's imminent demise, but determined from a distance that Superman's features were returning to normal. Using their modulators, they created a thermionic sheath around the casket to protect it from Flammbron's devastating heat. Radiation transport beams were used to redirect Superman's craft to the Crystal Planetoid, where the beings of living fire followed to orient the Man of Steel. Fully conscious and having seen his restored flesh reflected in crystal, Superman determined Virus X must have been a form of plant life killed by the White Kryptonite the Bizarros pelted him with.

An overjoyed Superman flew back to Earth under his own power, only to be shocked that flags were not flying at half mast for him, and a statue being erected in his honor was left unfinished. Children's Superman costumes were being marked down for easy sale, while politicians were claiming political endorsement from Superman he'd never given. Appalled, Superman was shocked to find he'd been replaced by some sort of impostor! The Man of Steel watched "himself" performing a variety of heroic acts, but quirks in "his" performance clued him in to the identity of his substitute.

Superman traced his cousin Kara Zor-El to a meeting table seating five duplicate Supermen! "It's my turn for a piece of the action, Supergirl! The party's over, boys! I know who you are! You can take off your masks now! You're all Justice League members! I figured I'd find you here at the Secret Sanctuary!" The removal of latex masks revealed the Flash, Batman, Green Lantern, the Martian Manhunter, and Aquaman. At first, his former teammates couldn't believe Superman was alive and well. "Oh, but I am... the real Superman! You can use your Martian vision to verify my identity, Manhunter!"

"It's true! I can see he's the McCoy! But we thought you were dead. How did you get out of Flammbron alive?" Superman gave his explanation, and then the Maid of Might responded in kind. She had wished to enlist a citizen of the Bottle City of Kandor to replace Superman, but had to wait until one was chosen through an election process. Meanwhile, crime had begun to run rampant on the assumption that other heroes couldn't keep up without the Man of Steel. "To bluff the underworld, the Justice Leaguers and I devised a plan..." While Batman used an anti-gravity belt, the other heroes endeavored to mimic Superman's powers as best they could to scare crime straight. It was through their individual abilities and limitations that Superman deduced their identities. For instance, "When my fourth stand-in stayed several feet away from lava, I realized he could only be the Martian Manhunter, who is weakened by fire! I should have known my Justice League buddies would go to bat for me! Thanks... all of you! You boys can relax now! I'll handle my jobs from here on in!"

Flash noted, "As understudies, we weren't bad! But let's face it... there's only one Superman!"

After dragging this Superman leprosy story out to a fourth issue, you'd think there was enough story here for yet another. The Manhunter from Mars could have used the exposure, as his stint in House of Mystery was over, and he was no longer appearing in Justice League of America. In fact, he probably only rated inclusion here because of his powers resembling Superman's more than active Leaguers like Hawkman and the Atom. So basically, he was only useful for his lack of originality, then cast aside for a year.

"The Substitute Superman!" was by Leo Dorfman, Ross Andru, and Mike Esposito.
Posted by Diabolu Frank at 7:00 PM