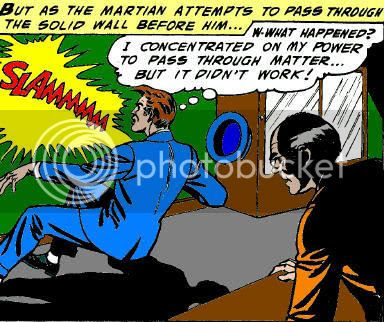 The issue opened with a multi-panel review of the Martian Manhunter's origin, mission statement, and super powers. "So... Earthlings have evil beings in their world, too! Then I shall devote my time here fighting these forces, until I learn the secret of returning to my planet!" Why, that is a clear motivation, but this is a Jack Miller script. Surely there is some bit of ridiculous nonsense around here somewhere. Transforming to human--check. X-Ray Vision-- check. Martian Hearing-- check. Bullets pass through his translucent form-- heeey, I think I found the Miller Script Gremlin!

trans·lu·cent /trænsˈlusənt, trænz-/ –adjective
1. permitting light to pass through but diffusing it so that persons, objects, etc., on the opposite side are not clearly visible: Frosted window glass is translucent but not transparent.
2. easily understandable; lucid: a translucent explication.
3. clear; transparent: translucent seawater.

I think perhaps Jack meant "intangible," as when Jones passed through a solid wall like a ghost. But hey, that's probably pedantic of me. It's just that super-powers will be of importance this time out. You see, even with those amazing Martian abilities, John Jones cannot stomp the crime spree of the Farrow Gang! Worse, the chief's only got twenty-four hours to nab the crooks, or the District Attorney is going to ask for his badge! John Jones will do everything "humanly possible" to save his boss' job. "You're my best detective, John, and I know if there's a lead to be had, you'll come up with it!"

During his tense investigation, Jones' super-hearing detected Farrow Gang member Barney Bennet's voice while questioning a pawn broker. Unfortunately, Jones' ability to pass through solid matter inexplicably failed him, as he bounced gracelessly against a wall. On confronting Bennet outside, Jones took a bullet nick on the shoulder when his "translecent" form faltered. Super-Vision was unavailable to read Bennet's license plate number as he sped from the scene.

"Of course... it is the year of the Blazer Comet, which travels between Earth and Mars, once every century, for a full 24 hours! It's blocking off the rays that emanate from Mars... the rays responsible for my super-powers!" If what you're saying is true, how come the super-hearing still worked, Jones was trapped in his unnatural human form, and all those 70's adventures on Mars II allowed for super-Martians? Doesn't J'onn J'onzz actually lose power when on Mars? No-- look I'm stopping this right now. That way leads to madness. In years to come, Miller will write inanities far, far worse than this. We're going to just accept this story contrivance and move on.

Using only his detective mind, John Jones learned that Bennet was stocking up on non-perishables, and that his car's tires trailed red sand, which could only have come from Rainbow Beach! The trail led to a derelict freighter, where the Farrow Gang got the drop on Jones. "What a fix! I've depended so much on my super-powers, I'm not even armed!"

Det. Jones was bound by rope to a pole inside the vessel, while the Farrow Gang escaped. Jones managed to reach a car battery, and carefully poured acid from it onto his bonds. He then called for back-up, and caught up with the crooks. The men were back at the precinct with five minutes to spare before the D.A. was to accept the chief's resignation. "Amazing, Jones! You know, the way you operate, I sometimes think you must have super-powers!" With a wink to the audience, the reply came. "Believe me, chief-- this is one case I wish I did have a super-power or two to see me through!"

"The Sleuth Without A Clue" was written by Jack Miller and drawn by Joe Certa. Garish “pop art” coloring by Frank Lee Delano, without any reference. Original colored art can be found here.
Posted by Diabolu Frank at 4:51 AM

"If what you're saying is true, how come the super-hearing still worked, Jones was trapped in his unnatural human form, and all those 70's adventures on Mars II allowed for super-Martians?"

A.I., while I didn't mind the DC Multiverse when it came to properties best left extant from the primary universe (Earth-S, comes to mind, as a Superman family and Marvel family co-existing renders one so redundant modern writers have sullied their very name through revision,) I never cared for Earth-2. Excepting characters like the Huntress, the Golden Age heroes work far better for me as an earlier time rather than a separate reality. So right off the bat, I cringe at the prospect of an Earth-2 Martian Manhunter, and without Roy Thomas around I'll have nothing to do with it in all seriousness.

That said, you're right that there was little consistency between the John Jones/J'onn J'onzz strip and Justice League of America. However, due to the appearances of Diane Meade and the Getaway King early in the JLofA run, and Mr. V of Vulture late in the Fox/Sekowsky term, I can't see a true schism between the two books' realities. In fact, the Manhunter from Mars was so poorly written in both books, but especially under Jack Miller, that you could lay claim to an army of different Martians running around calling themselves "J'onn J'onzz." Maybe it translates into Martian as "Guy Incognito?"

By extension, there were two dramatically different Martian Manhunter in the Bronze Age-- the namby-pamby weakling who embarrassed himself in JLofA and World's Finest appearances, and the violent nutcase who embarrassed himself in Adventure Comics. Even then the two versions intersect, so they're either the same schizophrenic or secretly part of a Martian Manhunter Corps.

The modern Manhunter didn't begin to solidify until midway through Gerry Conway's run on the Detroit-based League, when old powers like telepathy, the original detective John Jones identity, and his current trademark sobriety and dry wit came to the fore. From about 1986 until early in the new millennium, with variation, the character was fairly consistent. Having read as many stories as I have though, you're doomed to recognize that there's no way to reconcile all the many interpretations with as distinct a break as Earth-1, Earth-2 or New Earth. We could have read adventures of the J'onn J'onzzes of 52 worlds ever since "his" introduction in the Silver Age, an early harbinger of confusion to come...