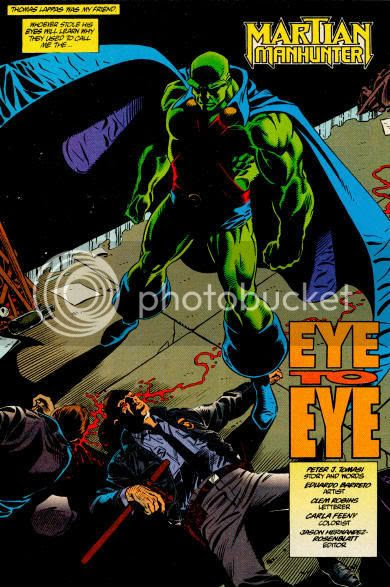 Thomas Lappas befriended poor lonely John Jones during his days on the Denver police force. Jones socialized with the Lappas family on many occasions, and even when Jones moved to New York, he still received greeting cards from them on holidays. "Opened presents and sang songs I didn't understand... Once he even got me to go skiing... Martians don't celebrate the same holidays, though." That's all well and good, but some Grinch went on a murder spree, collecting the eyeballs of cops, Lappas' included. J'Onn J'Onzz found the body of Lappas and his partner, having arrived on his old stomping ground after receiving a letter from his departed friend concerning the serial killer. Fairly ticked, Jones temporarily rejoined the force as a beat cop, beginning a one-man crusade against Denver crime. "I don't take a telepathic intrusion into someone's mind lightly," but Manhunter still took a sort of debriefing on the case from the sleeping mind of what I'll assume was the exhausted investigating officer, Sgt. Phillips. Instead of trading on that whole Super-Sleuth from Outer Space thing, J'Onzz maintained a mental link with Phillips while playing super cop about town for an indefinite period of time. 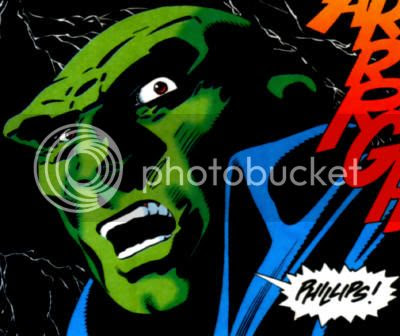 "The nights pass quickly, and still no sign of the killer. I need to rest." On his laurels, no doubt, as poor Sgt. Phillips got his peepers gouged out while the Martian Manhunter was getting his jollies playing piggy. The killer used the pre-recorded voice of a crime "victim" to lure cops into a trap, then hit them with a blinding light and beat them to death. Phillips survived, while J'Onzz gave chase, finding only his discarded eyeball. The Martian incredulously pulled a "latent image" of the killer from the disembodied orb. The no-good-nic wielded some bizarro sci-fi eyegougermabob, and dressed like Denver P.D.

Using the police computer, the Manhunter from Mars identified the perpetrator, a 200-year local legacy cop brought up on unspecified charges that cost his badge. "Only two more 'fellow' officers to go, and all the traitorous witnesses will have paid their just due for destroying the glorious blue line of the Duffy family..." He was also considering extending his rampage to jurors. Obviously a nutter, Duffy kept his confiscated ocular meat in a fish tank, within which Barreto made sure to draw all seventeen peepers in custody. Furious, J'Onn J'Onzz dunked the ex-cop in his own tank, then swore to make sure Duffy would spend his life in prison. 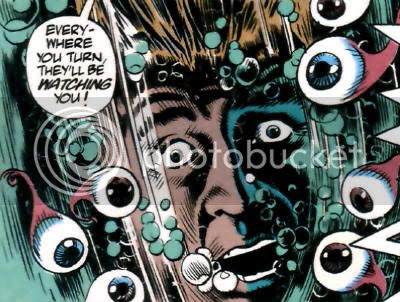 "Eye To Eye" was by Peter J. Tomasi and Eduardo Barreto. One year previous, they had teamed for a bittersweet Manhunter tale about a Titanic survivor reuniting with a lost love, in which the artist experimented with flashy "Image" techniques ill-suited to his style. In their second pairing on the character, Tomasi seemed set to restore the terrific inanity of Martian Manhunter appearances of yore melded with thoroughly modern sadism and ultra-violence. Barreto's classicist style worked similarly wretched necromancy, mingling with a weak riff off Frank Miller's "Sin City" work. Together, they made peanut butter and sardines. The story shows no evidence of research or logic. Why would a uniformed officer be assigned to investigate a dedicated case like a plainclothes detective? Why wouldn't he make the connection between the eight victims and Duffy, surely an infamous local black sheep? Why was Phillips left to his own devices while Jones played games? Speaking of devices, where did Duffy's come from, and how could he wield it with "surgical precision?" So much stupid in so little space.
Posted by Diabolu Frank at 12:00 AM