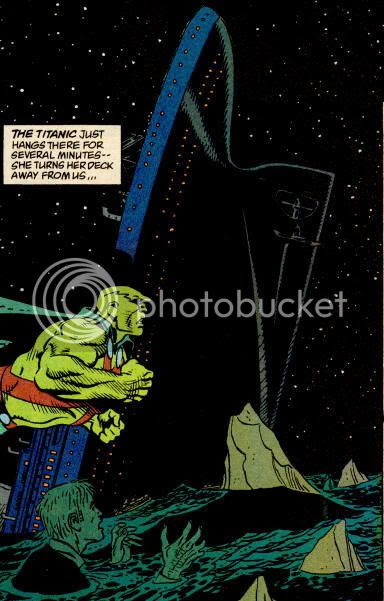 Two men in a small submersible were being chased by Navy ships near the resting place of the U.S.S. Titanic, when they ran straight into the red cross hairs of a green alien. "Even down here they find something to fight about... Where's Arthur when I need him most?" Forcing the craft back to the surface, the Navy and a businessman with salvage rights wanted to arrest the pair, but J'Onn took off with them to learn the answers to his own questions. At their launch ship, he found a withered old man watching the scene from a monitor bank. "J'Onn J'Onzz. JL Task Force. We have a situation here, sir." Harold Jean Thomas survived the sinking of that infamous ship, but did so without his beloved wife Georgia. This prompted memories of Manhunter's own loss. "Some of us never get a chance to say goodbye. I can still feel them both in my arms."

"I understand your pain all too well." With the man's permission, J'Onn telepathically probed his memories, and watched the last terrifying hours aboard the Titanic unfold. Now, before he dies, Harold wanted to see his love again. Carrying a pressure resistant camera, J'Onn explored the ship, until he found Georgia's body in her room. Too far down to return in time, J'Onn "hears" Harold turn the valve on his oxygen tank, and found his lifeless body upon emerging. Again ignoring the military's demands not to place any new objects within the Titanic, J'Onn took Harold down to rejoin his wife, leaving their hands locked in an eternal embrace as per his final wishes. "Eighty-three years... is a long wait... to be with the one you love."

"Deep Down" was a well-meaning if sometimes morbid script by Peter J. Tomasi. Sadly rushed art with some affected "Image" touches by one of the artists most closely associated with Martian Manhunter in the modern era, Eduardo Barreto.
Posted by Diabolu Frank at 12:00 AM