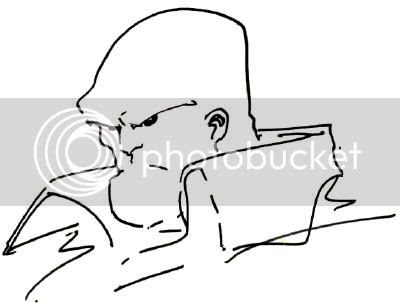 I managed to get home early today with the full intent on getting down to serious bloggy business, when a knock came upon the door. One of my best friends was all "where've you been, man? We've got to hang out." I have been absent, and I did run the streets. Good friend... lousy keeper of the Martian Manhunter fandom flame. Er, bad turn of phrase there. Hey, ...nurgh... didn't get a post at all last night, so it's not like the Idol-Head isn't still my priority.

Anyway, I'm given another opportunity to show off a sketch from the Comic Art Fans, this time by Humberto Ramos. For a brief moment, around the type of "DV8," Ramos was my favorite new artist. I loved his heavily detailed manga-centric style, which unfortunately became increasingly haphazard and free from complexity with time. However, I think I could come around again if he went to the other extreme, as he does with this sketch. One of the criteria I've heard for great, iconic heroes is the ability to recognize them in silhouette, or at least with the most impressionistic simplicity. Ramos proves J'Onn J'Onzz's potential for that status here, defined by his brow, dark eyes, and large folded collar.

I encourage artists to never allow Martian Manhunter to fall into the trap of being represented in the fashion of a style guide, as his looks are custom made to allow for maximum individual interpretation. However, I hate when artists give Manhunter a high scalloped collar, like every fifth arch-villain since Ming the Merciless. I find it terribly derivative and unimaginative. If there should be a collar, it should be as depicted here, folded and high in a manner dissimilar from anyone I can think of off-hand.

So again, kudos to Ramos for invoking all you need to "get" the Martian Manhunter in a headshot, and a mighty pretty one at that. Sometimes, less is so much more.
Posted by Diabolu Frank at 12:10 AM