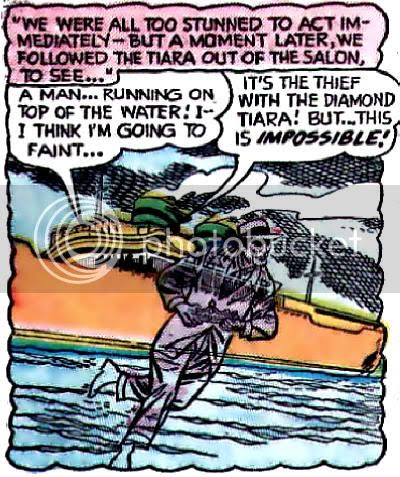 “A thief who walks through bank vaults... Stares down bullets.... Becomes invisible and runs on water! People must be suffering mass hysteria, sir!”

“It does sound incredible! What human being could possibly possess such powers? ...Powers that I brought with me from Mars... Of course, it’s impossible for this human thief to have such powers! But there must be some explanation... I’ve got it... The criminal must be a Earthling magician—A master in the art of deception! That would explain his incredible actions...”

By this point, “The Sleuth From Outer Space” had begun to stick as J’onn J’onzz’s unofficial tagline. With this logic, clearly the emphasis lie in the “outer space” portion, as it takes a real space cadet to bypass the obvious conclusion here. Don’t you hate comics where you’re so very much more smarter than stupid protagonist?

“Sir! An armored car’s been stolen in the downtown area. They say the thief is carrying it off!”

“It sounds like our magician-thief, Sergeant!” After awkwardly clearing the room, the Detective from Outer Space revealed another new Martian ability. “Through deep concentration, I can will my body to any part of the world! I want to be downtown... downtown... downtown! Things will be great when you’re downtown! Don’t wait a minute more! Downtown! Everything’s waiting for you...” 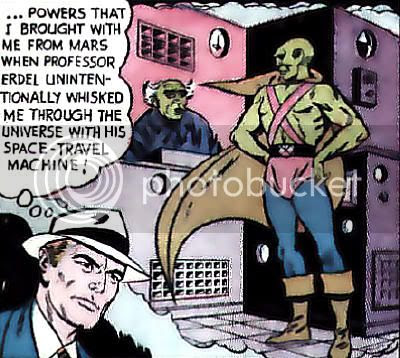 A woman shrieked as Detective John Jones appeared from nowhere. J’Onzz spied the super-thief with his incredible Martian eyesight, but missed the presumed wire holding up the massive, military grade armored car visibly touted through the streets by the crook. Now folks, at this point the only way Jack Miller could explain why Jones hasn’t figured out this was a disguised Martian was to ladle on a third new power for the species, perhaps hoping to confuse with sheer quantity what the tale lacked in the quality of horse sense. Jones heated the metal vehicle with “Atom Vision.” The thief then appeared to vanish, a power just established as Martian, though in this case a ruse. The hood from another world was actually invisible, and as “no two people sound exactly the same as they run,” Jones applied super hearing to track his quarry to a hotel room. In a puff of smoke, the criminal again vanished.

Just then, a conversation outside the door mentioned the word “fired,” which startled Jones. “We Martians are so fearful of fire that the very word shocks us!” Well, the super-crook had shrunk to about three inches, so I suppose that affected his hearing, as he squealed, “Fire... must get out of here!” This finally, finally, for the love of God finally hipped Jones to the true nature of the “magician-thief.” Shrinking himself, Jones tackled his prey, who exclaimed, “Huh? Only another Martian could have done that!” Why, let’s give the Magician-Thief a cookie, as he deduced in one panel what our hero was too dense to determine over five pages, about three after the dimmest reader. “Right... and I’ll wager you’re an escaped criminal from our planet! But... how did you get here?” 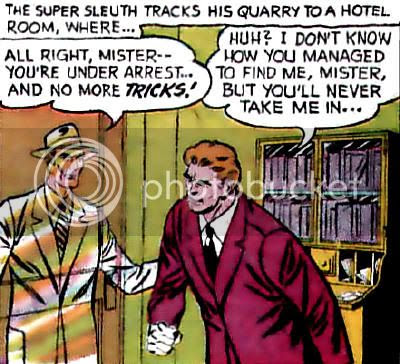 This being the last story page, it’s a blessing the five-finger Martian explained, “The ‘Guard Belt’, designed to keep me floating in space for my term, was defective—and for some strange reason, it whisked me to Earth! ...I’m an outlaw on Mars... I can’t go back!” Misty water-colored memories fill Amazing Martian’s mind “Mars... My home... Seeing my family again... The purple fields and orange plains... It would be wonderful! But if I go, this criminal will remain here and be allowed to rob and plunder Earth with his super-powers! It is my duty to remain here on Earth! Now to repair the belt with my Super-Vision...”

Okay, look, that last bit should constitute a fourth new power, but I can’t handle this story anymore. What the heck kind of power is super mechanic vision? I’m going to say John combined X-Ray vision with “Atom” heat vision, and maybe a little Martian Mind-Over-Matter as well. Thankfully, he’s a better scientist than he is a detective. I mean seriously, this is the only being with actual super powers the Manhunter had faced to date, and those powers, even the many new ones, were all possessed by Martians. Instead of spending the entire story in a state of denial, or sheer stupidity, wouldn’t we like to see some Mars-on-Mars fisticuffs? But no, the sissy thief rolled over with one tackle, and the guy wasn’t even named in the story. Throw me a bone here! “Outlaw of Mars?” “L’Aim L’Zer?” Why was the dude stealing all that stuff, anyway? Was he trying to buy a moniker? Should I title his eventual “Who’s Who” mock-up “Magician-Thief,” appropriate as it mocks the Martian Manhunter? Nuts, there’s still two panels left to synopsize... 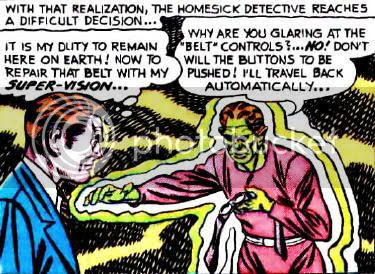 “NO! Don’t will the buttons to be pushed! I’ll travel back automatically... You fool! Now I’ll spend my life in space-prison!”
“You should have thought of that before you took up a life of crime, countryman!”

The Martian Countryman? Might go well with that John Denveresque ode Jones waxed nostalgic on earlier. Long after the evil Martian drifted off into space without any equipment outside his belt (power #5?) and Jones recovered his stolen goods, our dumb hero considered, “By now, the Martian criminal is back at space prison, serving out his time! Justice has been done... I made the right decision!”

"The Thief Who Had Super Powers!" was poorly written by Jack Miller and nicely drawn by Joe Certa.
Posted by Diabolu Frank at 12:03 AM