Sorry these are so late, but I had to have a replacement copy of my Previews catalog shipped to me...

JLA: NEW FRONTIER T-SHIRT BY COOKE
With the release of the new DVD, together with the action figures, the TPB and Absolute editions, it seems only natural that shirts get added to the mediums conquered by Darwyn Cooke`s New Frontier. Featured this month are the new JLA: New Frontier and Flash: New Frontier T-Shirts. Both are based on art by Darwin and are screenprinted in full-color on a black and a deep red heavyweight 100% cotton shirts respectively. Also available are the Classic Superman Symbol and New Frontier: Flash Symbol T-Shirts. Darwyn is on fire! NOW AVAILABLE for sale in Canada and UK. M-XL $17.95 XXL $20.95 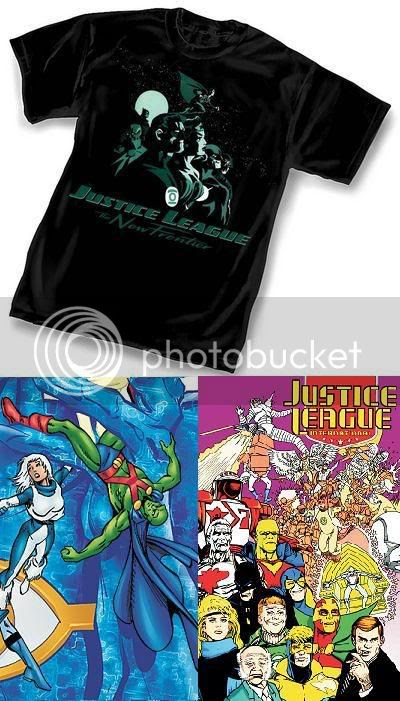 CONFIRMED EYEWITNESS TESTIMONY:
BOOSTER GOLD #9
Written by Geoff Johns & Jeff Katz
Art and cover by Dan Jurgens & Norm Rapmund
"Blue and Gold" continues as the Justice League International returns! In a desperate attempt to correct time, Booster Gold and Blue Beetle are forced to rebuild the team that defined them so long ago! But can what's left of the JLI stop Max Lord and save the world from his O.M.A.C.s?
On sale May 14 o 32 pg, FC, $2.99 US

GREEN LANTERN CORPS #24
Written by Peter J. Tomasi
Art by Patrick Gleason & Prentis Rollins
As their quest to track down Sinestro Corps rings continues, the Green Lantern Corps discover to their horror that fellow Lanterns Sodam and Arisia have been captured by Mongul and subjected to the dreaded Black Mercy, causing their deadliest fears to be dragged into the light.
On sale May 14 o 32 pg, FC, $2.99 US

VILE MENAGERIE (HUMAN FLAME):
JUSTICE LEAGUE OF AMERICA #21
Written by Dwayne McDuffie
Art and cover by Carlos Pacheco & Jesus Merine
Meet Libra and the Human Flame, two central villains in the upcoming FINAL CRISIS! Where'd the Human Flame come from, and who does he hate more than anything in the universe? As Superman, Batman and Wonder Woman assess the future of the Justice League, their days
may be numbered.
On sale May 21 o 32 pg, FC, $2.99 US

TINY TITANS #4
Written by Baltazar & Franco
Art and cover by Baltazar
Find out what happens when Robin's life goes to the birds! Meet the Little Tiny Titans as they show Wonder Girl just how tough babysitting can be! See why being Beast Boy's dentist isn't all it's cracked up to be! All this and more Tiny fun than you can shake a stick at!
On sale May 14 o 32 pg, FC, $2.25 US


DUBIOUS EVIDENCE:
DC UNIVERSE: ZERO
Written by Grant Morrison & Geoff Johns
Art by George Pérez, Tony Daniel,
J.G. Jones, Aaron Lopresti, Ivan Reis, Philip Tan and Carlos Pacheco
Cover by various
This is it! The greatest DC characters! Your favorite writers and artists! Everything leading to Final Crisis and beyond starts here for just 50¢! Take a journey through the past and present of the DCU, and witness the emergence of the greatest evil in the universe - and the stunning return of a force for good! You dare not miss DC Universe: Zero!
Retro-solicited; on sale April 30 o 32 pg, FC, $0.50 US

FINAL CRISIS #1
Written by Grant Morrison
Art and covers by J.G. Jones
Witness the historic start of the final chapter in the Crisis trilogy that could only spring from the mind of Grant Morrison - Final Crisis, featuring stunning art by J.G. Jones (52 Covers)! Worlds will live and heroes will die in this epic tale spanning the beginning and end of the DC Universe!
The entire Multiverse is threatened as the mysterious Libra assembles an army of the DCU's most terrifying super villains. But what is the ultimate plan, and who will live to find out?
Retailers please note: This issue will ship with two covers by J.G. Jones that will ship in approximately 50/50 ratio. Please see the Previews Order Form for more information.
On sale May 28 o 1 of 7 o 40 pg, FC, $3.99 US

FINAL CRISIS: SKETCHBOOK
Written by Grant Morrison
Art and cover by J.G. Jones
Take a behind-the-scenes look at the process of creating Final Crisis! Featuring sketches and character designs by J.G. Jones and script notes and designs by Grant Morrison, this special issue will give readers a sneak preview of what to expect in Final Crisis.
On sale May 14 o 32 pg, FC, $2.99 US

JUSTICE LEAGUE UNLIMITED #45
Written by Alex Gradet
Art by Scott Cohn
Cover by Zach Howard
Metropolis is under attack thanks to some serious monkey business! And somehow, the League is powerless to stop the threat. How will Mary Marvel and Booster Gold save the day?
On sale May 7
32 pg, FC, $2.25 US
Posted by Diabolu Frank at 12:00 AM