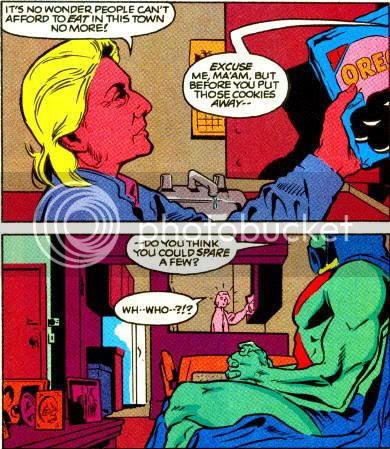 J'Onn J'Onzz, former philosopher and poet, now a Martian Manhunter who'd faced "countless villains who still rue the day they first crossed his path," was on a mission of incomperable importance: Must. Find. Oreos!

Struck with a case of the midnight munchies, J'Onzz couldn't find a single bag after hitting countless all-night markets in Manhatten. Martian Manhunter stumbled upon a robbery in progress, and invisibly snatched bullets in midair before they struck the store's owner. "Hey, I know this dude! He's that Martian Manhandler guy from the Justice League--!" Manhunter clasped the barrel of a pistol, which the idiot young punk then backfired on himself. J'Onzz then assumed the turk's visage to confuse his multicultural partners (black-white-Asian) before stuffing them in a cooler. Instead of gratitude, the owner gave the Martian flack about making a mess. J'Onzz threatened to mop the floor with the ingrate. All he wanted was some damned Oreos!Unfortunately, an elderly woman had swiped the last bag in the confusion, so J'Onn followed her home.

Revealing his presence in her living room, the Super-Sleuth with a sweet tooth learned that she had to steal groceries to survive while her stock broker son was living large. Her husband was long dead, and at least in jail she would receive three square meals a day. J'Onn couldn't bring himself to take her in, and was touched by her loneliness, which he understood only too well. Reliving all of her heartbreaks gave the poor woman a massive coronary, as seen through Martian Vision. Before she died, J'Onn granted the woman's wish to see her son one last time...even if it was only MM assuming his shape. "Gone. Sleep long, sweet lady. Sleep well. You know...sometimes being a telepathic shapeshifter...can be a first-class pain!" He left without his cookies.

Len Wein's script was cute, even though it seemed like colorist Calvin Armstrong went out of his way to make a painfully stereotypical Korean vender look occidental. Maybe to keep the Asian American Justice Center from calling? Not only do we have broken English and the media's distinctly Korean brand of antagonistic consumer relations, but he even screamed "AIIIEEE!" when fired upon. I think he maybe had a Coolie hat under the counter somewhere.

The ten page "Help Me Make It Through the Night!" was Stuart Immonen's first mainstream professional work, and it would appear that the artist has an affection for the character. This may also stem from Adam Hughes' run drawing the character in Justice League, which was an obvious influence on the artist. Immonen has drawn a great many Martian Manhunter appearances over the years since-- more than just about anyone not directly associated with the character.
Posted by Diabolu Frank at 12:00 AM

Errr...maybe its just the scan, but that old lady looks positively purple! At first, I mistook her for a blonde, female version of Jemm, Son of Saturn!

I wrestled with noting this along with the color correction/error of the Asian shop keeper, but that old lady was colored way wrong on that entire page. In my trying to turn aging paper white while scanning, poor J'Onn's green will often skew yellow, but that was not the issue here. Blame Calvin...