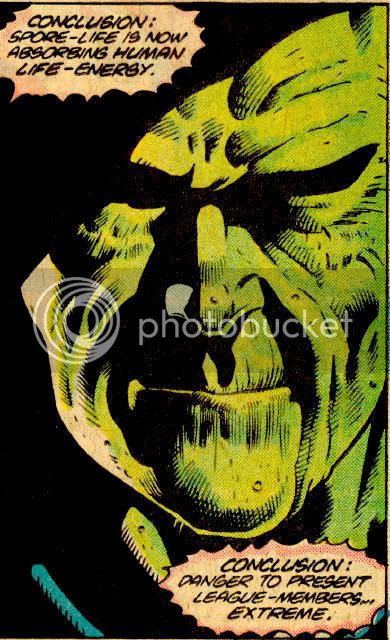 Martian Manhunter: "...according to the medical lab's sensor... Vixen is dying... Her life in indeed slipping away, like water through the sands of the Martian desert... but we can find no indication of disease. It is as if some external force were draining the very life-energy from her body... leaving behind a dried, mummified shell of the young woman we know..." Found a bit of the creature "Junior's" dried skin, which he studied with an ever-clouding mind while ordering Vibe and Steel after the beast. Leaned on League computer to compensate for his failings. Learned from it that "Junior" was a semi-sentient plant that developed from a microscopic spore that clung to Superman's cape on an extra-terrestrial mission. Told spore lives of life energy rather than sunlight."Gods of Mars." Collapsed into a coma before he was able to activate J.L.A. emergency distress signal.

Vixen: Too sick to mind that "dried, mummified shell" line.

Zatanna: Took "ashes" to Mama LaRue in Greenwich Village, who dispelled the notion it was from missing roommate Sheri Stanley. Proved to instead be graveyard dust, in use by a nefarious new magical mover and shaker about town. Zee followed up on a note left by Sheri to investigate the marina. Never acknowledged a painfully extraneous pair of numbskulls trying to pick her up as she walked down the street.

Gypsy: Argued with teammates over "Junior's" innocence, then ran off with it after the creature again attacked Vibe and Steel. Second Leaguer to age rapidly. 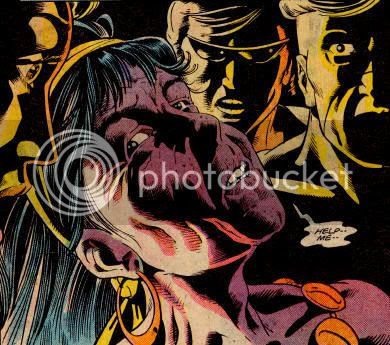 Vibe: Used his superior reason to convince Gypsy to reconsider the potential threat of "Junior." Yes, I just wrote a sentence combining "Vibe" and "superior reason." I can't believe it, either. Accidentally caused a small cave-in which using his powers against Junior, mostly to make me feel better about that "superior reason" business.

Steel: After both he and Vibe falter before Junior, deduces the creature has an effect on the quality of reason in person within its proximity. That helps explain Vibe's "superior wisdom," but created the whole new problem of Steel's displaying keen deductive reasoning. Everything I know is a terrible lie!

Interlude: On the planet Kalanor, servants tended to a blazing pit. "Behold the Flame of Py'tar. Those who are not destroyed by its purifying embrace achieve wisdom and power beyond imagination. Will you risk the flame, master?" A nude silhouette with a scalloped head answered, "For what I seek, I would risk eternity." This being then allowed the blaze to immolate him. "The pain is indescribable: It goes beyond agony to the far reaches of madness. He welcomes the pain, he embraces the madness. Soon he will have power enough to take vengeance on the Justice League. His wild laughter ends in a scream."

Sue Dibney: Ate pizza with Ralph last night. Returned home to the Secret Sanctuary with a new costume for her husband, this one her favored color of purple. Almost ran over Junior and Gypsy. Discovered Gypsy's serious ailment, then joined Steel and Vibe for a return trip to headquarters. Realized "Junior" was truly evil, enjoying his food at the expense of our heroes, who are all near death by issue's end. Finding J'Onn J'Onzz while on the run from an unknown being that emerged from the chrysalis of Junior, Sue activated the alarm before falling herself.

The Creators: Luke McDonnell and Bill Wray seriously brought their A-game in showing the Leaguers' terrible decline into infirmity. Gerry Conway follows suit, elevating the dread at the overwhelming horror the heroes face. Even colorist Gene D'Angelo was noteworthy for keeping up the mood and subtlety. Outstanding team effort.

Most Embarrassing Vibe Quote of the Issue: "Madre dios! A cave-in!"

There are NO embarrassing Vibe quotes. Embrace them all.

By the way, JLD, I hereby lightheartedly accuse you of stuffing the ballot box over at my blog where the Martian Manhunter is currently winning the poll of "Who should I designed a personal Heroclix map for?"

Everything I know is a terrible lie!

Sounds like a fun psuedo-horror issue. Although the idea of both Vibe and Steel making somewhat good decisions is enough to make one pause.

I haven't been good about making the blog rounds lately, so my alibi is that I wasn't even aware there was a MM-related Heroclix thing going on. Now, well, might ought to do something about that...