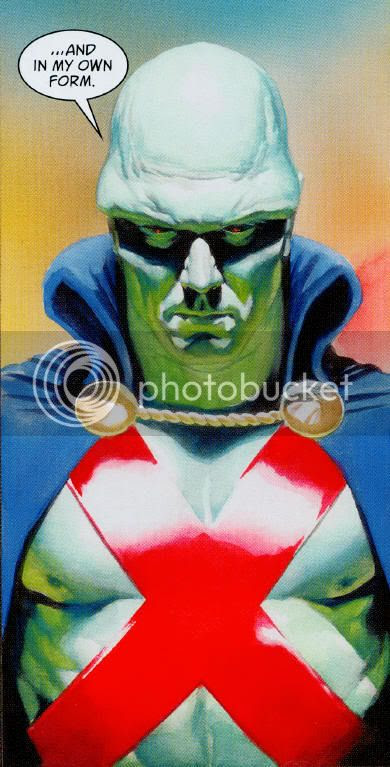 In the prior "Secret Origins" tabloid, the Martian Manhunter was shown putting out a forest fire with part of a glacier. Here, J'Onn J'Onzz rescued a jet with a blown engine. "In a strange twist of fate, a refugee from a dead world became a protector of this one." J'Onzz would also narrate, when applicable, the only dialogue-driven installment of Paul Dini and Alex Ross' series of specials concerning DC heroes combating "real world" problems.

Upon setting the plane down safely, J'Onzz was greeted by Wonder Woman, with news of a spreading plague. J'Onzz telepathically contacted a classic League of Superman, Barry Allen Flash, Hal Jordan Green Lantern, Aquaman, and the Batman. All but Superman and Aquaman were able to convene at the Pentagon for a briefing. Batman expressed telepathic concern to J'Onn that the government may be hiding something, but Manhunter replied he sensed only their panic at a threat beyond their ability to contain.

The Manhunter from Mars flew to Africa to investigate the genesis of the plague. "Coming from the ruins of Mars, I looked upon Earth as a paradise, a treasure to be shared, not a prize to be conquered. It saddens me to think that many born here can see it no other way. I often wish it were within my power to touch every human mind at once and let them see their beautiful world through my eyes." Arriving, he was met by the Flash, who was wearing a containment suit. It seemed all the victims of the plague were still alive and conscious, but unable to speak or activate any motor function. Green Lantern soon joined the pair. "My ring beam is shielding me, and I can see Barry brought protection. How are you holding up, J'Onn?" J'Onzz replied, "My shape-shifting ability allows me to keep my molecules in flux. There's nothing tangible for the contaminants to infect." GL traced the plague's source to a meteorite, which Lantern sealed in an energy bubble and sent back to the states with Flash.

After his fellows departed, Manhunter remained to assume the form of an African male and give comfort to the stricken. However, jet fighters from a nearby nation soon arrived in a bid to "cleanse" the area by fire. J'Onzz flew up to snatch incendiary missiles out of the air and disable the jets, but not before a village was set ablaze. "I break through the dwelling to face a double assault. The fire swiftly drains my strength as cries for help rip through my brain. I've always found it ironic that humans cite the creation of fire as the seminal moment of their species' advancement. On Mars, fire was a chaotic element that weakened my people... In the end, I am just as helpless as the souls I tried to save. And then, salvation is there for me." Superman was sorry for running late. The Man of Steel handled the situation swiftly, then shared with Manhunter the unease felt by the world in the face of both the alien virus and other "visitors" such as themselves.

After a series of complications, Ray Palmer, better known as the Atom, found the cause of the debilitation and aided Batman with formulating a cure for the virus. Ultimately, it only affected the human mind, feeding off energy specific to our brain. Despite this breakthrough, the League not only had to distribute the cure, but settle civil unrest brought on by the plague. The combination of the League's miracle cure and the need to handle rioters less than delicately cast a pall over the team's reputation.

The group felt compelled to address these concerns before the United Nations. Initially, Superman appeared to be the speaker before this collective, until Martian Manhunter shook off the disguise to confront the world's xenophobia directly with honest words. "We cherish your trust, and hope you will always find us worthy of it. That trust will allow us to preserve liberty for all people, and bring justice to those who would deny it. My partners symbolize the salvation my planet never received. Please accept us as part of your world, not apart from you." Superman and Martian Manhunter then flew the contaminated meteorite into space, destroying the last shred of the super-plague.

By Paul Dini and Alex Ross.
Posted by Diabolu Frank at 12:00 AM