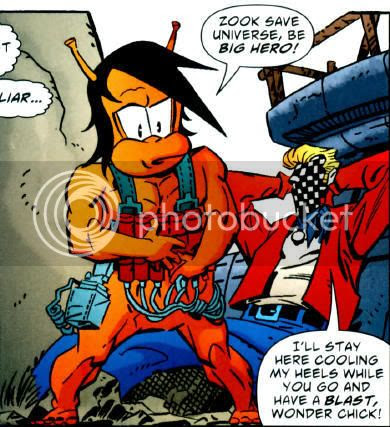 Zook made another appearance in a modern comic recently, after a good 35+ years of being ignored by DC Comics. I don't even recall Zook appearing in any reprints over those years. Anyway, while it's nice that Keith Giffen remembered Zook and drew him in his classic appearance, his use of the character was, shall we say, less than flattering?

Ambush Bug has a new enemy in Go-Go Chex, a mod '60s throwback who speaks in dated slang and calls everyone "Wonder Chick." Chex enlists Zook as a suicide bomber, which makes me really glad I checked the date before making this my 9/11 post. Anyway, Zook is last seen running toward Mr. Nebula, a parody of Marvel's Galactus, but rather that devouring worlds, he redecorates them badly. Our pet screams "Zook despise new chichi breakfast nook! Me rather die than eat in there one more--"

Zook went "POOOM!" Mr. Nebula was in no way disturbed by this. Ambush Bug observed, "Wow, this time it really was personal!" Don Gaye Apparel, a sort of herald to Mr. Nebula, covered his face with a dainty handkerchief and moaned, "Yes, he made quite a stink!" One more dead sidekick for DC Comics.

The main problem I had is with Robert Loren Fleming's script, as he doesn't know how to write dialogue for Zook. Put simply, Zook speaks in broken English, dropping most articles/determiners. Let's examine this.

Robert Loren Fleming Dialogue: "My name be Zook!"
Zook is not a pirate, but an other-dimensional pet/sidekick. A correctly incorrect Zookism could read "I Zook," or perhaps "Me Zook." To say "Me am Zook" is a Bizarroism, while "I am Zook" is too close to proper English to be appropriate.

Robert Loren Fleming Dialogue: "Me do it if you shut your trap!"
Zook should probably refer to himself in the third person here, and should always refer to other characters by name. Being an exposition monkey, repeating the intended action is also best. In addition, "trap" seems a bit too informal. I would suggest "Zook blow up Nebula if Go-Go Chex shut mouth!" Since Go-Go Chex has no visible mouth, "be quiet" would be all the better.

Robert Loren Fleming Dialogue: "Zook save universe, be big hero!"
I have no real complaint here, although I'd substitute the comma for an em dash. That's how Jack Miller would have done it.

Robert Loren Fleming Dialogue: "Death to infidel!"
There are three syllables in "infidel," making it quite a mouthful for the typically mono- or duo-syllabic Zook. The Arabic "kafir" would be more wieldy, but likely too obscure. For the sake of the joke, "Die infidel" may work, though I'd go with something like "Godless Mister die," or better still, "Tee-hee! Zook make bad Mr. Nebula go boom-- get into paradise with Manhunter and Latka Gravas!" A Balki Bartokomous reference might work better, but dropping the surname would be best.
Posted by Diabolu Frank at 7:00 PM

Hey, it could be worse. Maybe.

Wasn't Zook (or at least a stuffed animal that looked like Zook) in a JLU cartoon?