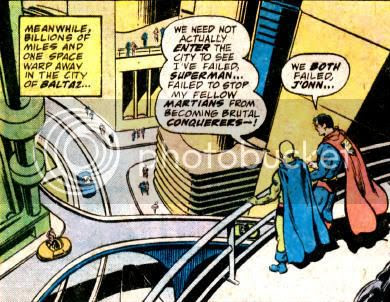 An underground city located in the Primitive Zone of the planet dubbed Mars II, billions of miles from Earth. Founded a thousand kilibars ago, or roughly 2,000 Earth years. Superman described it as "a legendary city of peaceful, highly civilized beings." It has been further said to possess riches and a "fabulous civilization." Baltaz is governed by a ruling council, and lacks an army or other obvious defenses. Baltaz benefits from two natural sources of protection, its concealed nature and unique atmosphere, as well as the oversight of the Old One, as written on the Tablet of Tal.

The first Martian to discover the city was military chief N'or Cott, while on a scouting mission. Cott murdered a citizen to keep his presence a secret, but the native cursed Cott with his dying breath, saying the city's "very air shall avenge my death." The city's atmosphere did indeed prove highly allergic to Martians, causing their flesh to mottle and cells to die after contact. It is presumed the atmosphere would be similarly deadly to other invading races, though the Kryptonian Superman suffered no ill effects from exposure.

Baltaz was the subject of an invasion attempt by Re's Eda and an army of surviving Martian immigrants. The invasion was halted through the efforts of Superman, Batman, and Martian Manhunter prior to any forces entering the city.