The Vile Menagerie: THE CONJURER 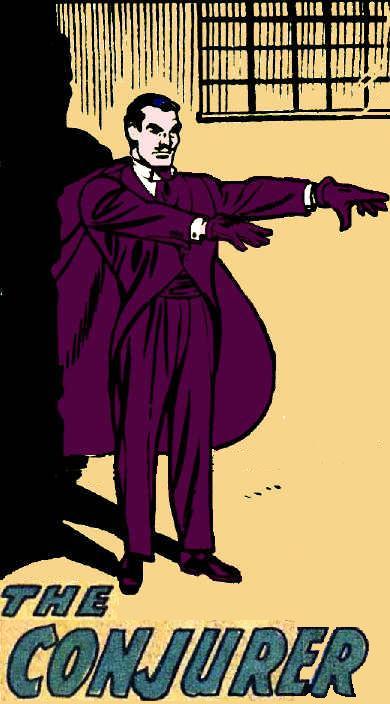 History:
Using "magical devices," the Conjurer began a string of robberies in the city of Middletown, bringing him to the attention of the Manhunter from Mars. In his role as Detective John Jones on the local police force, the Manhunter requested the Conjurer's case, but was saddled with a documentarian during his pursuit. Stymied by an inability to use his Martian powers while being filmed, Jones was repeatedly thwarted by the Conjurer's chicanery, as the criminal made off with a variety of ill-gotten goods. During a final heist at the Yardly Toy Company, the Conjurer knocked out the filmmaker with a model airplane, allowing the Martian Manhunter to bring his full power to bare. The Conjurer was beaten unconscious by giant Jack-In-The-Boxes guided invisibly by Manhunter and taken into custody by Det. Jones.

Powers & Weapons:
According to Martian Senses, the Conjurer possessed no actual super-powers, just slight-of-hand. Regardless, the Conjurer's skill as a magician and paraphernalia were impressive. Smoke bombs enabled him to "vanish," his top hat could release dozens of blackbirds, and he could move any number of objects at once through no clear means.

Quote: "Ha, ha-- So a detective has come here in the vain hope of stopping me, eh? We shall soon see about that!"