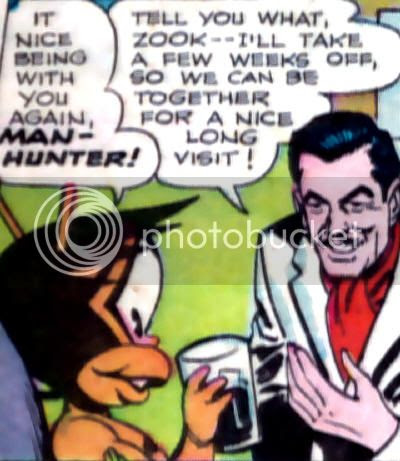 "Dawn over the Mediterranean, as the Martian Manhunter returns from a fruitless patrol in his never-ending search for the criminal syndicate known only as Vulture..."

"Another wasted trip! Sometimes I wonder if I'll ever catch up with Faceless! So far, I've been lucky in one respect... no one has suspected my secret identity-- as Marco Xavier, internationally-known playboy!"

Just then, Martian Manhunter's other-dimensional sidekick Zook appeared in Xavier's villa, and they shouted one-another's names excitedly. "I decide to pay you visit! It nice being with you again, Manhunter!"

"Tell you what, Zook-- I'll take a few weeks off, so we can be together for a nice long visit!" Unfortunately, the radio reported a strange, giant creature rampaging near Deauville Beach. "Uh-oh... this sounds like a job for the Manhunter from Mars! Stand by, Zook! I'll be back as soon as I can!" 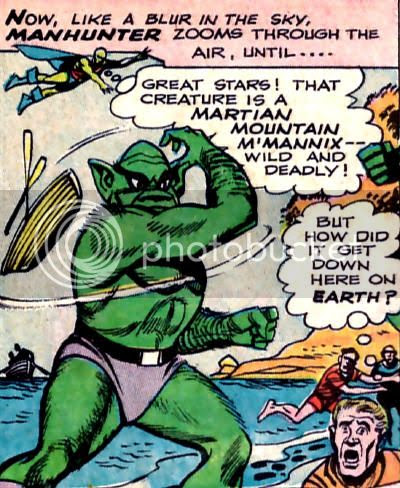 "Great Stars! That creature is a Martian Mountain M'mannix-- wild and deadly!"
"Hey-- that Martian Mountain M'mannix is kicking sand in our faces!"
"A-and tossing a row boat across the water, oars and all!"
"Oh, don't let it bother you, little boy!"
"Darn it, we Earthlings are sick of being treated like scarecrows by rampaging Martian menaces who mysteriously appear on our planet! We're sending off for the Alien Atlas, available in 'House of Mystery' every month for just twelve cents! That extraterrestrial monstrocity won't push us around again!"
*HERO OF THE BEACH*
"Oh J'onn, you are a real Manhunter after all!"

Manhunter repeatedly referred to the creature as a dumb beast in his thoughts, as that was his primary advantage over the towering sasquatch of the stars. Well-- except Manhunter seemed to fare unusually well in the brute strength department, as he gut-punched the M'mannix and tossed him on his butt. Meanwhile, it was the Martian Mountain M'mannix with the smarts to toss a log at children on an amusement park ride, distracting Manhunter as it made an exit. The log also fullfilled any Ambiguously Gay Quotient for the issue that Zook's appearance failed to cover, as Manhunter straddled the log and humped it clear of the kids. "WHOA, THERE!" Indeed. 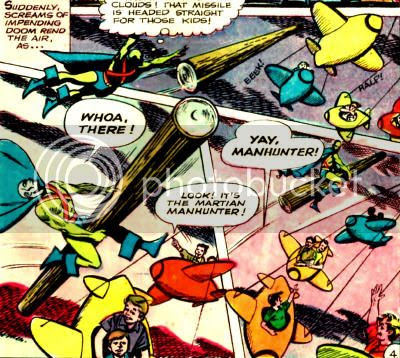 Detecting something was amiss, the Sleuth from Outer Space uncovered a single seater space ship, too small to fit a Martian Mountain M'mannix inside. Manhunter first heard, then spotted the M'mannix approaching, presumably with Martian Vision, though drawn as if he were projecting fire from his eyes. Joe Certa must have been in a weird mood that month, as he also drew the Martian Mountain M'mannix shooting flames out of its nose on the splash page, though nothing of the kind appeared in the story.

Again showing the brains to recognize the jig was up, the "M'mannix" verbally greeted the Manhunter, revealing that he was a regular Martian that only took the form of a beast. "Yes... we Martians have definite advantages over Earthlings, don't we?" The xenomorphic furry had six comrades waiting on the moon while he tested the mettle of Earthlings, and socked the Manhunter to reach his ship and inform them we're wussies. "That evil Martian may be my match-- but his ship isn't!" Shame some random old man (Monty Moran?) was lighting his pipe somewhere in the distance, causing our hero to lose all his powers and whimper. 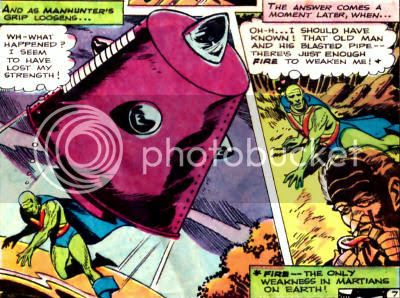 Marco Xavier was up for another bottle of whine back at his villa. "Think of it, Zook... seven evil Martians... enough to control all the Earth!" Zook reminded Xavier of the old man, which gave him a plan...

The evil Martians couldn't have been too smart, as they landed their ships in the same field as the one first departed from. However, they did employ Martian abilities to turn two ships into clown cars that fit the seven of them, then emerge from them in the form of Martian Mountain M'mannixeses. Why? Manhunter refers to each as his equal, they can all shapeshift, and the previous battle made it clear that if anything the M'mannix seemed weaker than a regular Martian.

"Do you really expect to stop us all, fool?"
"If you think I can't, come and get me!"
"Invitation accepted!"
The Manhunter then promptly beat the snot out of the lot of them. Really, I'm as surprised as you are. 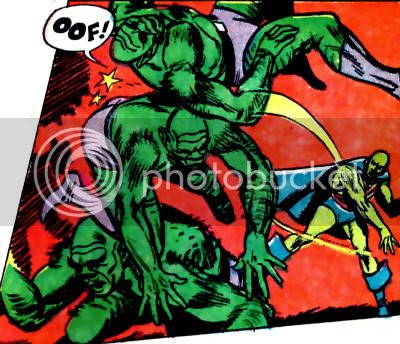 "S'tor-- you told us that each one of us was his equal in power!"
"I was not lying! I fought him to a standstill myself!"
S'tor, you're so totally lying! You sucker punched J'onzz once, then ran back to your buddies!

As it turned out, Zook was hiding behind a log with a lit candle. "Tee-hee! That great idea of Manhunter's-- to weaken bad martians before they reach him!" Manhunter couldn't pursue the other Martians because of the flame, not that any of this made sense, including Zook's holding a candle when he has heat-based powers. Other nonsense included Manhunter again trying to pull a space ship down, this time to no clear end. The first alien craft took a sharp evasive action that plowed it into the second, apparantly killing everyone inside both.

"Too bad space ships get wrecked, Manhunter!"
"Yes, Zook... it might have been nice to hop into one of them-- and pay an unexpected visit to my family and friends on Mars!" Just wash the bits of Kennedy's skull off the trunk and go for a spin, huh? That's cold man.
Posted by Diabolu Frank at 7:20 PM