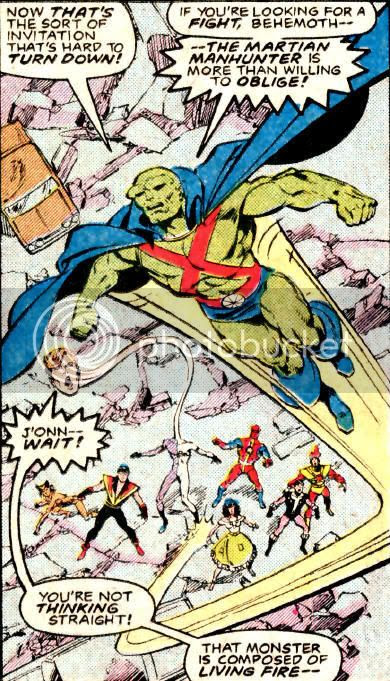 Batman: No longer on the team. Blinded during riot before he could save Robin, who was later hospitalized from the severe beating he received from an angry mob.

Vixen: Stood near Vibe, and previously heard the warning of a towering being composed of molten plasma terrorizing the United States, "the fallen angel-- come to purge this frail Earth of false gods and graven idols!"

Steel: Stood near Firestorm, who alerted the Detroit League to the threat of Brimstone.

Gypsy: Stood near Cosmic Boy, the temporally-displaced Legion of Super-Heroes member who tried to help against Brimstone.

Vibe: The only member of the Justice League to launch an offensive against foe. Used vibratory powers to knock Brimstone off its feet.

Elongated Man: "J'Onn-- wait! You're not thinking straight! That monster is composed of living fire-- and fire is a Martian's greatest weakness!"

Martian Manhunter: "If you're looking for a fight, behemoth-- the Martian Manhunter is more than willing to oblige!" Flew at Brimstone, but changed course at the last minute. "I allowed my emotions to overwhelm me for a moment-- and that could have proven disastrous!" Saw Brimstone level a somewhat indirect attack. "He's bringing the entire building down on top of us-- more rubble than even I can handle! Take cover, Justice League!"

The Creators: The Detroit League get the chance to be drawn by John Byrne in his prime, with Karl Kesel on inks, and perspective leaves most of them the size of ants. At least Manhunter and Paco looked good. Plotter John Ostrander gave Vibe a rare spotlight moment, but Len Wein's dialogue was all exposition.

Most Embarrassing Vibe Quote of the Issue: "You are one ugly sucker, amigo-- and too hot to get close to!" 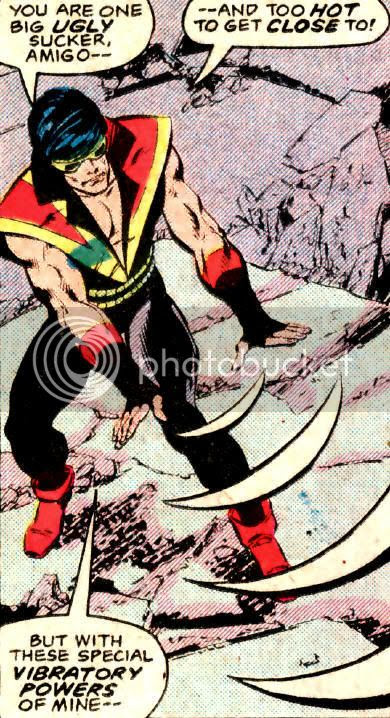