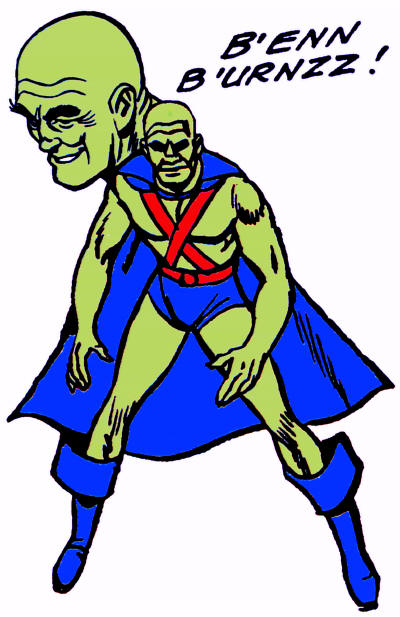 B'enn B'urnzz was a criminal Martian hiding out on Earth in the year 2062. With a special "Anti-Martian Multi-Weapon," he was soon "smoked out." Futuristic policemen pursued B'urnzz into a laboratory containing a new time machine, which B'urnzz used to escape to one hundred years into the past.

B'urnzz enlisted a gang of Earthlings to rob a bank with him in Middletown. The Martian simply smashed through a wall, then swatted the security guards' bullets away like flies. B'urnzz ripped the floor out from under the guards, sending them reeling out of the bank. To open the vault, B'urnzz spun in place at incredible speed until reaching a sonic frequency that shattered the feet-thick steel door. B'urnzz's men grabbed all the money that they could carry, but as the party exited, they were confronted by J'onn J'onzz, the Martian Manhunter.

B'enn B'urnzz scoffed at the Manhunter's demand that he turn himself in, and the Martian Gladiators sparred on a street for hours without either gaining ground. Finally, the Martian Manhunter broke away to inhale a mouthful of gasoline, with which he drew a circle around B'urnzz. A police officer who had traveled from the future in pursuit of B'urnzz then lit the circle, and it was into the custody of this "Futureman" that J'onzz released the unconscious Martian criminal. B'urnzz's human posse were similarly led to jail. 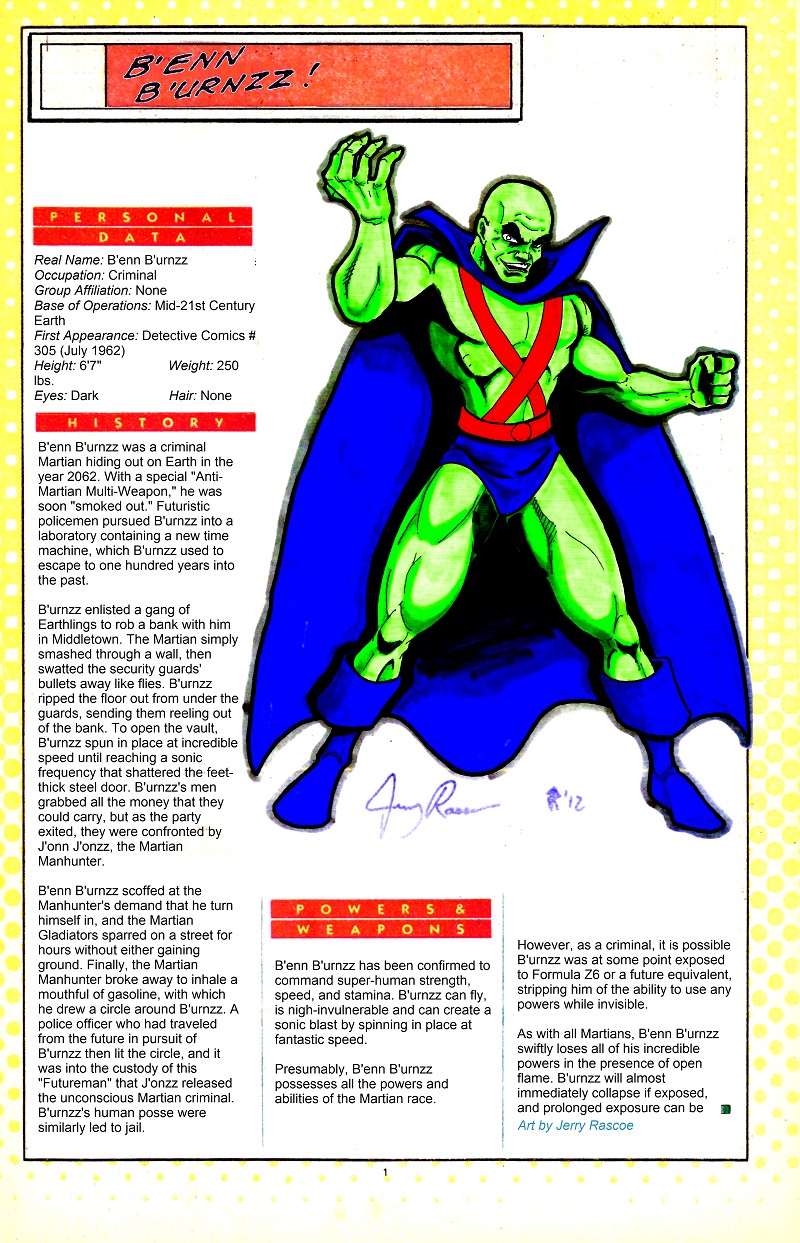 Powers:
B'enn B'urnzz has been confirmed to command super-human strength, speed, and stamina. B'urnzz can fly, is nigh-invulnerable and can create a sonic blast by spinning in place at fantastic speed.

Presumably, B'enn B'urnzz possesses all the powers and abilities of the Martian race. However, as a criminal, it is possible B'urnzz was at some point exposed to Formula Z6 or a future equivalent, stripping him of the ability to use any powers while invisible.

Weaknesses:
As with all Martians, B'enn B'urnzz swiftly loses all of his incredible powers in the presence of open flame. B'urnzz will almost immediately collapse if exposed, and prolonged exposure can be lethal.

Distinguishing Features:
B'enn B'urnzz bears a striking resemblance to J'onn J'onzz in height and build. However, his eyebrows are much bushier, while his cheekbones are higher and more pronounced. He appears older than J'onzz due to wrinkles and a generally more worn appearance.

Quote:
"And now, Earthlings, I shall demonstrate the wisdom you showed in joining forces with me!"

Created by: Jack Miller and Joe Certa
Posted by Diabolu Frank at 7:00 PM

Why does he have a big head growing out of his back?