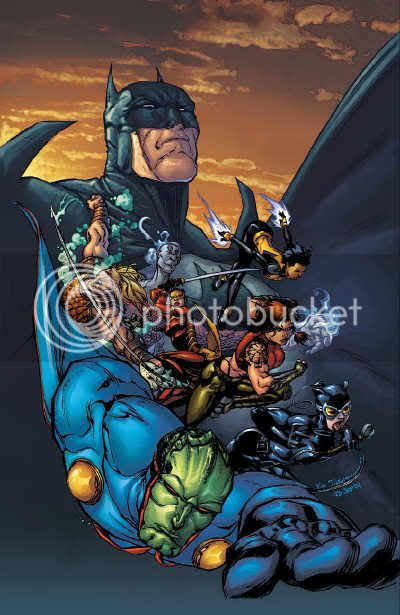 Way back in the earliest months of this blog, I ran an editorial criticizing DC Comics for revamping their relaunch of Batman and the Outsiders before the first issue had even shipped. The first three issues were solicited with a different plot, creative team, and even group membership than the books which actually shipped (on time, as I recall.) Heck, even the earliest promotional piece was altered before they even reached the public! I thought it might be nice to take a second look at what might have been, and compare it to what actually was...

Tony Bedard (BIRDS OF PREY, COUNTDOWN) and Koi Turnbull (Fathom) launch a bold new direction for the DCU's misfit heroes! The rules have changed all over the DC Universe - but for the Outsiders, they're still just things that were made to be broken!

It's a fresh game of dirty pool for the Outsiders as the Dark Knight sends his new team to the frontlines of a massive assault on metahumans. Batman and the Outsiders must fight even dirtier than their enemies...and risk becoming the supervillains they despise!

The book's description was later changed to "The new era for the team begins with Catwoman, Metamorpho, Katana, Grace and Martian Manhunter called into investigate a potential time bomb at Jardine Enterprises – but will the new team’s first mission also be it’s last?" You can read more about it here.

BATMAN AND THE OUTSIDERS #2
by Tony Bedard; Koi Turnbull and Art Thibert
DC Comics, 32 pgs., $2.99, available November 21, 2007
Diamond Code SEP070151
The team attacks London for a high-profile abduction that marks them as Super-Villains in the eyes of the entire world — but that's exactly what Batman wants!

What was actually published.

BATMAN AND THE OUTSIDERS #3
Written by Tony Bedard
Art by Koi Turnbull & Art Thibert
Cover by Eric Battle & Art Thibert
Batman's dual loyalties are tested as the Outsiders and the Justice League clash over SALVATION RUN - but the Outsiders' underground work has already brought an architect of the Run over to their side!
On sale December 5 32 pg, FC, $2.99 US

What was actually published. Note that the solicited cover remained, and partially reflected the changed membership of the team.
Posted by Diabolu Frank at 11:59 PM

The whole goof with the relaunch of Outsiders was bizarre. I mean, what kind of blow is that to have a book taken away from you before you even launch it? And then to have the writer who got the book from you swear off the entire company not even a year later? The title has gotten its footing back under Tomasi but the whole ordeal was ridiculous.

This was one of the reasons J'onn's death POed me so much...they never really gave him a chance to try and work with this book. The whole thing seemed a mess from the start!

I was really hoping to read about the new Aquaman in this series. I was torn when the changes happened. I was bummed about losing the new Aquaman, but was happy to pick up Chuck Dixon.

Agreed that the series is really good right now.