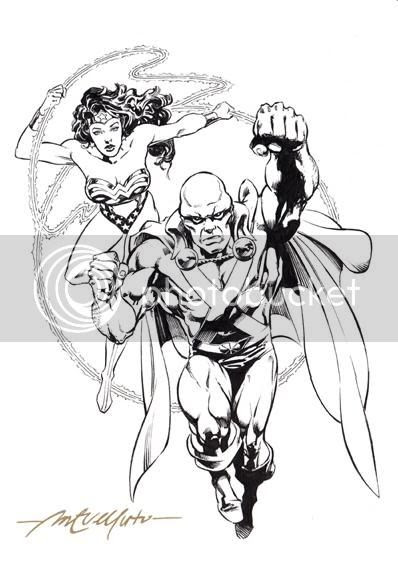 I don't know why Sal Velluto isn't getting much work anymore, as he's an awesome penciller in the Neal Adams vein who really hit his stride when paired with inker Bob Almond. I don't own much original comic art, but I'm very proud of the Black Panther Sketch I picked up years ago. I wish the owner of this piece had offered up a larger scan, as it features two of my favorite super-heroes ever. In fact, I've quietly started Diana Prince: Wonder Woman, yet another blog I won't have time to do a proper job on for weeks at a rip.

Whew. I'm sorry gang, but I'm still pooped, and have no Martian Manhunter momentum right now. I'll get back in gear  tomorrow. Until then, might I recommend one of my other neglected blogs? Justice League Detroit has suffered in recent weeks, becoming more of a Zatanna art blog, but I've had some Aquaman rants and a Rob Liefeld Vixen pin-up in recent memory. I've renamed and resdesigned my former Mighty Mite blog as Power of the Atom, and that's been picking up steam. I probably shouldn't even bother bringing up ...nurgh..., which hasn't been very good all year, and has lapsed into a cycle of weekly comic reviews and linkposts for months.

Again, my apologies, and hope for better material very soon.
Posted by Diabolu Frank at 11:14 PM

No worries, you've earned plenty of good will. You've earned a vacation, or at least a lax period.

Just because you don't see his work in American comic books, that doesn't mean he isn't still busy. He's drawing THE PHANTOM for the Swedish publisher, Egmont, and doing illustration work for the Mormon church.

Frank, everyone needs some rest. Don't worry, I doubt that you will run out of more stuff for you to do.

I did notice that the Martian Manhunter in the 2000s link needs an update as J'Onn is back: http://idol-head.blogspot.com/2008/06/martian-manhunter-in-2000s.html