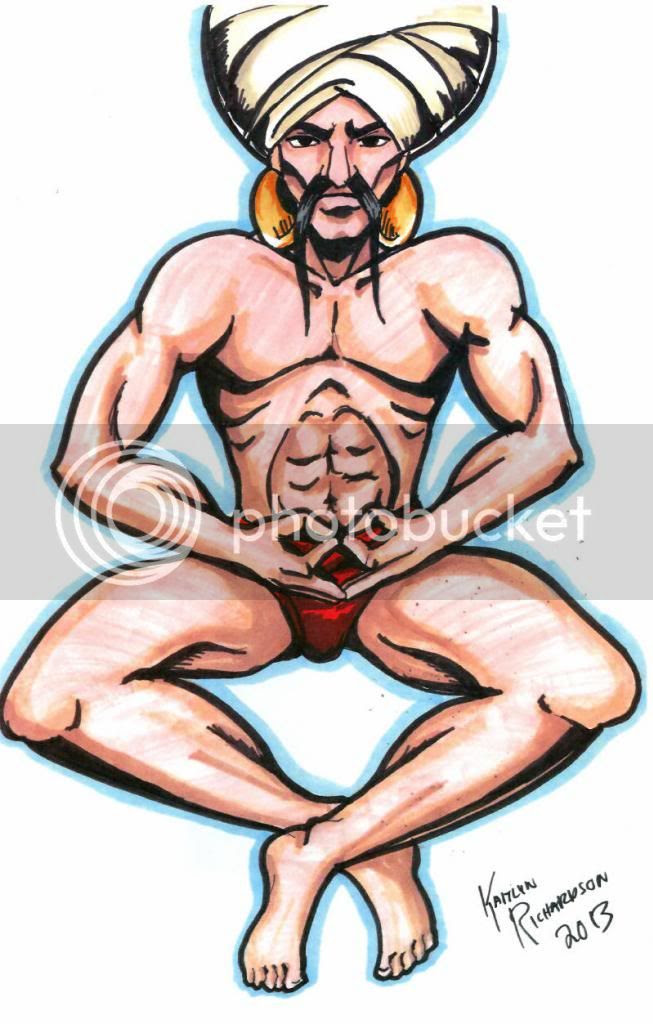 Here's the last of my Diabolu Idol-Head related Awesomest Alien Atlas Art Anytime commissions from last year, this time featuring The Genie of Gensu. The piece was by a tablemate of Venomee Commission artist Kaleigh “Kalo” Hvizdos (whose boyfriend also contributed.) I couldn't find any sort of live gallery for Kaitlyn Richardson-- only a deviantART page without images by someone of that name. That's too bad, since I quite like this piece, which does a good job of capturing the giant scale of the genie by filling out the 11" x 17" board, as well as his foreign air through the meditative pose. She even kept the tendency in Joe Certa's one story with the character for the mustache to look like it's growing directly out of his nostrils! It's funny; I just caught an old episode of I Dream of Jeannie that featured an evil male djinn that got me to thinking about the possibilities of this guy, but like that '60s show, he's probably best left as a period novelty.

Now that I've finally got the heavy lifting of "Happy Zook Year" and two months worth of idol-head entries out of the way, I hope to have the time and energy for better general blogging. With Comicpalooza 2014 eight weeks away, and about seven 2013 pieces yet to appear online, I need to get as many of those remaining works out as appropriate before the whole cycle starts again! Should I save the four Martian villains for some sort of alliterative May theme? Should I save the David Mack for our seventh anniversary in September?
Posted by Diabolu Frank at 12:00 AM