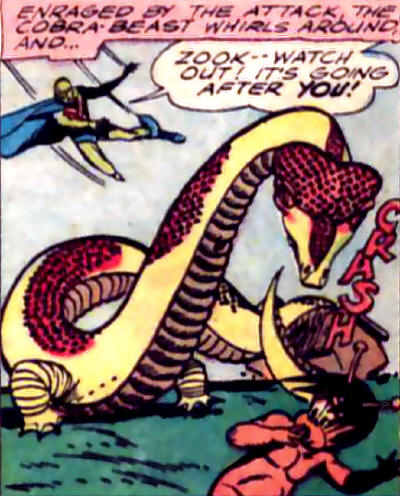 History:
At the thirteenth full moon since its reactivation in modern times, the Idol-Head of Diabolu unleashed a creature Zook recalled from the Diabolu Book of Legends. "With tongue and crushing power, the Cobra-Beast will overpower! Only the contact of one from an alien sphere can tame the evil beast-- though he himself will disappear." As the Cobra-Beast cut a swath of destruction through Central City, the ailing Zook tried to stop the Martian Manhunter from directly interacting with the monster, for fear of losing his friend forever. Duly warned, the Alien Atlas consistently failed to halt the fantastic beast through long range attacks, and the firepower of local authorities fared no better. Caught in a situation where innocents were in immediate danger with no other clear recourse, J'onn J'onzz engaged the Cobra-Beast physically, and appeared to be absorbed into its body. Conversely, the Cobra-Beast was merged into the shape-shifting Martian, who merely reverted to his normal form, erasing the Cobra-Beast from existence.

Powers & Weapons:
The Cobra-Beast was a giant reptile that mostly resembled a serpent, except for two arm-like appendages. It could crush large trucks and small buildings with its extended body and tail. Its forked tongue could lick very rapidly from dozens of feet away with explosive results that blasted apart structures, such as a Ferris wheel. The Cobra-Beast was invulnerable to most conventional weapons, clearly bulletproof and merely shed a layer of skin when caught in the explosion of a string of grenades.

There's just something quietly terrifying about a snake with legs. I mean, they're dangerous enough without legs.

I think there's more of an instinctual reaction to the inherent wrongness of a snake with legs. Like those dogs with baby faces in A Nightmare On Elm Street 2: Freddy's Revenge. That image alone validates the existence of the first sequel (though I like it beyond that.)