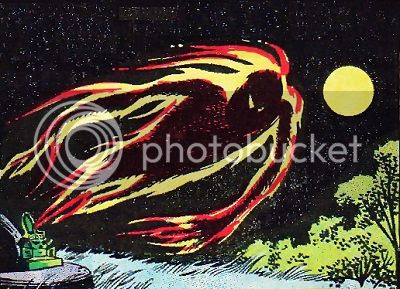 History:
At the tenth full moon since its reactivation in modern times, the Idol-Head of Diabolu unleashed a fire creature "on a grim mission of destruction," beginning with a cabin in the woods. Zook had been helping the Manhunter from Mars search for the idol-head in the area, but when the Alien Atlas was cast into an other-dimensional world by an unrelated menace, the imp was left to face the "strange fireball-creature" alone. It grew larger as it set more of the forest ablaze, and while Zook could generate cold enough to save some areas, the Fireball-Creature was too hot for Zook to handle at either extreme of his temperature powers.

The Martian Manhunter returned to Earth, but was trapped in the form of the creature he had been battling. Using the powers he'd gained in his altered form, J'onn J'onzz sent the "Fireball Nightmare" to the other-dimensional world, where the friendly (and suddenly imperiled) natives' advanced technology was able to freeze the fire-creature in a cube set at -25,000°

Created by Jack Miller & Joe Certa
Posted by Diabolu Frank at 3:04 AM

Poor Fireball-Creature... nobody loved him. He just wanted to live!

Yeah, he hasn't gotten a single vote in the poll.