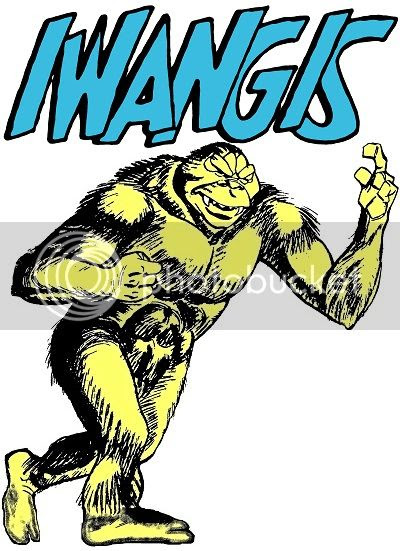 History:
On the eleventh full moon under the threat of the idol-head, a menace appeared that matched a quote from the Diabolu Book of Legends: "From stone to indestructible life, to lead a mighty army in strife." On a hilltop near an unnamed town, the towering stone statue of a simian beast mysteriously appeared in the night. Visitors alerted local authorities, and once the dawn's light struck the statue, it changed color to a bright yellow and began to move. The Martian Manhunter had responded to the initial reports, and arrived as the creature was coming to life to batter it about the head. With each blow J'onn J'onzz landed, an explosion occurred in the immediate area, imperiling innocent bystanders. Not only couldn't the Alien Atlas lay a finger on the self-identified "Iwangis," but he had to stop anyone else from doing so, and also protect onlookers from explosions whenever he failed. 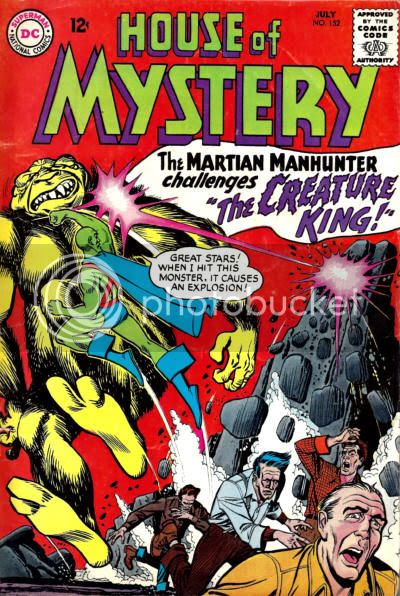 At an attraction for Farr's Circus, Iwangis created yet another complication. By transferring his own energy into a large stone statue of a lion, its fur turned orange and it sprung to life to follow the orders of "The Creature King." Together, the pair traveled to The Museum of Mythology and Natural History, where Iwangis raised an army out of a menagerie of statues based on fantastic beasts. A unicorn, "griffon," minotaur, dinosaurs and more were sent to attack innocents as a test of their power. Even as the Martian Manhunter fought some of Iwangis' creations, the creature leader was marching others of his army to the next town.

Having noted that Iwangis' color dimmed when he created a follower, and that all his converts were originally stone, the Sleuth from Outer Space hatched a plot. J'onn J'onzz sculpted a creature out of steel, coated it with sand, and attached a powerful electromagnet. Iwangis presumed it to be another stone statue, only to be held fast by the magnet as his life force drained away. Iwangis reverted back to stone, and was smashed to bits by the Manhunter.

Notes:
Without the living presence of Iwangis, the creature army reverted back to stone. Even while active, Iwangis' creations could not venture outside a hundred foot radius of their leader without returning to stone. Iwangis was believed to draw his energy from the sun's rays.

Quote: "Be off, puny one! I am the indestructible Iwangis!"

Created by Jack Miller & Joe Certa
Posted by Diabolu Frank at 3:44 AM

I decided to check out the Jeff Lemire interview on Justice League United and there are a few good things on J'Onn J'Onnzz.

He is one of my favorite DC characters plain and simple. And I think that goes back to his role in various Justice Leagues of the past, especially the Giffen stuff. I always thought he was great with all of the humor going on in that book. To me, he's always been the heart of the Justice League. And in this team specifically, he really is the core. He's the leader. He's a father figure to a lot of them. He is someone that even Green Arrow will respect and Green Arrow is pretty headstrong himself. He's the rock and he's also really powerful. His power is often downplayed because he's almost too powerful but I'm not going to do that. He's probably the most powerful character in the DC Universe, really.

I don't even remember this guy...I really need to reread my Showcase Presents.

will, that interview seems promising. But I hope they stay true to the core of who J'onn is. None of this Machiavellian stuff they tried to pull in the last JLA book, where J'onn was manipulating people left and right. I think that's completely antithetical to who he is: a character with a strong moral center who doesn't sacrifice his principles. He's the anti-anti-hero.

They start having him mindwiping people and I'm throwing the book across the room.

The one red flag I noticed is this: since when is Alanna Strange from Earth?! I can live with a Canadian Adam Strange, fine, but Alanna is Rannian, darnit! That's her whole identity. He makes it seem as if they are both from Earth. Highly suspicious. He doesn't seem to have a problem with messing with a character's identity.

Who knows, maybe they'll get J'onn right and completely mess up Adam Strange. One out of two is better odds than anything else DC is putting out right now.

Every writer is always like "I really like this dude," and often turn out to be full of it, but I think Lemire is the real deal. He's drawn J'onn J'onzz often, independent of audience and publisher, of his own volition.

I'm quite fond of Iwangis, which sounds like the start of a double entendre. Seriously though, he's in one of my favorite Silver Age Martian Manhunter stories. Cool premise, great complications, amusing nonsensical resolution.

Hmm, what if Alanna's family is actually from Rann and she grew up on Earth. I am sure that we will get some explanation why Rann is important to Alanna and Adam Strange. (Okay, I know that there was a science fiction show called the Powers of Matthew Star with Louis Gossett, Jr. guarding a young prince from an enemy occupied Tau Ceti. Maybe Alanna's family are refugees from Rann or just got stuck on Earth.)

That could work, I guess. But I like the idea of Adam being the exotic hero of another planet, and Alanna being part of that dynamic. If they meet on Earth (and she's from the same country no less) are they really that special?

Frank, I never realized the Iwangis were yellow...so much is lost with those black-and-white pages. HoM looks like it was one of the most colorful books of its time.

Given the history of Adam Strange retcons, what if Alanna was sent to Earth to find a suitable mate/hero to carry off back to Rann?

Liss, these stories are colorful in every sense of the word, though I'm not sure that they were exceptionally so by DC's period standards.

That could be interesting...like she was sent by Sardath to find someone to save her planet. I heard someone on CBR say Lemire's taking control of the Zeta Beam away from Adam Strange, and if this is so, this will be an improvement over his latest incarnation.

I'm so used to seeing Silver Age stories in black-and-white that color excerpts are like technicolor to me. I have a few copies of House of Mystery myself, but they're not in the greatest shape and they're kind of faded. Your recolors looked really sharp in comparison.

Still waiting on a (real) "Martian Manhunter Archives." Wouldn't that be nice? (The only archives edition I own is are Adam Strange ones and it's absolutely beautiful.) I wrapped it up in mylar and I never touch it because they were so darned expensive...

The Archive Editions were too expensive for me when they were coming out, but their low secondary market value and my getting on in life has allowed them to become attainable. Right now, I only have some Wonder Woman and T.H.U.N.D.E.R. Agents volumes, but I'd like to pick up all the Shazam, Plastic Man, Atom and Charlton ones. Amazon currently has The Adam Strange Archives vol 1 & 3 at $20, 2 at $13.

For the record: I-wang-is is the greatest name for a monster EVER!
"Be off, puny one! I am the indestructible Iwangis!"
-Yes you are... yes you are.

Only $20? They were like $40-$50 when I bought them oh so many years ago and I decided to splurge on them. At the time I was thinking, "I better buy these now because the price will be astronomical when they go out of print." Guess I was wrong.

I see the DC archives editions are still being published. Even Sugar and Spike and The Metal Men get an archives edition, but J'onn doesn't. I don't even know what Elfquest is, and they got one.

J'onn's on the cover of the Brave and the Bold archives, and I guess that's the best we can do.

I've got some thinly veiled Iwangis subtext running through the polls. Couldn't resist.

I read Elfquest as a kid, and liked it well enough, but could never bother to revisit as an adult.