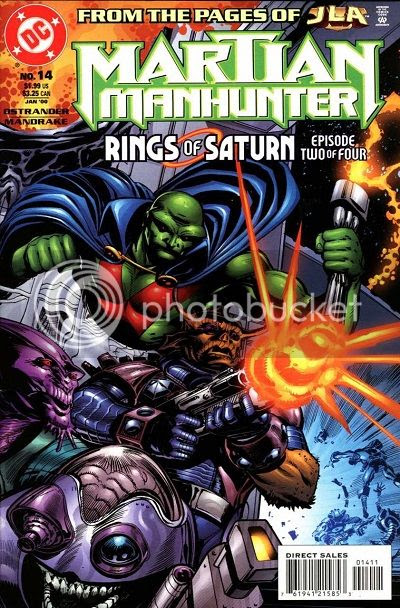 While I've sworn off most social media, I do see the value in Twitter for chitchat, novelties, promotion, and the dissemination of information. For instance, Michael Wagner favorited/was driven slowly insane by the 4½ hour long DC Sampler/audio adaptation of The King in Yellow I referenced as the Fire, Water, Burn Manhunter Burn Podcast, la édition troisième. Keeping me in mind, Wagner tweeted an article at The Beat covering DC Comics trade paperback offerings for late 2014/early 2015. This includes a follow-up to Martian Manhunter: Son of Mars, which came out so recently the sales numbers haven't been released yet...

Summary: The Martian Manhunter, one of the key heroes in The New 52, stars in this new title collecting his popular 1998 series. Featuring moody art by writer John Ostrander’s frequent collaborator, Tom Mandrake. After suffering colossal injuries at the hands of the evil Malefic, the Martian Manhunter has returned to Mars in an attempt to heal himself. But while he’s away, Saturnian ships arrive to reclaim Jemm, Son of Saturn, who is still recovering from being used as a pawn in “DAY OF JUDGMENT.”

I'm much more hesitant to recommend this trade than "Son of Mars." The first issue collected had nice fill-in art by Phil Winslade, but was also vile, racist, and the point where I officially turned on the book's creative team. I mean, it has Brazilians speaking Charo "cuchi-cuchi" Spanish and a voodoo witch doctor. Even fifteen years ago, that wasn't cool. The following issue was better, a DC One Million coda drawn by Bryan Hitch, except the actual Martian Manhunter #1,000,000 story still isn't collected. Next comes a Day of Judgment tie-in, which is problematic outside that context, not to mention being somewhat reliant on a reader's history with Justice Leagues Detroit and International (and even Task Force.) The meat is the four part "Rings of Saturn," a solid space opera, populated by characters introduced in the Jemm, Son of Saturn twelve issue maxi-series. The collection is bookended by the sudden, unexpected return of the D.E.O. for a big change in J'onn J'onzz's status quo as featured in a Secret Files & Origins story and Son of Mars. There is not one single story in this TPB that doesn't demand the audience to have read stories not in the volume. How many articles have you read that calls that sort of thing the downfall of the industry? Given that the Ostrander/Mandrake Spectre series is also in the process of being collected across multiple volumes, I no longer see this as signaling an Alien Atlas solo series, just another sign of DC CCO Geoff Johns' ongoing mancrush on Ostrander. Always the bridesmartian...
Posted by Diabolu Frank at 6:46 AM

I still don't know what to do with Twitter other than retweet io9 articles all day, but it is handy for being in the know.

I'm still hoping the release of these trades is a step in the right direction. But then my hopes get dashed again when I see Cyborg on the cover of the free comics inside General Mills cereal...why?? There's literally one called "Lost on Mars" and J'onn isn't on the cover.

I'm finding it comforting that I'm not constantly having to chase down token Magnificent Seven JLA appearances because a green brow peeks in for a panel.