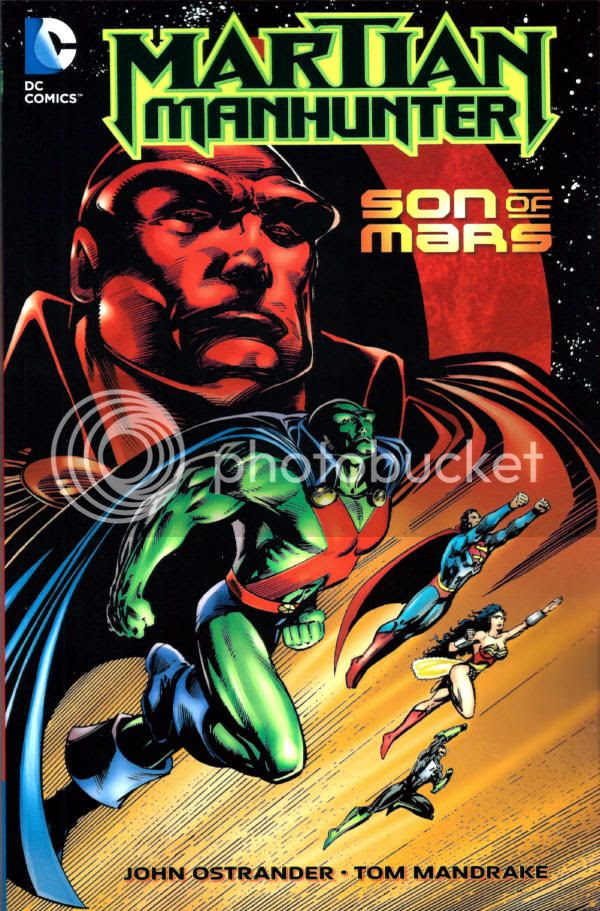 Almost a year after plans for it were revealed, the Son of Mars tpb is now available as solicited. You can see above that the final cover used was a repurposing of the 1998 series' #0. There are a few variations beyond obvious stuff like the updated DC Comics logo and the removal of the bar code/cover price/etcetera. The huckstering "From the pages of JLA" is removed, the creators' full names are now used, and the '80s "Martian Manhunter" logo is no longer partially obscured by J'Onn's bald head. I'm glad they didn't try to swap in the underwhelming "One Year Logo" that's still turning up on most Alien Atlas product.

To offer the bad news first, there aren't any significant extras in this package. Some art contained in these issues is reworked in Photoshop to create interstitial material, plus there's part of an image seen in period house ads, but otherwise bupkis. No profile pages, pin-ups, or other ancillary material. However, this volume does collect probably the best new reader friendly origin story and character overview. Ma'alefa'ak, the most enduring solo Manhunter villain and the only one to cross over into animation, gets his story done. Lesser foes Headmaster, Antares, and Bette Noir all get spotlight debut tales. The Morrison JLA figures prominently into the arc, including several nasty battles involving Martians. Jemm, Son of Saturn is reworked through an extensive retcon to have firm ties to the Sleuth from Outer Space. Stuff happened here that stuck, as opposed to that other U.S. Manhunter trade, The Others Among Us. 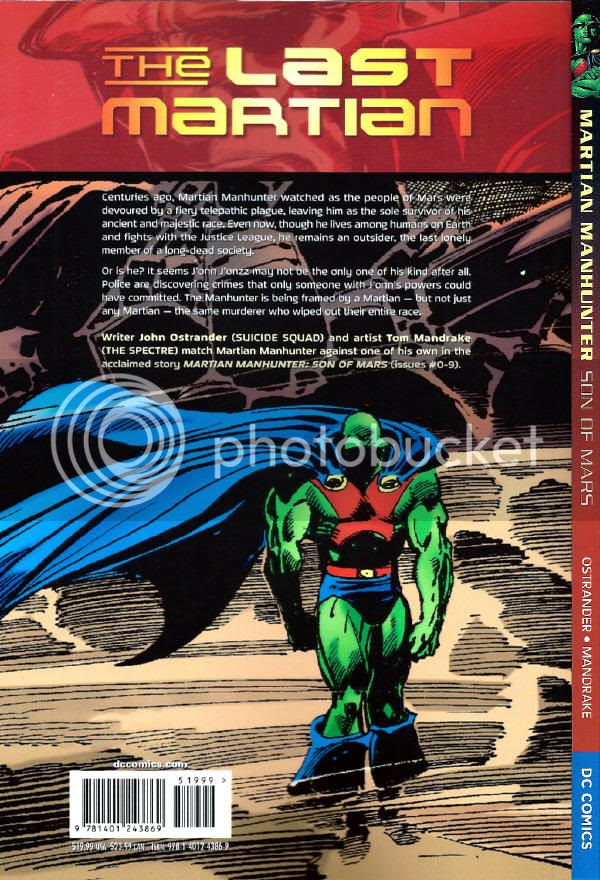 For me, the biggest draw was the glossy quality weight paper stock. Martian Manhunter launched on similar but thinner stock, only to suffer an ugly downgrade to cheaper dull pulp from #2 on that muddied the coloring to a deeply undesirable degree. I wish I had this trade when I needed to scan some art from these issues, because it was murder trying to make them halfway presentable for digital reproduction. I often failed miserably, as with the unintended fake "3D cover" to Malefic #1.

Was I a huge fan of this series? Not even remotely. However, there's a good many Martian Manhunter fans who hold this run in much higher regard than myself. The first year of the series presented most of the best stories, and they're less likely to rub casual readers the wrong way like they did a so-called "historian" such as I. Of all the trades available in the English language, Son of Mars is the safest bet for indoctrination purposes, or at least for folks who want to sample the Sleuth from Outer Space in his most popular, Post-Crisis interpretation.
Posted by Diabolu Frank at 4:10 AM

I've never read any of the issues collected in this edition, and even though I wasn't wowed about the later issues from this series that I did read, I am curious about this book. I might get it on ComiXology, or wait a little while and see if the issues are released digitally as individuals.

Not my thing, but I'm glad it's been collected. I think it's a step in the right direction.

Now they need to make a trade of American Secrets.