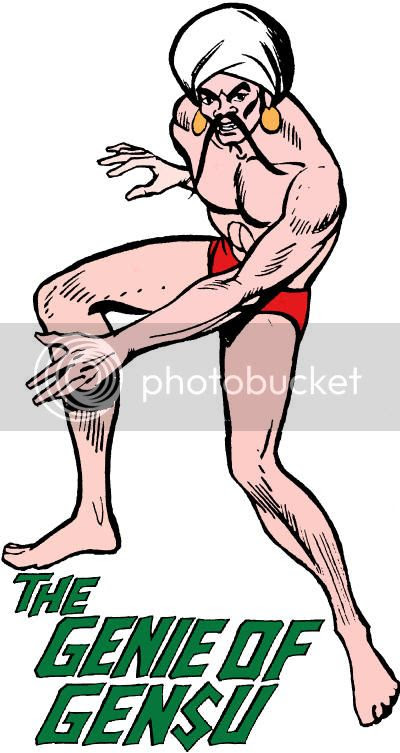 History:
Upon the twelfth full moon since its reactivation in modern times, the Idol-Head of Diabolu issued forth a giant genie. Petty hood "Mousy" Mulloy was the first man to see the genie manifest, and therefore became its master. As an initial test, the genie plucked a massive cargo ship from out of the sea. The genie was next used to take over a local gang, then robbed a bank by ripping off the roof and extracting its vault. This brought the attention of the Manhunter from Mars, whom he fought to a standstill before J'onn J'onzz vanished to stop further destruction of the city. The Sleuth from Outer Space deduced who the genie's master was, and tricked Mulloy into commanding the genie to return to where it had come from. The Genie of Gensu has not been seen since.

Powers & Weapons:
The genie appeared to have strength near that of the Martian Manhunter, and was comparably indestructible. The genie could fly and fire a destructive power beam from his eyes.

Created by Jack Miller & Joe Certa
Posted by Diabolu Frank at 2:21 AM

He reminds me of Shazzan... but maybe I just have Alex Toth on the brain.

Shazzan is so much cooler than the Genie of Gensu, and he was pretty much before my time, so even my very dim memory is good enough for the trump.