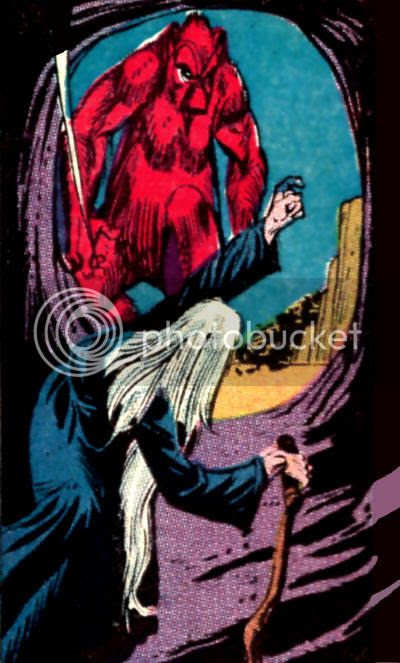 History:
The fourteenth and final full moon to cast its light upon the Idol-Head of Diabolu in the modern era saw it attempt to release a menace from out of smoke. The materializing creature was forced back inside the Diabolu Head by the timely arrival of J'onn J'onzz, except the Manhunter from Mars was himself drawn into the magical device and transported to its time of origin in ancient Babylonia. There, the Martian Marvel saw the creature fully realized and attacking villagers. Rescuing the lot, J'onzz met the former unwilling apprentice of Diabolu the Wizard, with whom the idol-head had been created. The apprentice guided the Martian Manhunter to the cave lair of Diabolu, who watched as the Alien Atlas appeared to reengage the final creature the wizard intended to imprison within the idol-head. Diabolu's Creature seemed to be the sole survival of the clash, and after destroying the deserted village of its former prey, dutifully submitted to confinement within the idol-head. However, the Manhunter had in fact destroyed the creature and used his shape-shifting powers to take its place. This allowed J'onn J'onzz to return to the present, then destroy the Diabolu Head once and for all.

Powers & Weapons:
Diabolu's Creature was another of the wizard's multi-story tall titans. Its primary power was firing "giant explosive bolts" from out of its snout. It was likely quite strong, resilient, and a solid climber, but did not come across as a serious threat to the Manhunter from Mars.