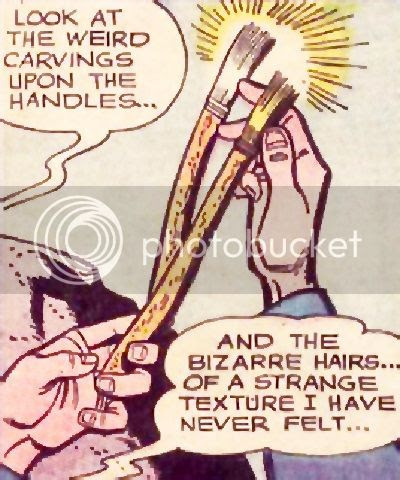 History:
Along a shoreline in the general vicinity of Middletown, the Idol-Head of Diabolu released strange paintbrushes, which were found by a boy named Andre. He gave the brushes to his father Pierre, who passed one to his brother Henri, both of whom were painters. Impressed by the weird carvings upon the handles and bizarre hairs of a texture they'd never felt before, the brothers decided to separate and try them out on different landscapes. Pierre's whirling water top image disappeared from his canvas and manifested in reality. J'onn J'onzz, in the area as part of his search for the Diabolu Head, warned Pierre off using his newfound brush while the Manhunter from Mars dealt with his creation.

Once the first threat was resolved, the Manhunter was directed to Henri, who had already completed and unintentionally unleashed two supernatural masterpieces of monstrosity, "All-Seeing Seaweed" and "Nightmare on the Wing." J'onzz was able to destroy the first tentacled creature with relative ease for an Alien Atlas, but the second avian adversary was quite invulnerable to his abilities. The four-winged bird-thing evaporated anything caught under its wake, so to minimize casualties, J'onzz had Henri paint an effective adversary for the "Nightmare." This harpooned whale devoured the bird-creature "in a dying surge of strength," and the Manhunter collected the evil brushes.

Created by Jack Miller & Joe Certa
Posted by Diabolu Frank at 8:08 AM

Argh! I finally got back to these, and now work is forcing me to phone in posts this weekend again. Sorry.

Quite alright! -I thought you had finished these entirely...

Haven't checked the count lately, but there's something like 4-6 left in the Diabolu Head series.